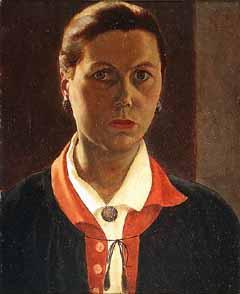 Esther Gwendolyn (Stella) Bowen was born in Adelaide on 16 May 1893. She enjoyed drawing and convinced her mother to allow her to study with Margaret Preston. However, her desire to pursue art training in Melbourne was thwarted by her mother's ill health and reluctance to let her daughter follow such a career.

When her mother died in 1914 Stella left for England with a return ticket and an allowance of £20 per month. In cosmopolitan London, she studied at the Westminster School of Art and mixed in the exhilarating company of writers, artists, poets and political activists.

In 1917, Stella met and fell in love with the writer Ford Madox Ford. She was twenty-four, he was forty-three. The couple fled to rural England where their daughter Julie was born in 1920. But by 1922 the family were fed up with the hardships of life in the English countryside and moved temporarily to France. They soon decided to remain in France and moved to Paris.

Caught up in the bohemian café society of Paris, Ford started a literary magazine and was a leading figure among the expatriate writers. Bowen, meanwhile, found her first studio but managed little time for painting in between attending to the needs of Ford and their daughter.

Stella separated from Ford in 1927. It was a difficult time for her but it did give her the time and space to pursue her art. She began to gain some portrait commissions but still struggled to earn enough money. In 1932 she went to the United States at the invitation of friends, who helped her in finding painting jobs. Returning to France she found she could not afford to remain in Paris and returned to England on her fortieth birthday.

The Second World War brought a surprising, new chapter in Stella's career. In 1944 she was appointed an official war artist by the Australian War Memorial. Her brief was to depict the activities of the Royal Australian Air Force (RAAF) stationed in England. She also painted portraits of military commanders and Australian prisoners of war who had recently been repatriated from Europe. One of the first women artists to be appointed, Stella completed her last painting in 1947. She died later that year, having never returned to Australia.