The Memorial opened its Sculpture Garden in January 1999. The Garden is located to the west of the main building and offers a place for quiet contemplation of the sacrifice of the many Australians who have died in war.

The Garden contains memorials to the British Commonwealth Occupation Force, Australian servicewomen, Australian Merchant Seamen, Bomber Command and Sandakan. There are also many plaques in memory of particular units.

One of Canberra's best loved icons, Sir Bertram Mackennal's War (or Bellona, as it is better known) is located near the Lone Pine tree. This tree was raised from one of the seeds of a pine cone sent home by an Australian soldier at Gallipoli to his mother. It was planted at the Memorial in 1934 in memory of all the sons of Australia who fell at Lone Pine. 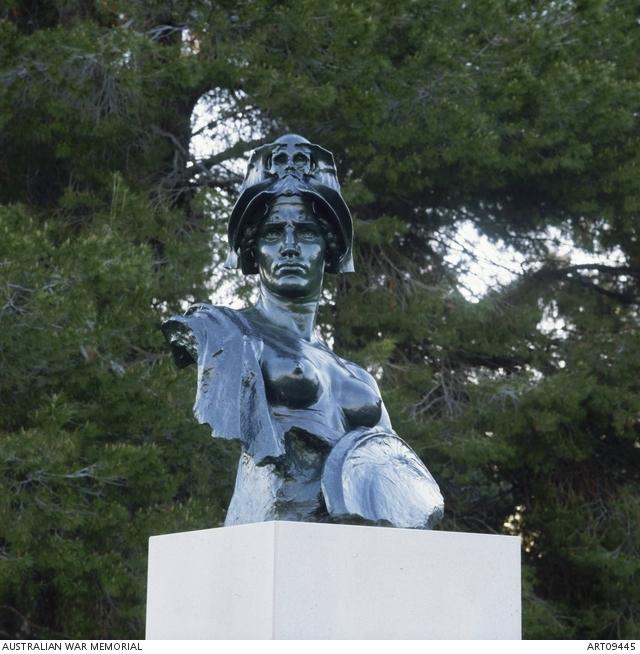 This memorial commemorates the service and sacrifice of Australian merchant seamen who manned ships in all ports of the world during the First and Second World Wars.
ART27987

The Bomber Command memorial commemorates the service and sacrifice of the RAAF air and ground crew who served and died with Bomber Command during the Second World War.
ART92683

Whereas more conventional war memorials may incorporate a cenotaph or a representative figure, Anne Ferguson has created a bare platform of coloured stones, divided in two by a curved trench that resembles an aerial view of a river, carving its way through a sparse, flat landscape.
ART90968

The Sandakan memorial is a sculpture commissioned by the Australian War Memorial to acknowledge and remember those who died during the Sandakan death march, Borneo in 1945 . Designed as an accurate sundial, the memorial is rich in symbolism. ART92680

The *Animals in War Memorial *is a joint project between the Australian War Memorial and the Royal Society for the Prevention of Cruelty to Animals (RSPCA). The memorial commemorates those animals that served alongside Australians in all conflicts. It recognises the practical and psychological roles animals have played during times of war and conflict.
ART93929

Patriotism indicates Montford's application of Edwardian Classicism, a symbolic memorial to the fallen of the First World War. The base of the group represents the prow of a ship, drawn on wheels by lions, the child between them representing generations unborn who will be heirs to the spirit of freedom.
ART41009

Bringing up the guns

A bronze panel depicting members of a gun crew pushing and pulling an 18 pounder gun up a slight incline. This work is taken from an original plaster cast of one of four bronze bas-relief panels commissioned from Butler-George for the base of the pedestal of the Second Division AIF Memorial at Mont St Quentin, France in 1918. The work was cast in bronze in 1995 and was installed in the Western Courtyard of the Australian War Memorial sculpture garden.
ART90405

This work is taken from an original plaster cast of one of four bronze bas-relief panels commissioned from Butler-George for the base of the pedestal of the Mont St. Quentin Memorial in France in 1918. The bronze panel, cast in 1996, depicts an attack by the 2nd Division Infantry. The panel is installed in the Western Courtyard of the Australian War Memorial sculpture garden.
ART90536

Elevation of the senses

This sculpture commemorates the vital role and contribution of Explosive Detection Dogs and their handlers in war. The tunnel through the base of the sculpture alludes to the rigorous training undertaken by the dogs, while the rocky outcrops atop the columns represent the foreign landscapes to which the dogs and their handlers are deployed.
ART96850

The War Correspondents Memorial honours the journalists, photographers, film and sound crews, writers and artists who have travelled to war zones to record the horrors of battle and the Australian experience of war. ART96849

Artist Daniel Boyd, a Kudjla/Gangalu man from North Queensland, and Edition Office Architects have been commissioned to design a new sculpture for the Memorial Sculpture Garden. Planned to be constructed in late 2018, the work, titled For Our Country commemorates the military service and experience of Aboriginal and Torres Strait Islanders who have fought to protect their country.

In 2016 the Australian War Memorial commissioned a new public sculpture to commemorate the contribution of General Sir John Monash (1865–1931) to Australian military history and society. The successful design was submitted by Brisbane artists Charles Robb and Sarah Holland-Batt. The sculpture was dedicated by Lieutenant General Angus Campbell AO DSC, Chief of Army, in a public ceremony on 4 July 2018, on the 100th anniversary of the Australian victory at the battle of Hamel.
See more.