During the Second World War, salvage work was undertaken on a massive scale by the military.  The work of salvage units involved the collection and re-distribution of highly valuable re-usable materials, and making new and re-conditioned equipment out of salvaged material. The working conditions for salvage units were often extremely difficult: punishing climates, extended times in remote areas, and the threat of tropical diseases such as malaria and dysentery. The men often had little or no effective protection against deadly enemy actions. The extraordinary story of the 7 Division Salvage Unit’s experiences are recorded in their unit war diaries, now digitised and available here.

7 Division Salvage Unit spent the early years of the war in Australia, learning its work, assisting other units and civilian salvage operations, and becoming familiar with army life. Its work involved digging air-raid trenches at civilian sites such as at Girton Girls’ School in Adelaide. The men attended training lectures and factory-inspection tours and went on route marches as an economical way of covering short distances to new work sites.

7 Division Salvage Unit was sent overseas for a short deployment to support the Middle East campaigns in 1941.  Stationed in Lebanon and Syria, its work included frequent moves between Allied camps throughout the region. It transported salvaged materials to storage facilities in Beirut and worked with a bulk petrol company unit to ensure safe storage of fuel supplies. On 1 February 1942, it departed Suez for the voyage to Australia.

On 9 February 1942, the unit returned to Australia, and in March began work at Fisherman’s Bend in Victoria, handling and re-directing cargoes of salvaged materials, some of which were used in building coastal anti-aircraft dug-outs. It retrieved a load of hessian material from a sunken steamer and tested salvaged materials such as oil-processing plants marked for re-use.

By August 1942 the New Guinea campaign was making greater demands on military planning and resources. The unit’s commanding officer, Lieutenant Percy C Jacques, was briefed and received new orders. 7 Division Salvage Unit embarked from Brisbane and arrived in Port Moresby on 17 August.  The conditions it faced in New Guinea presented many serious challenges and hardships.

The landscape of New Guinea features steep mountain ranges, coastal swamps and hazardous ravine rivers prone to sudden floods. In coastal areas rivers were infested with malaria-carrying mosquitoes and deadly crocodiles. The dense jungle made movement difficult. In these conditions, maintaining health and fitness was nearly impossible and the demands of supporting combat units were exhausting.

The unit served in and around the Ramu Valley and the Finisterre Ranges, with Japanese forces never far away. 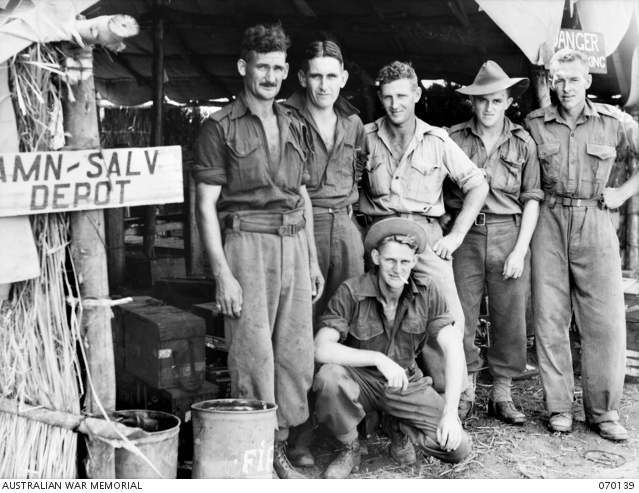 By January 1945, the unit was back in Australia, based at Kairi in the Northern Tablelands of Queensland. There were frequent rest days, inter-unit sports such as cricket matches, and working without enemy action. Lieutenant Jacques paid visits to other units to aid inter-unit diplomacy, and a considerable amount of salvaged material was moved between stores.  In late March, the unit was able to attend Easter Weekend church services.

Being back in Australia didn’t shield the men from risk: in Tropical North Queensland, they had to contend with frequent downpours and high humidity, corrosion risk to re-conditioned vehicles, and had to ensure that vaccinations for tropical diseases were kept up to date. Cholera gets a specific mention in the unit’s diary.

In May 1945, news of victory in Europe arrived and arrangements were made for celebrations on 9 May. Soon afterwards, it was time to start preparing for another stint overseas. A month later the unit embarked on an American ship sailing to Morotai, Borneo.  From there, it travelled to Balikpapan for its last major deployment. Here the men received news of the Japanese surrender in August 1945. 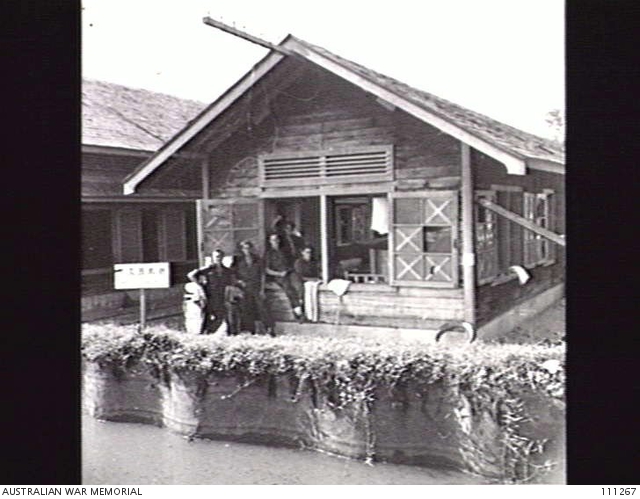 Members of 7 Division Salvage Unit outside the house they occupied in Balikpapan, Borneo, 6 July 1945. Photographer unknown.

Victory in the Pacific didn’t mean that work was over, although it did become less dangerous. 7 Division Salvage Unit had to continue dealing with massive amounts of salvaged material. Motor-vehicle tyres, searchlights and discarded Japanese bicycles salvaged in large numbers resulting in huge piles of materials to manage for an unknowable duration.

The men finally returned home from Balikpapan on the Morton Bay, arriving in Sydney on 19 December 1945; home in time for Christmas.  In 1947, Lieutenant Percy C. Jacques was Mentioned in Despatches, recognising his valuable, brave and dogged contribution to the war effort in Australia and on active service in the Middle East, New Guinea and Borneo. 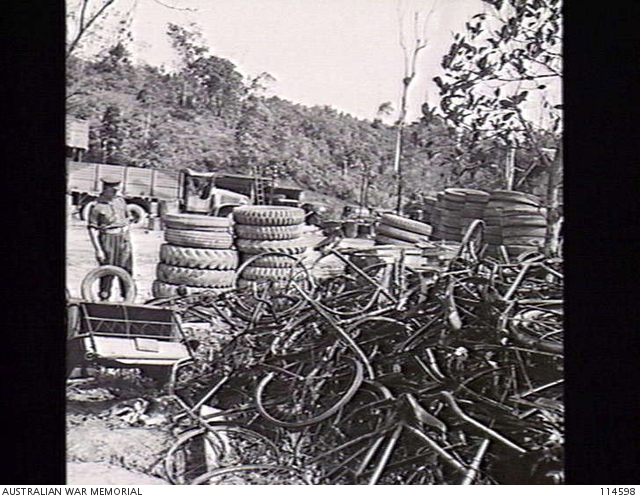 The digitisation of the 7 Division Salvage Unit war diaries is part of the Memorial’s project to digitise the holdings of Second Australian Imperial Force and Citizen Military Forces unit war diaries from the archival series AWM52.