A Battery of Cameras

The formal surrender of Japan was signed aboard USS Missouri in Tokyo Bay on 2 September 1945. Following this there were a number of localised surrender ceremonies across the South-West Pacific Area of operations, responsibility for which was divided between the Allied commanders.

On 9 September 1945 General Sir Thomas Blamey, Commander-in-Chief of the Australian Military Forces, presided over a ceremony at Morotai in which he accepted the surrender of the Japanese 2nd Army from Lieutenant General Fusatarō Teshima. It was attended by a large crowd of personnel – mostly Australian, but also from the Netherlands, India and the United States. The Australian troops received printed souvenirs as keepsakes, which ensured this momentous event was remembered in many Australian households. One man took away a different record of the occasion, a 16mm film which he shot on his Kodak model B cine-camera.

Lieutenant Graham Smythe, of the Royal Australian Engineers, an enthusiastic amateur filmmaker from Victoria, filmed the proceedings on his personal cine-camera. He is visible in several of the photographs taken during ceremony, very close to the official party, his cine-camera standing out from the stills cameras surrounding him. 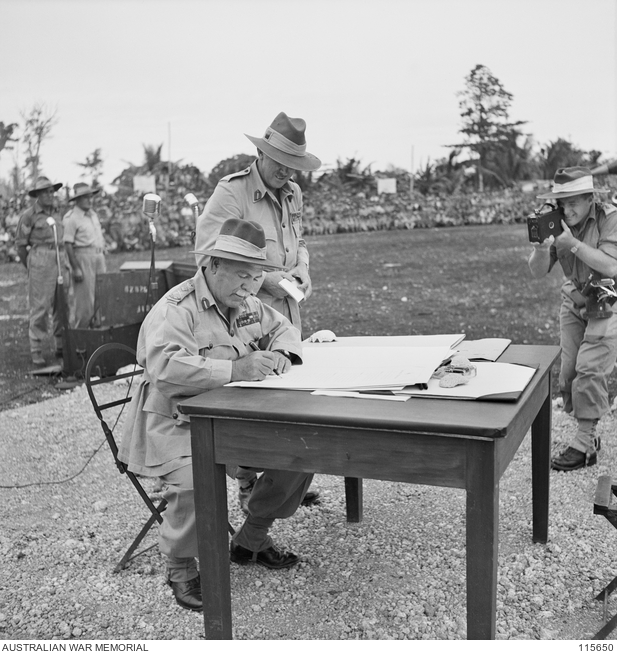 It is not clear how Smythe came to capture his motion picture footage of the Morotai surrender: had there been a formal request for the known cine-enthusiast to attend, as all official cinematographers were busy elsewhere? Was he plucked out of the crowd of onlookers when it was noticed that he had a cine-camera? Or did he simply join the throng of soldiers who in contemporary newspaper reports are said to have surged past the provosts with a “battery of cameras”, intent on capturing their own piece of history? 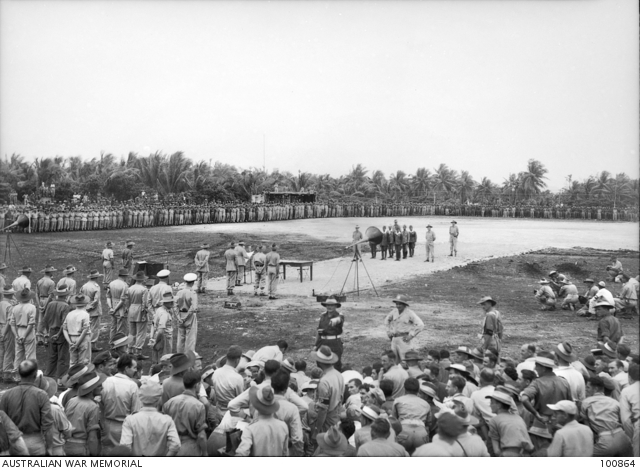 A group of cameraman at the Morotai surrender ceremony. Photographer: WAH Wonnacott)

However the film came to be made, it is the only footage of this ceremony, a unique personal record of this official occasion which many Australians have seen only as still photographs. In the 1990s Smythe donated his 16mm film the Australian War Memorial, where it complements other collection items relating to the Morotai surrender. You can view his film here:

Watching the film you’ll notice that it is spliced together with other footage taken by Smythe during his service in the Netherlands East Indies. The domestic nature of the Kodak cine-camera meant that it had no capacity to record sound, so the footage is silent; however it does contain hand-made intertitles, some of which were made by Smythe in the field, and others which suggest something of his post-war life as he projected this film for interested parties at home. 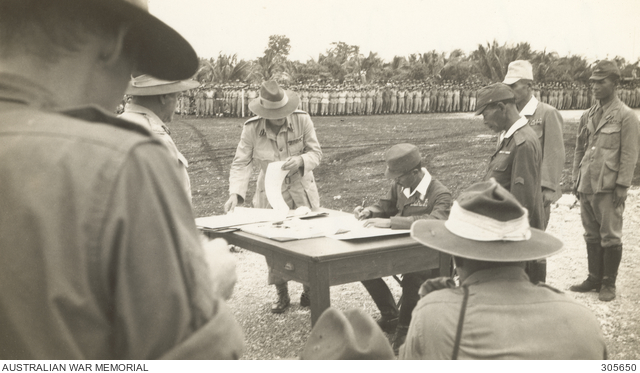 Smythe is crouched in front of this photographer filming as Teshima signs the Instrument of Surrender.

If you enjoy a sound track to accompany a film, you can listen to an ABC audio recording S00137 in which Captain Ivan Layton, Staff Captain to General Blamey, describes the surrender ceremony. The final part of this sound recording is of Blamey’s address to the Japanese. Being able to hear his oft-quoted lines (“In receiving your surrender I do not recognise you as an honourable and gallant foe, but you will be treated with due but severe courtesy in all matters”) while watching footage of him giving the address, offers a hint of what it may have been like to attend the ceremony.

This article is featured in issue 91 of Wartime you can purchase it here.