On 11 November 1991 a crowd gathered around the newly established United Nations compound in Phnom Penh, capital of Cambodia. Those inside had arrived the previous day, making their presence known by raising several flags, one of which depicted a strange animal wearing boxing gloves on a green and gold background. Not recognising it as a kangaroo, the locals thought it might be a rat; but as word got around, the UN compound became known as Pteah Kangaroo (Kangaroo House).

The Australians were the first main body of international troops to arrive as part of the United Nations Advance Mission in Cambodia (UNAMIC), established in October 1991 to observe a shaky ceasefire between warring Cambodian factions, paving the way for a larger peacekeeping mission, the United Nations Transitional Authority in Cambodia (UNTAC). Sixty-five Australian signallers and support staff, including Special Forces, provided essential communications between UNAMIC personnel in a country with little workable infrastructure.

Cambodia had been subject to decades of conflict, invasion, civil war and genocide – including a devastating US-led bombing campaign in 1973, and Pol Pot’s brutal Khmer Rouge regime, estimated to have killed 1.7 million people while in power from 1975 to 1979. 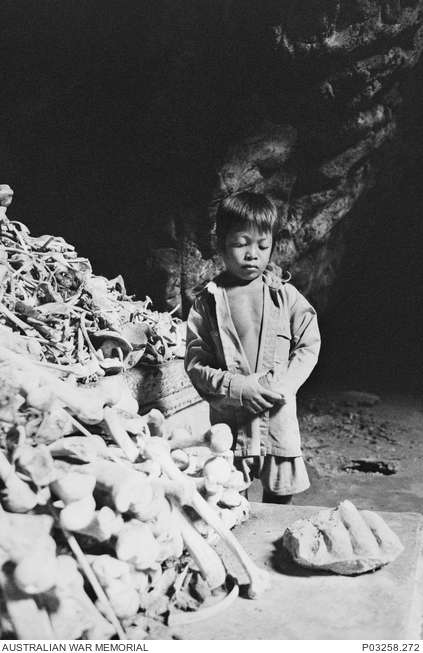 The Khmer Rouge was responsible for the death of nearly two million Cambodians. The bodies of these victims were thrown into a cave. Photograph by Heide Smith.

By the late 1980s, the country remained divided and its people were suffering. Competing internal and foreign interests left vast areas of the country ruled by four competing factions. Hundreds of thousands of Cambodians lived as refugees along the border with Thailand in immense, lawless camps, subject to frequent attacks. Squalid conditions led to widespread malnutrition and disease; one of the camps had an outbreak of bubonic plague. Australian Federal Police Officers, Superintendents Barry Carpenter and Bill Kirk, worked as part of a small international team to restore law and order to the camps from 1989. From late 1991, concerted international diplomatic effort allowed for a larger peacekeeping operation to begin and the stage was set for the Australians to deploy. 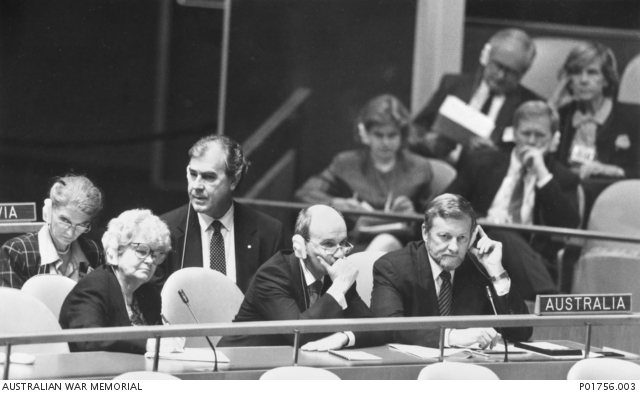 Gareth Evans (right), Minister for Foreign Affairs and Trade at the United Nations, September 1992. Australians diplomats played a prominent role in bringing the warring factions to the negotiating table.

The Australians in UNAMIC (codenamed Operation Goodwill) served in Phnom Penh and in small detachments throughout the countryside. Their role was essential: the UN mission was to report on the shaky ceasefire, and working communications were necessary to ensure that violations were reported and dealt with, preventing the escalation of conflict. 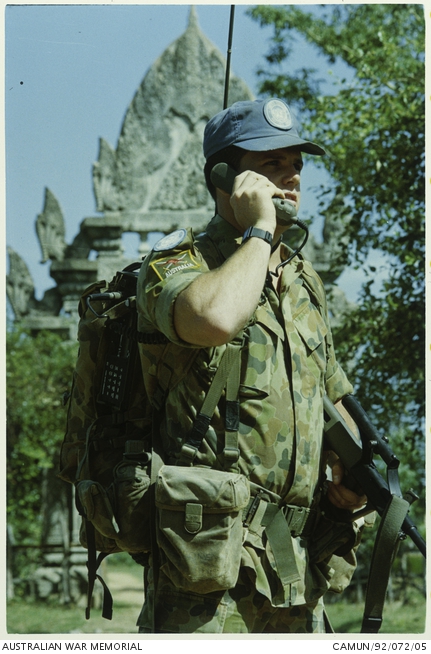 The Australians became caught between police and protestors during violent demonstrations. On 26 February 1992, commander of the Australian contingent Lieutenant Colonel Russell Stuart was struck by small arms fire and seriously wounded during a helicopter reconnaissance flight.

On 14 March 1992, UNTAC replaced UNAMIC, which continued to oversee the ceasefire while preparing for elections to help bring an end to factional violence. More than 1,100 Australians served in UNTAC (codenamed Operation Gemini), the UN military component of which was commanded by Australian Lieutenant General John Sanderson. Australia provided the Force Communications Unit, and deployed a movement control unit and electoral staff. In May 1993, six Australian Black Hawks, supported by an infantry platoon, joined the growing international force to provide additional security and transport capabilities.

Those who served were subject to attacks, most notably from the Khmer Rouge, but they were successful in their mission: 4.1 million Cambodians, 90 per cent of the country’s registered voters, cast ballots in the May 1993 elections – the first election in Cambodia since the 1950s. 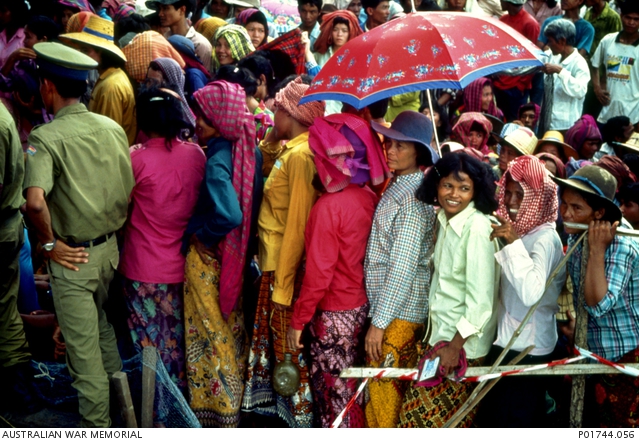 Cambodians line up to vote, May 1993. Photograph by George Gittoes.

The Australian War Memorial’s Development Project will be sharing the stories of a new generation of Australian men and women who have served our nation in recent conflicts, and on peacekeeping and humanitarian operations. To share your story email: gallerydevelopment@awm.gov.au