This is one of a series of blogs about First World War uniforms and covers the basic aspects of badges seen on Australian Imperial Force uniforms. It does not cover unofficial unit badges, or qualification or proficiency badges. These may be covered at a later date. 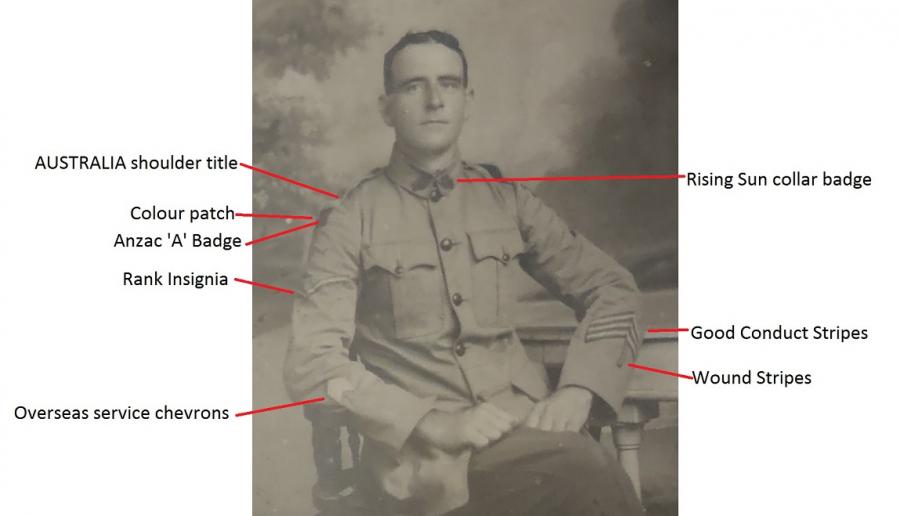 Australia, unlike most other Commonwealth countries, did not adopt metal regimental badges during the First World War. All units were issued with the Australian Army General Service Badge, better known as the ‘The Rising Sun’ badge. The badge was already in use before the war, this version having been approved in 1904, but became so widely known during the First World War and into the Second, that it is now almost always identified with the First and Second AIF. After the Second World War, a new version of the Rising Sun badge was approved in 1949. 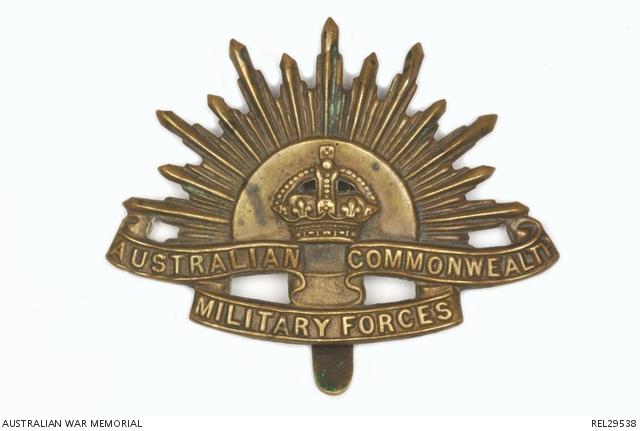 Light Horse Rising Sun hat badge, with a slide on the reverse instead of lugs. 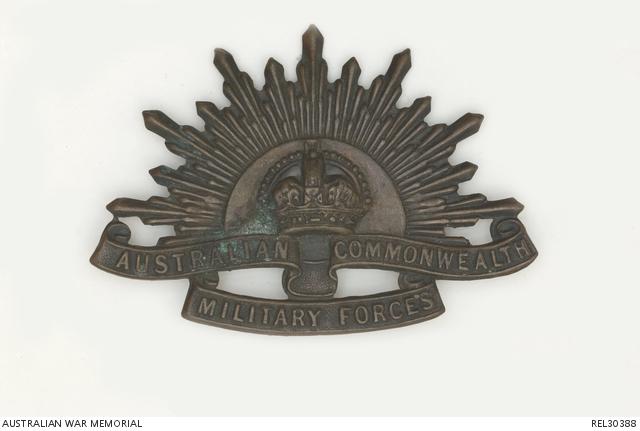 Rising Sun hat badge with lugs on the reverse. 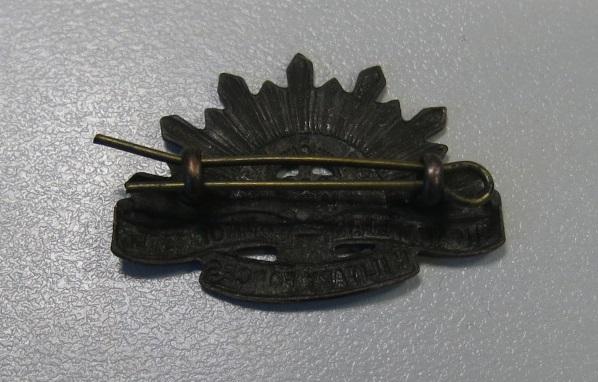 An exception was made regarding the wearing of the General Service Badge by Australians overseas for some members of the artillery: ‘In the case of personnel of the 1st and 2nd Australian Siege Batteries and Artillery personnel serving with HQ 36 (Aust) Heavy Artillery Group and reinforcements thereto , the hat, cap and collar badge will be the ‘RAA’ scroll in oxidised copper in lieu of the Commonwealth badge.’ These men were regular soldiers of the Royal Australian Artillery first sent from Australia in mid July 1915.

All ranks wore an 'AUSTRALIA' title at the base of their shoulder straps.

As the AIF did not use regimental badges, distinctive insignia on uniforms was required to identify the wearer’s unit. In September 1914 it was announced that oxidised copper letters and numerals would be issued for wear on the collars of officer’s tunics and on the shoulder straps of other ranks. 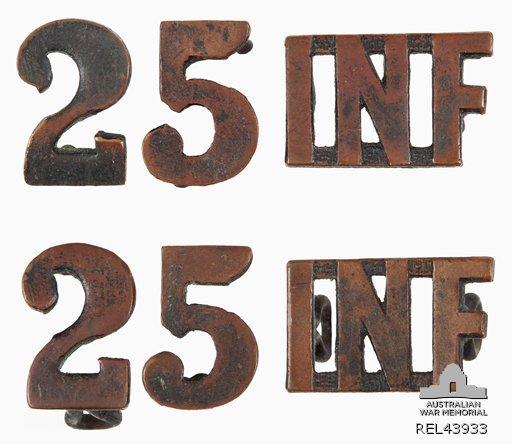 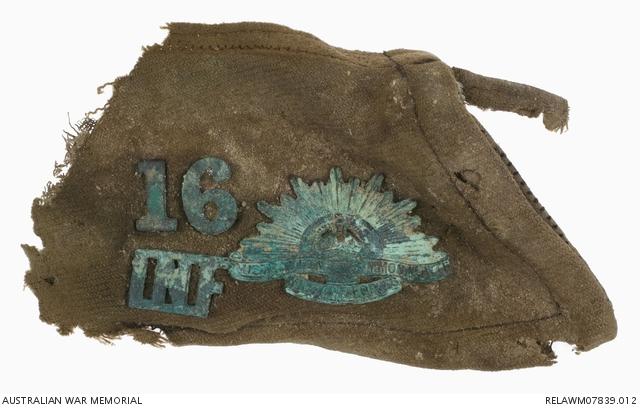 Collar from an officer's uniform showing the unit titles for the 16th Battalion. 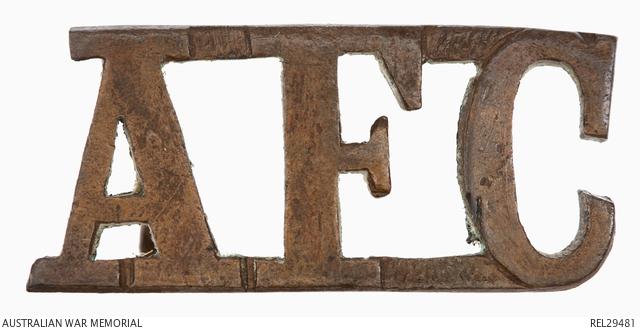 In March 1915 a new scheme of unit identification was devised to replace the wearing of unit titles. This consisted of cloth colour patches on the upper arms of a soldier’s tunic. The shape and colour of the patches indicated the wearer’s unit and when the AIF was doubled in 1916, the colour patches of the new units reflected those of the parent units: 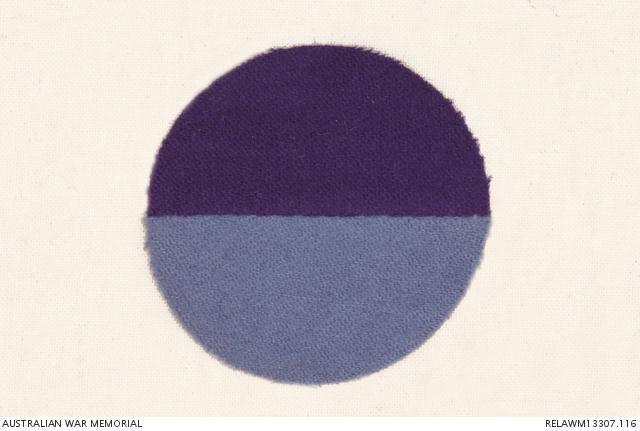 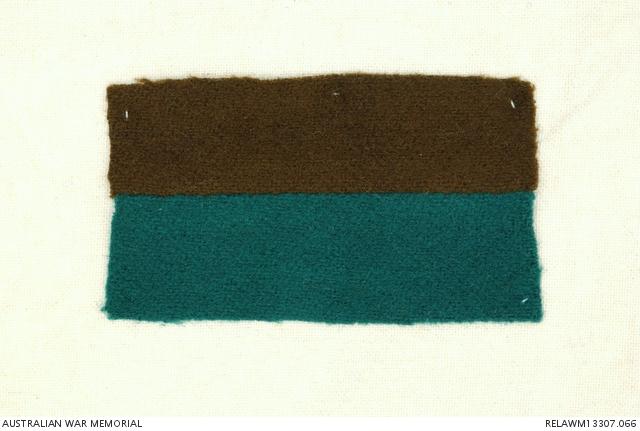 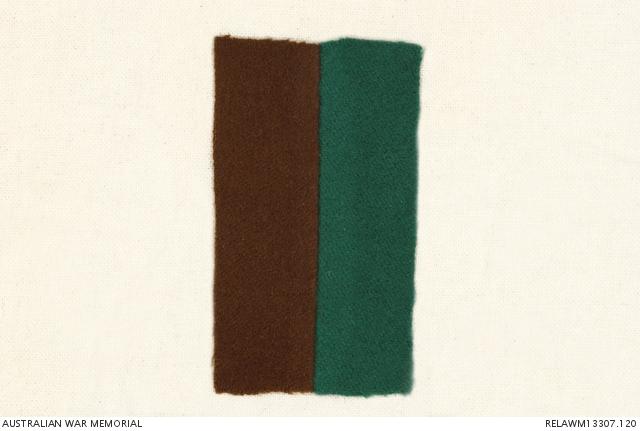 The colour patch had its origin in the system of flags used to mark tent lines and unit areas during the early months of the war. The colour patches were first issued to the infantry in March 1915. Interestingly, many units were still wearing their metal unit titles when they landed at Gallipoli on 25 April 1915. In some instances this was due to insufficient patches being available, in other instances some men wore both the colour patch and the unit title. It is not unusual to see photographs of soldier taken late in the war, still wearing their metal unit titles. 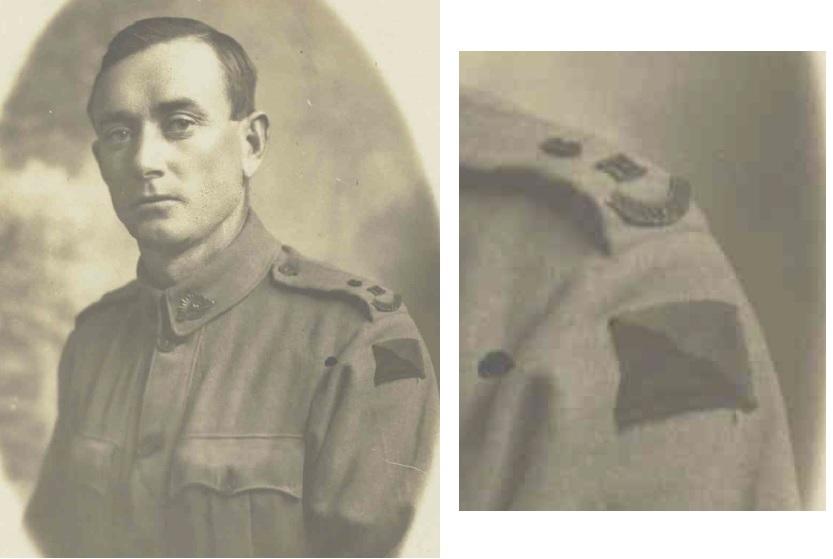 The AIF also wore badges of rank on their uniform. Officers wore their rank on their shoulders whilst Warrant Officers and NCOs wore theirs on the sleeve of their right arm. Staff officers had red gorget patches, called ‘red tabs’, on their collars and a red hat band on the peaked cap. 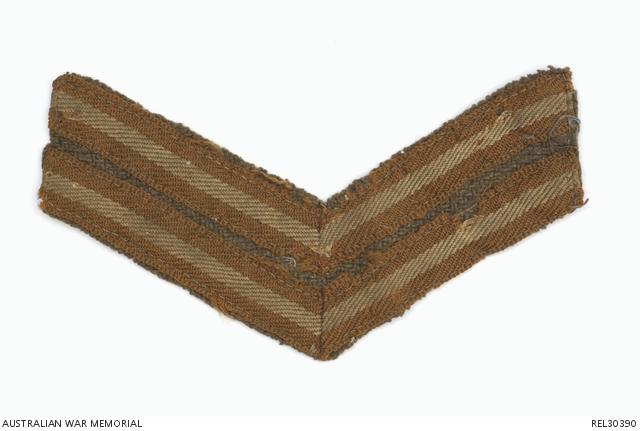 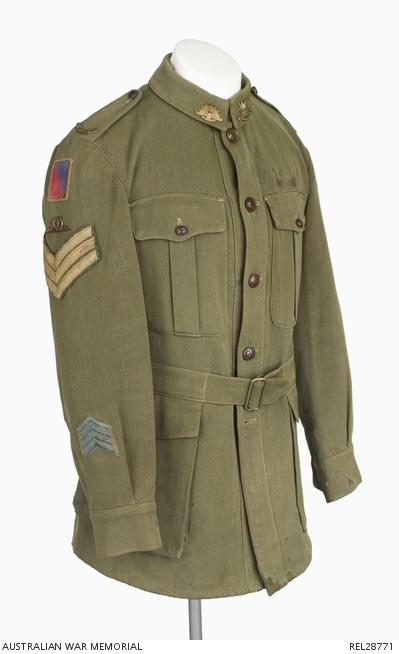 Uniform with Sergeant's chevrons on the upper right arm. 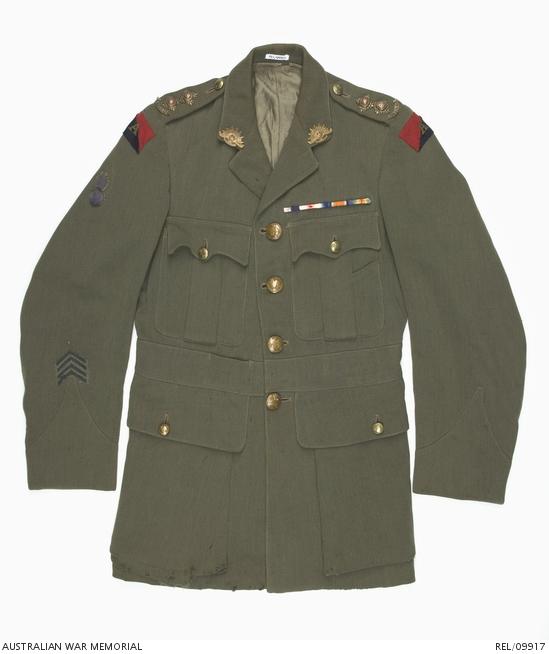 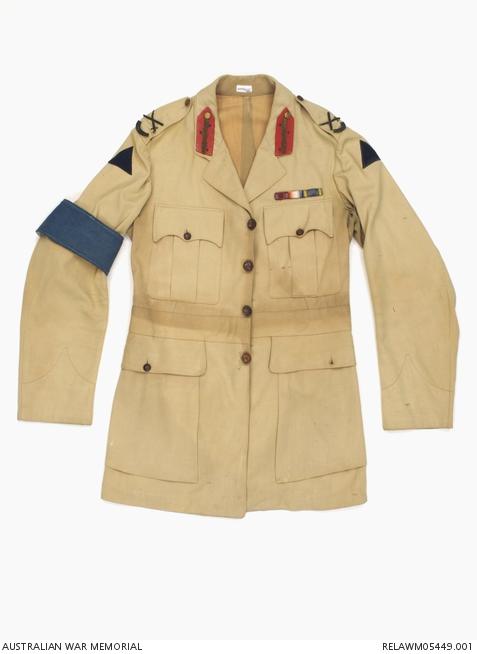 A Brigadier General's uniform with rank insignia on shoulder straps (crossed sword and baton) and embroidered red gorgets ('tabs') on the collar.

In March 1916, AIF Orders announced that the only badges to be worn by Australians were hat and collar badges, unit colour patches, badges of rank and the curved metal titles ‘AUSTRALIA’ on the shoulder straps. Some months later approval was given for another badge; the wound stripe. This was a strip of narrow gold Russia braid, two inches in length, worn perpendicularly on the left sleeve of the jacket to mark each occasion a soldier was wounded badly enough to be evacuated from the front line. 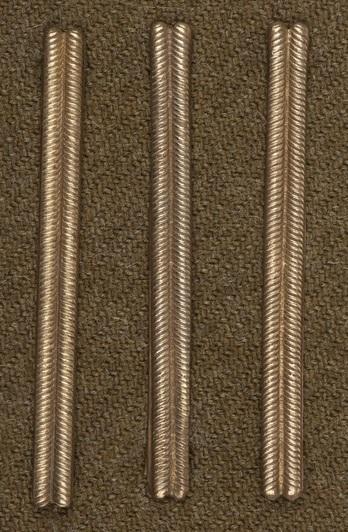 In January 1917 approval was given for long service and good conduct stripes by AIF Warrant Officers, NCOs and men. This consisted of a single khaki inverted chevron worn on the lower left arm for each year of service meeting certain requirements of good conduct. 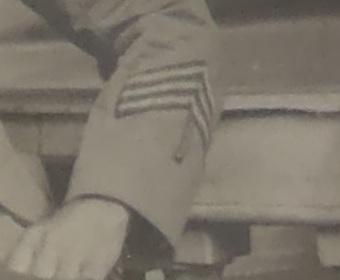 Also in 1917 it was announced that Gallipoli veterans would be entitled to wear a brass letter ‘A’ for Anzac, on their unit colour patches. It is understood that this idea was first suggested by General Gellibrand to General Godley early in 1916, and the badges first appeared later that year. The idea was well received by Anzac veterans who were proud to wear this token of honour they had achieved for the AIF in the 1915 campaign. In January 1918 the right to wear it was extended to service "on the islands of Lemnos, Imbros, and Tenedos, on the transports or hospital ships at or off Gallipoli or these islands or in the AIF line of communications units from Egypt". 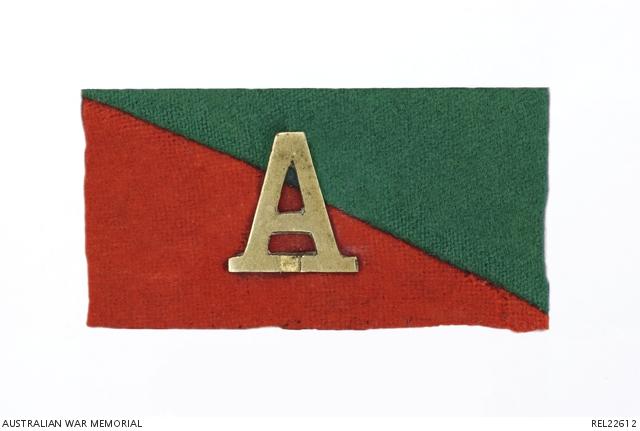 In January 1918 the AIF also approved the wearing of the overseas service chevrons which had been adopted by the British Army. These were embroidered or woven inverted chevrons worn above the cuff on the right arm. Due to a shortage of supply, some men had chevrons privately made. For each year of war service a blue chevron was awarded and those men who had embarked in 1914 received a red chevron to indicate that year’s service. 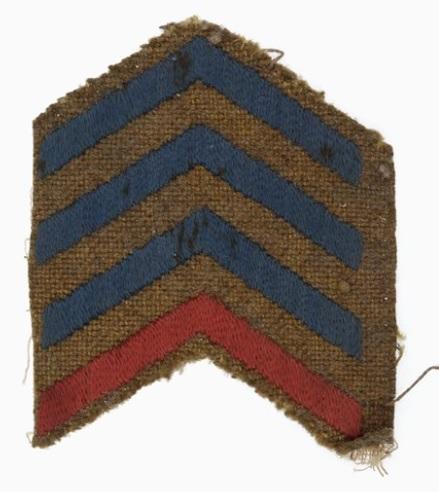 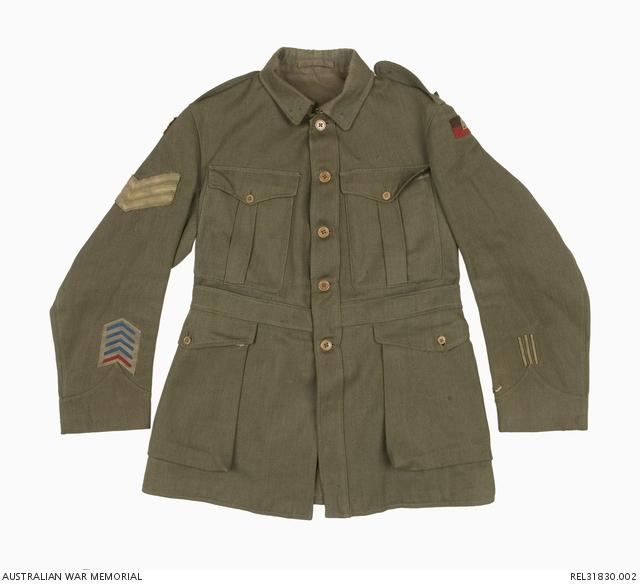 In September 1918, the first of the 1914 enlistees embarked for Australia for 6 months of ‘Anzac Leave’. They were issued with the Anzac rosettes to wear on their uniform so that they would not be accused of shirking their duty, although few appear to have worn them as the war ended not long after they returned home. These were worn on both upper arms, beneath the colour patch. 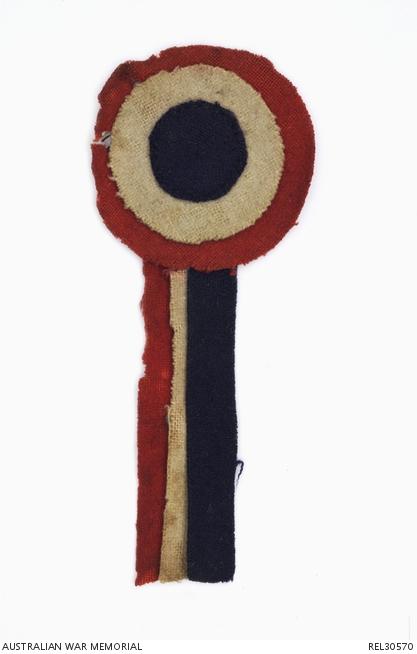 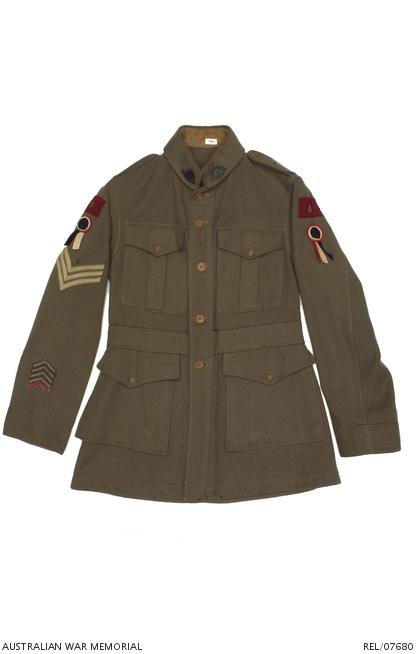