The remarkable events that resulted in the first enemy aircraft to be brought down intact by the Australian Flying Corps (AFC) were marred by the news that two of their own had disappeared in the aftermath of the fierce and fiery battle. 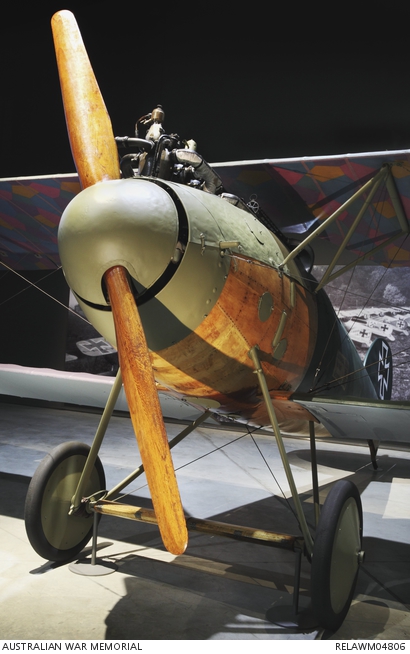 Albatros D.Va D5390/17 on display in the Australian War Memorial's Over the Front exhibition

The story begins in the early afternoon of 17 December 1917, a week before Christmas, on an area of the Western Front near Armentieres where the 21st Battalion AIF was holding a section of the line. At approximately 2.15pm a two man RE8 aircraft, from No. 3 Squadron, AFC flew over the Australian lines to begin its artillery observation patrol. The aircraft was flying approximately two and a half kilometres above the soldiers and was directing heavy artillery fire from the 151st Siege Battery towards enemy lines.

The serial number for the RE8 was A3816 and it had a large individual letter “B” painted on it. The pilot of this aircraft was Lieutenant James Sandy, a senior pilot and one of 3 Squadron’s more experienced airmen. Sitting behind Sandy was his observer, Sergeant Henry Hughes, who was making his first operational flight. Hughes manned a Lewis machine gun in his position in the aircraft which was able to be rotated using the gun mount.  This gun provided the main defence of the RE8; however, the pilot also controlled a forward-firing Vickers machine gun. 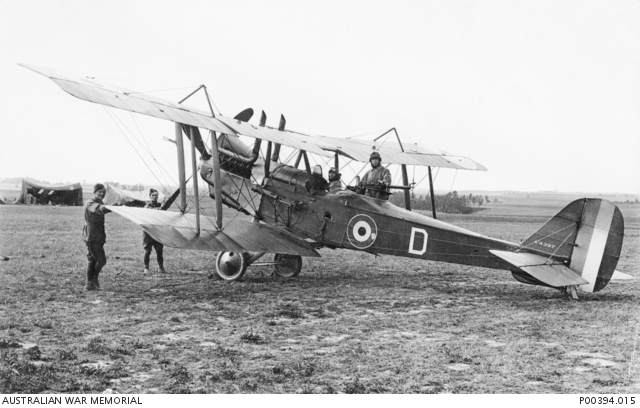 An RE8 from No 3 Squadron Australian Flying Corps

Just over half an hour after Sandy and Hughes flew over the Australian front lines, they were attacked by a formation of six Albatros D.Va’s. The D.Va was faster and more nimble than the RE8, and each carried a pair of forward-firing machine guns. These aircraft were from Jasta 29 and had been transferred to this area several weeks earlier to support the German 6th Armee.

They began to fire at the RE8 being flown by Sandy and Hughes who, being heavily outnumbered, were now in a desperate battle for survival. Watched on by hundreds of men on the ground the RE8 was, against all odds, able to successfully defend itself for some minutes before they managed to shoot down one of their attackers.

The German pilot of this aircaft, Leutnant Rudolf Clausz, landed Albatros D5390 intact in the lines of the 21st Battalion. The surprised Australians scrambled out, grabbed Clausz and dragged him back under cover. Clausz had a minor wound in the thigh from anti-aircraft fire and was taken to the headquarters of Major Alfred Reed of the 21st Battalion who souvenired Clausz’s flying boots while the latter’s wound was being bandaged. After treatment Clausz become a prisoner and returned to Germany after the war.

The Albatros had been struck by a bullet in its petrol tank and was recovered after dark by a party of ground staff under the direction of Captain Roderick Ross, the No. 3 Squadron Engineering Officer. Working quickly under shell fire, they successfully dismantled the Albatros, packed it onto several vehicles; arriving at 3 Squadron’s aerodrome at Bailleul in the early morning. By daylight the punctured fuel tank and some other light damage had been repaired. The re-assembled Albatros was then posed in front of the hangars. 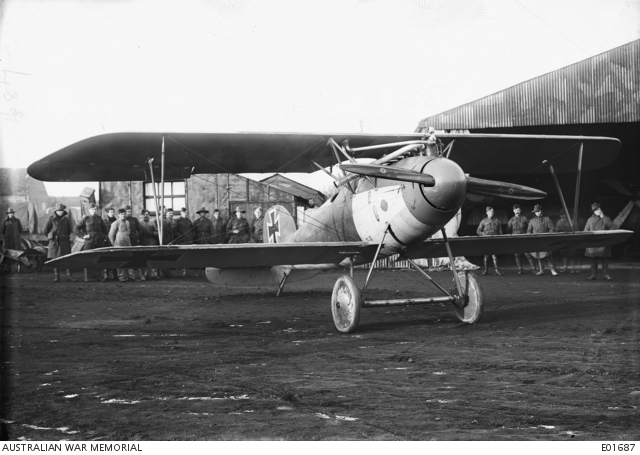 Albatros D.Va D5390 on display in front of the 3 Squadron hangars at their aerodrome at Bailleul

The machine was then taken to the Repair Park at 1 Air Supply Depot at St. Omer before being sent back to England where it was given the identity G/101 and carefully examined. It was an intelligence coup to have captured such a modern aircraft. This particular Albatros had only been manufactured a few months previously and remained the most numerous and important German fighter of the war until the Fokker D.VII was introduced in 1918. 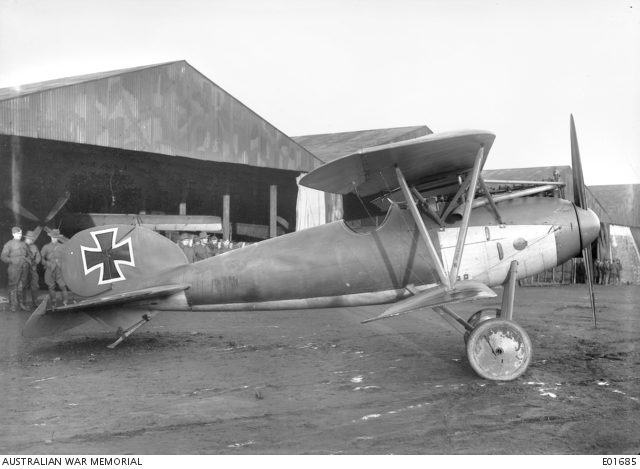 Albatros D.Va D5390 on display in front of the 3 Squadron hangars at their aerodrome at Bailleul

Returning now to the air battle, Sandy and Hughes continued to fight the remaining German aircraft until another RE8 joined the action and the two observation machines fought together for a further 10 minutes. As a third RE8 flew to join the action, the German formation broke off the combat and flew back to their lines. The second RE8, piloted by Lieutenant Jones flew close to Sandy and Hughes, whose aircraft appeared to be flying normally, and concluded that both men were unhurt and were continuing on with their artillery work. Jones then flew back to 3 Squadron’s aerodrome for more ammunition. All appeared to be well.

No 3 Squadron, having been informed of the remarkable events of the day, forwarded reports to AFC Headquarters and recommendations were drafted for the immediate award of a Military Cross to Sandy and a Distinguished Conduct Medal to Hughes.

However, by 6pm the men still hadn’t returned and despite 3 Squadron sending out numerous telephone messages no trace of the men or their aircraft could be found. It wasn’t until 24 hours later that the mystery of their disappearance was solved; a telegram was received from No 12 Stationary Hospital at St Pol, stating that the bodies of Sandy and Hughes had been found in a crashed RE8 in a neighbouring field.

Captain Ross, who had overseen the recovery of the Albatros, now had the sad duty of examining the RE8, while 3 Squadron’s medical officer examined the bodies of Sandy and Hughes. Both men’s reports were based on their firsthand examinations of the crash scene and both confirm that the previous day’s air battle had a remarkable and haunting conclusion.

In what must have been the last seconds of the fight, a bullet fired from behind the RE8 struck Hughes in the left lung and then passed on to strike Sandy in the base of the skull, killing both men instantly. The RE8, with its flight controls apparently in a neutral position and the throttle high, settled into a series of wide left-hand circles until the petrol ran out and the engine stopped. The theory that the machine continued to fly itself this way is supported by the fact that the wind that day was blowing north-east, which would cause a south west drift. The place where the RE8 was found at St Pol was on an air-line 80kms south-west from the scene of the battle. Without engine power, the RE8 came down in a steep glide with markings on the ground showing that the machine hit it with one propeller blade then the right wing touched the ground and the wind caught the tail and threw the fuselage round in the opposite direction. Ross believed it would have taken about two hours for the RE8 to complete its remarkable flight. This extraordinary occurrence provided a striking example of the inherent stability in the flying characteristics of the RE8 - the aircraft had flown and landed itself without human assistance. 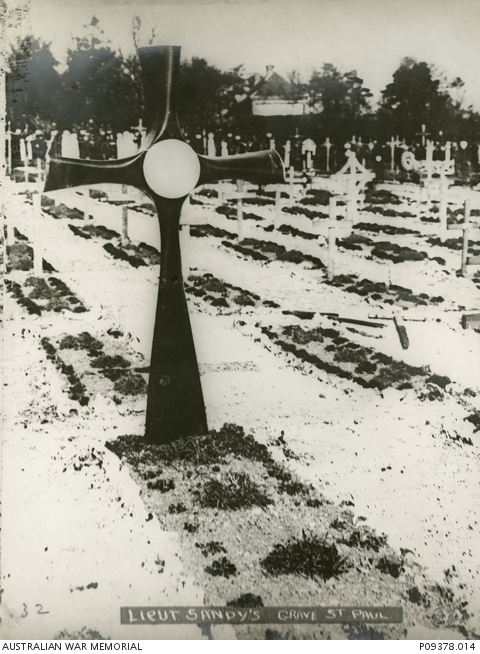 The grave and original headstone for Lieutenant James Sandy

There were no injuries to Sandy and Hughesfrom the crash, and both men were buried at St Pol Communal Cemetery on 21 December 1917. Although found fairly intact, the RE8 was too badly damaged to repair and was reduced to parts.

After the Albatros was recovered by 3 Squadron it was sent to England. The AIF Headquarters in London lodged a claim for the aircraft as a war trophy with the UK War Office which was agreed to and during the early part of 1918 it was displayed at Australia House in London. In May the aircraft was packed for shipping to Australia. After arrival it was displayed by the AWM at the Melbourne and Sydney Exhibition Buildings and from 1941 when the Memorial in Canberra was opened the Albatros was one of the original exhibits in Aircraft Hall. It has been on display as part of the Over the Front exhibition since 2008. 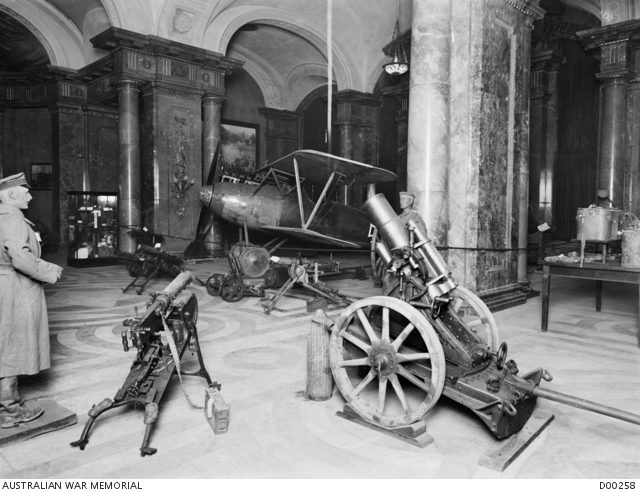 In more recent years the Memorial has been in contact with descendants of James Sandy, who have generously donated some of his material. One of these items is a mounted grave marker, which is on display in the Over the Front exhibition. This was the original marker on Sandy’s grave at St Pol. His original headstone was a propeller and this marker was mounted on it. When his official Imperial War Graves headstone was installed the grave marker was sent to his family. The marker was made by Air Mechanic Second Class Harold Edwards, an instrument fitter from 3 Squadron AFC. Edwards went on to make the grave marker for Baron von Richthofen's original grave cross as well. 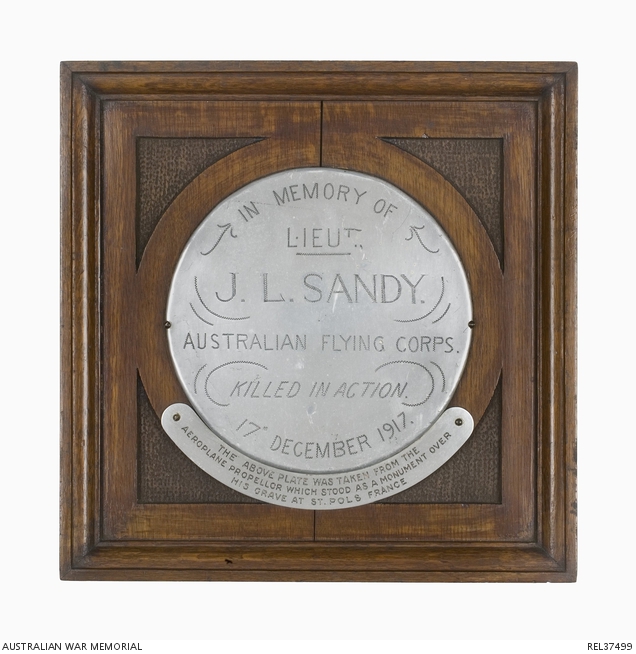 While recommended for awards, Sandy and Hughes were not awarded them.  According to the 3 Squadron Unit Diary once the mens’ deaths had been established, their recommendations had to be withdrawn, as they could not be awarded posthumously

The flying overboots souvenired from Rudolf Clausz by Major Reed were donated to the Memorial by Reed in 1920, these are on display in the Over the Front exhibition also, next to the Red Baron display. 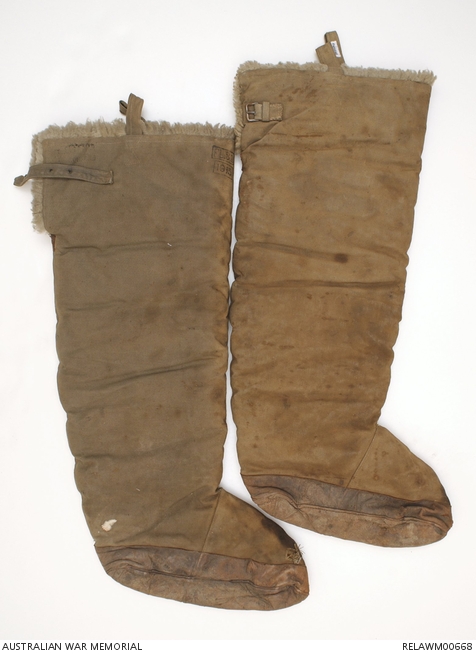