The Role of Catalinas in Australia’s War in the Pacific

It is often said that the Consolidated PBY Catalinas were to Australia what the Supermarine Spitfire was to Britain. With an ability to fly long hours at a low altitude at a slow pace (ideal for mine placement), it was one of the most important Allied aircraft of the Pacific War. 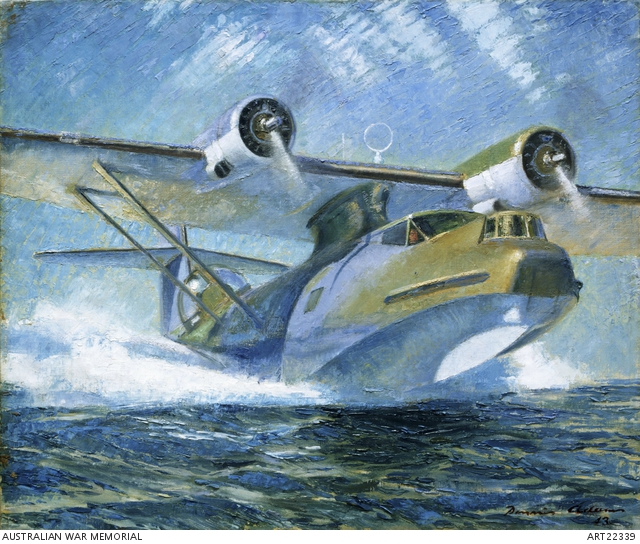 At the outbreak of the Second World War, Australia’s premier flying boat squadron, No.10 Squadron, was in the United Kingdom taking delivery of British-built Short Sunderland aircraft. With the outbreak of war, however, the squadron remained in Britain at the request of the British government for the duration of the war. This loss of No. 10 Squadron saw the need for a new flying boat squadron in Austrlaia. No. 11 Squadron was formed on 25 September 1939, equipped with a small selection of Supermarine Seagulls and Short Empire flying boats.

Due to a shortage of long-range flying boats available to Australia from the United Kingdom, during the first half of 1940 Australia looked to the United States to supply modern flying boats. The American solution was the PBY Consolidated Catalina, beginning with the PBY-5, then PBY-5A variants.

No. 11 Squadron was equipped with 6 Catalinas in 1941, becoming the first Australia squadron to fly the “Cats” as they were commonly known. With the establishment of No. 20 Squadron on 1 August 1941, five of No.11 Squadron’s original six Catalinas were transferred, leaving the squadron with a small remaining fleet of Short Empire flying boats (the precursor to the Short Sunderland). With the delivery of new Catalinas in November 1941, No. 11 Squadron replenished its fleet. The two squadrons retained a strong working relationship, with joint ventures including searching for survivors following the sinking of HMAS Sydney (II). Until 1943 combinations of crew and aircraft belonging to the two squadrons would often interchange as need arose. 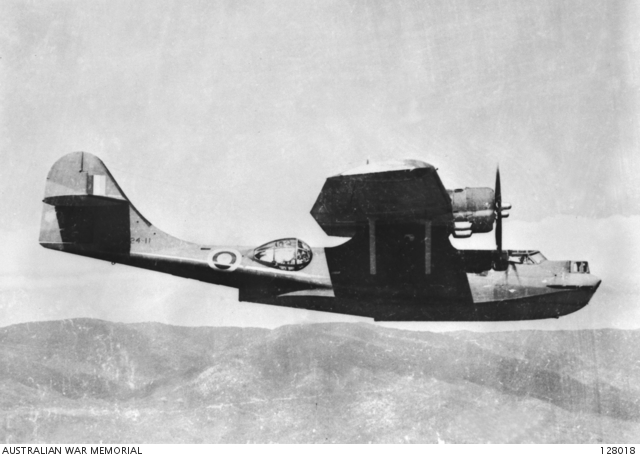 Initially based at Port Moresby, in the early months of 1942 the squadrons made bombing runs over newly-acquired Japanese territory, particularly Rabaul. Warrant Officer Albert Bates describes some of the bombing runs that took place in early 1942, describing difficulties such as fatigue, enemy gunfire, and the aircraft’s likeness to the Kawanishi H6K Japanese float plane. After a bombing mission to Tulagi on 26 June 1942, a Catalina came under attack from an American Navy Grumann Wildcat, the crew of which mistook the Australian aircraft as being Japanese, citing the red centre in its RAAF roundel and its likeness to the Japanese roundel. This would ultimately lead to the RAAF changing their roundel to a blue circle with a white centre. Following the identification of the vulnerability of the Port Moresby Catalina base in June 1942, both squadrons were relocated to Bowen, south of Townsville.

A medal set from 407016 Wing Commander William Keith Bolitho DFC, Commanding Officer of No. 11 Squadron is held in the Memorial collection. Bolitho was recommended for the Distinguished Flying Cross in June 1943:

Since the outbreak of war with Japan, Flying Officer Boiltho has completed 1,100 hours operational flying against the enemy, including 28 night bombing raids and 32 reconnaissance and convoy patrols, many of which were in enemy controlled waters. In January and February 1942 he made eight night raids on Rabaul.

During a period of 31 days in April and May 1942, he flew on daylight reconnaissance of the Solomons area each day, completing 270 hours flying in the period. On the nights of 8 and 9 October 1942, he made two incendiary raids on Rabaul township involving 36 hours flying in 42 hours. Both raids entailed carrying a hull full of unjettisonable incendiary bombs through a fierce anti-aircraft barrage while caught in searchlights. The bombs were dropped by hand.

At all times this officer has displayed the utmost keenness to engage the enemy and his courage, coolness and determination have been an inspiration to all ranks. 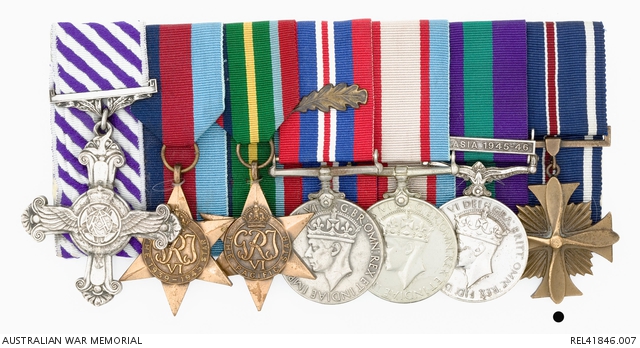 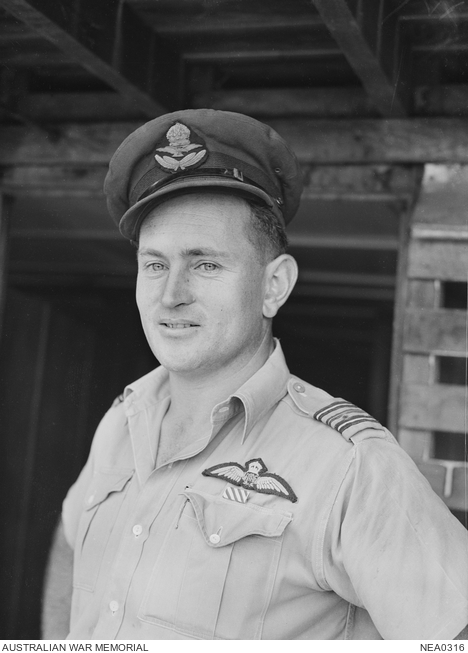 As Catalinas were not the fastest aircraft, they were perfect for such activities as minelaying. Their strength lay in their ability to fly for extended periods. After the fall of Singapore, in 1943 a QANTAS-operated commercial mail run was set up between Perth and Ceylon (modern-day Sri Lanka) with specially-modified Catalinas. Catalinas and their three man crew would often be airborne for up to 30 hours, with the record of 32 hours, 9 minutes completed by the “Vega Star” which departed Ceylon at 8 am on 30 August 1943. This record still remains today, some 76 years later. Fights of 20 hours or more were common among some squadrons, leading to the motto adopted by several Catalina squadrons “the first and the furthest”. 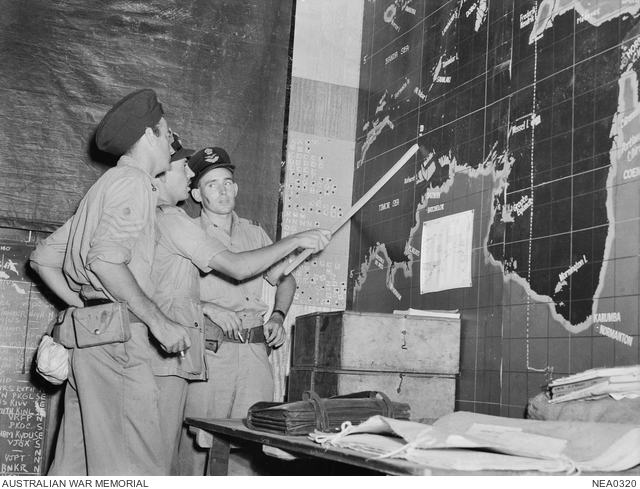 John Thomas Harrison, Members of No.20 Squadron preparing for a flight from Northern Australia, photograph, 19 January 1944.

Following the establishment of the United States Air Force bases around the Pacific, the role of Australia’s Catalinas was redefined, with a larger emphasis placed upon long-range flying capability. While the Catalinas became more heavily involved in mine-laying and long-range aerial reconnaissance, some 70 per pect of RAAF Catalina missions were long-range offensive strikes – many of which would have been out of the range of other aircraft.

The expert mine-laying capacity of Catalinas was highlighted by the role of the “Black Cats” ­– Catalinas painted matt-black that undertook night-time precision mine-laying. Their crews were able to fly as low as a few metres above the water, laying mines within a ten metre radius of their target. Their missions played a major role in crippling the Japanese Navy.

No. 43 Squadron, which flew Catalinas on mine-laying and marine patrol operations, was formed at Bowen on 1 May 1943. After a successful campaign of sea mining around the Netherlands East Indies in early 1944, the RAAF formed No. 42 Squadron in June. These two squadrons combined with No. 20 Squadron and were put under the directive of No. 76 Wing, which was almost entirely dedicated to mine-laying. 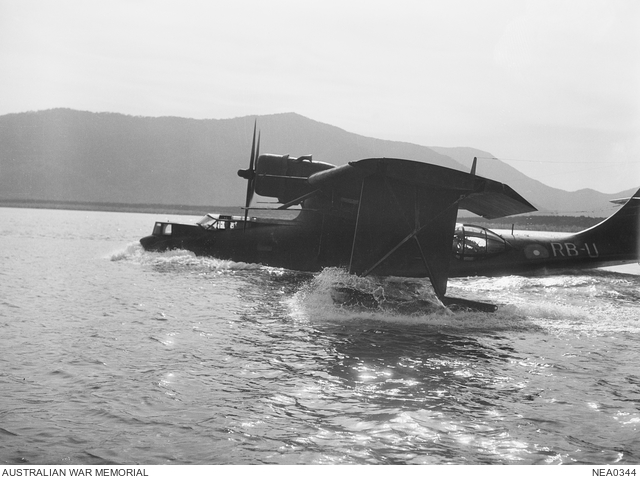 Despite not gaining the appreciation of the crews of more glamourous aircraft such as the Boeing B-17 Flying Fortress or the Curtiss P-40 Warhawk (Kittyhawk), Catalinas were much-loved by their crews. The poem ‘The Cat that comes around’ (MSS1299; C296519) highlights this affection:

There are Cats that do the milk run every blooming night

Oh the Cat boats get the work, the B17s the pay,

And the Cats start off on the milk run every day.

Perhaps the most important duty of the Catalina in the minds of Australians at home was their role in the repatriation of and provision of medical supplies to Australian prisoners of war. Many of No 76 Wing’s Catalinas transported Australians from Japanese prison camps. For many of these men, the Catalinas represented hope and a first step in the long journey home. 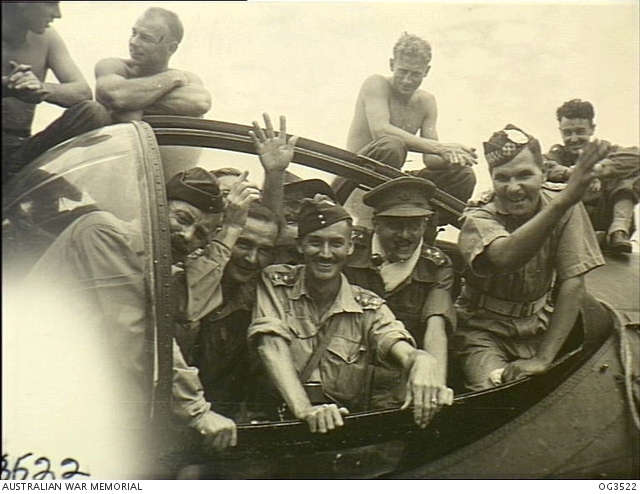 Lacking the glamour of other aircraft from the Second World War, Catalinas are an often overlooked aircraft in Australia’s history. From long-range missions and bombing enemy targets, to reconnaissance and mine-laying, not to mention the ability to land on both land and water, the Catalina was a versatile aircraft. The role played by Catalinas in Australia’s Second World War effort in the Pacific cannot be ignored.