This week the Research Centre received a call from a fan of Sandy, Major General Sir William Throsby Bridges' favourite charger.  November this year sees the 90th anniversary of Sandy's return to Australia, after a tour of duty which included the coast of Gallipoli, Egypt and France.  Sandy's fan wished to confirm the information the Research Centre has about this much-loved animal in preparation for a ceremony to mark the anniversary.

Although General Bridges had the use of three horses, Sandy was believed to be his favourite.  This impressive portrait in the Memorial's photographs collection clearly acknowledges the General's feelings, as he allows his charger's head to obscure his own! 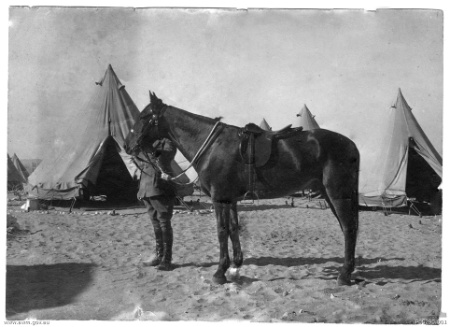 General Bridges died in May 1915 from a wound sustained at Gallipoli and Sandy, who was presumed to be offshore at the time, was eventually shipped back to Egypt.  Nearly a year later he was transported to France.

In October 1917, the Minister for Defence, Senator George Pearce, called for Sandy to be returned to Australia.  Copies of the ensuing letters, cables, minutes and memos between the organising parties comprise an official record held in the Memorial archives.  This record AWM13 7026/2/31 can be viewed in the Memorial's Research Centre Reading Room.

Sandy sailed from Liverpool in September 1918, arriving in Melbourne in November.  As the official record says, he was "pensioned off", or turned out to graze at the Central Remount Depot in Maribyrnong.  Blind and unwell, Sandy was put down in 1923.

Sandy's claim to fame is not just as the favourite horse of General Bridges, but that, of 136,000 Australian horses sent away to the First World War, Sandy was the sole horse brought back.