Experiences of a Prisoner of War in Turkey : the Captain White story

In preparation for the upcoming 100 year anniversaries of the First World War, curatorial sections at the Memorial have begun concentrated cataloguing projects for objects relating to the Great War.

Having taken a particular interest in the Australian Flying Corps after working on the Memorial's First World War aircraft exhibition - Over the front: the Great War in the air I took great pleasure in researching the war time story of Captain T W White DFC, MID* and his daring escape from a Turklish prisoner of war camp in 1918.

White was born in Hotham, Victoria on 26 April 1888 and at an early age developed an interest in aviation. On 1 August 1914 he was selected for the Australian Flying Corps' first training course at the Central Flying School, Point Cook where he qualified as a pilot the following year. 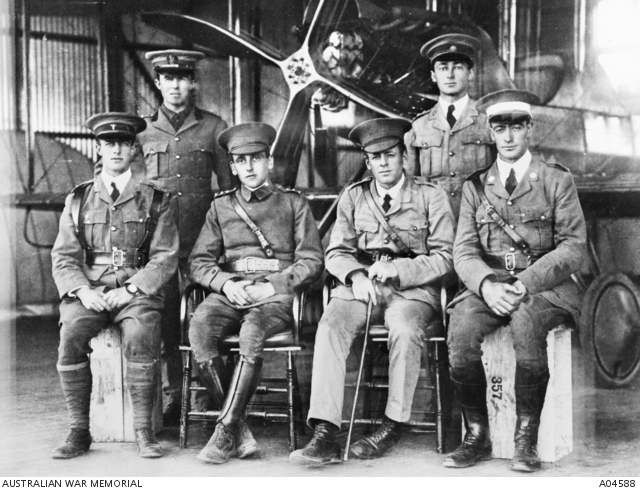 Group portrait of instructors and pupils from the first flying training course at the Central Flying School Point Cook. White is standing in the back row; second from the left.   C38073

Early in February 1915, the Indian Government requested the support of an Australian air force unit for the Indian Army's campaign in Mesopotamia. Forty five men, including White, were selected and the group was named the Mesopotamia Half Flight.

On 1 April White was promoted captain and adjutant of the Half Flight. The unit embarked for India on 20 April and after reaching Bombay were transferred to Basra (now part of present day Iraq).

On 13 November 1915 White and Captain Francis Yeats-Brown, 17th Indian Cavalry were taken prisoners of war. The following extract is from the official statement made by White on 31 December 1918 to the Administrative Headquarters, AIF describing what happened that day in the lead up to their capture: (The text remains as written.)

On 12th November, whilst at AZIZIEH, the, divisional Commander, Major General TOWNSHEND, ordered that the Telegraph lines in rear of the Turkish positions before BAGDAD be destroyed by Aeroplane, which was to land behind the enemy's lines. Volunteers were asked for by the Flight Commander, and, with Captain F. YEATS-BROWN. 17th Indian Cavalry, (who was my observer), I volunteered for this task. I was flying a MAURICE-FARMAN Longhorn Aeroplane with a 70 h.p. Renault engine. Owing to the distance to be covered i had to carry tins of petrol and oil to fill up my tanks after landing for the return journey. 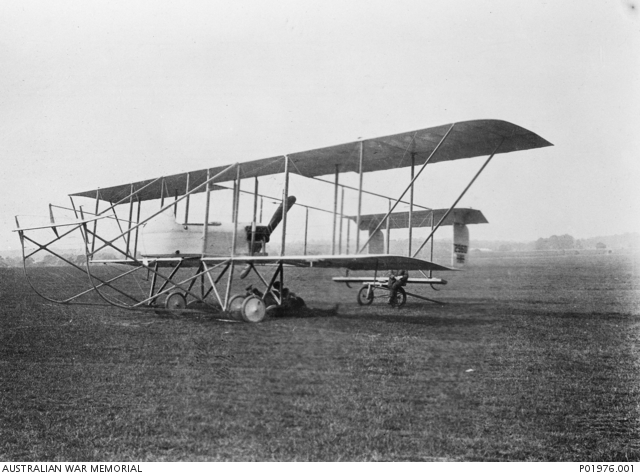 Port side view of a Maurice Farman Longhorn, similar to the aircraft flown by Captain White. C283550

I left on 13th November 1915 and found that the telegraph lines ran along the main road from FELUDJAH to BAGDAD and not at some distance from it, as shewn in the Official maps. For this reason I had great difficulty in finding a place to land owing to the large number of Turkish troops of all arms that were marching along the road. I landed on a small patch of ground bounded by canals where the line was about 200 yards from the road, and where there appeared to be only Arabs and no regular troops about, but through trying to land as close as possible to the wires, and owing to the smallness of the patch of ground, I struck a telegraph pole after landing and broke the longeron and ribs of my lower left plane. Some Arabs opened fire from about 200 yards immediately I had landed and a cavalry man, whom I had passed over in landing, rode off for assistance to what we had mistaken for a deserted building, but was really a gendarmerie barracks. I filled my tanks and kept off the Arabs and Gendarmerie with the rifle which we carried in the aeroplane, while Capt-Yeats-Brown blew up the telegraph wires with guncotton. But the enemy had cover and were able to advance on us along the canal, and I was unable, not having a machine gun, to keep them off long enough to attempt temporary repairs, and though we started the engine, the aeroplane became entangled in the broken telegraph wires and we were quickly taken prisoners, although Capt. YEATS-BROWN attempted to taxi away at the last moment.

The Arabs struck White and Yeats-Brown with their rifle butts and because White had particularly exasperated them by shooting the rifle, struck him several times on the head. One blow delivered with an adze, left a particularly bad wound. Both prisoners were then taken to Baghdad where after three weeks in hospital, including a week's solitary confinement for White, they were sent to Mosul. White was imprisoned at Mosul for two and a half months before being sent to Afion Kara Hissar the principal concentration camp of Australian prisoners of war in Turkey. He was imprisoned there for two years and three months. 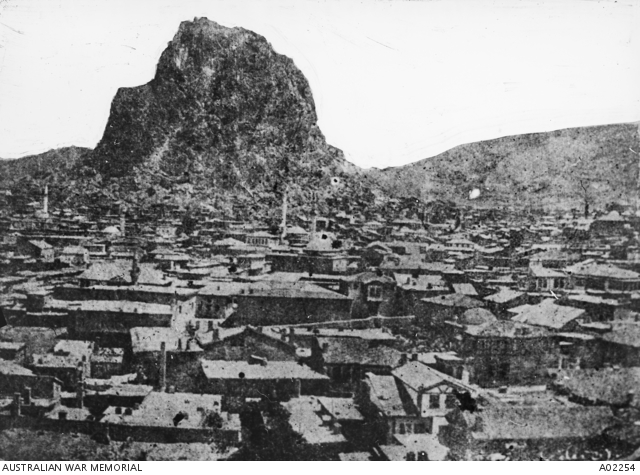 On 26 July 1918, owing to an enquiry about his health, White was transferred to a hospital in Constantinople. After being discharged, he arranged to escape with Captain Alan Bott from the Royal Air Force. The following descriptions from White's official statement explains what happened next:

I succeeded in escaping from my guard during a railway collision on a viaduct at KUM KAPU, near Constantinople. I gained a start on the soldier who followed me, by jumping from a buttress of the viaduct into the street, and after a long chase through the streets, I escaped from him by running into a house, where the tenants proved to be Greeks. From them i bought a Turkish Fez and coat and went by tram to GALATA in search of a Russian, who promised to find me a hiding place. I did not find him till the second day, spending the interval in trips on the Bosphorus and in cafes and various places of amusements. Finding the man i wanted in a German beer garden and knowing him because he carried a cigarette behind his right ear (pre-arranged signal) I followed him to a deserted carpenter's shop in a back street in GALATA. A Turkish Officer lived upstairs, and his orderly lived on the other side of the partition of the room in which i was hiding. For this reason I had to make no more noise than was made by the numerous rats which infested the place, and I could not wear my boots. Captain Bott joined me at this place on the second day. He had succeeded in giving his guard the slip whilst waiting for a boat at GALATA bridge. 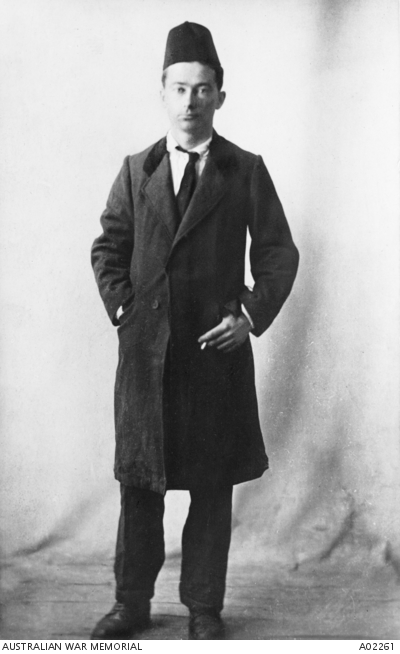 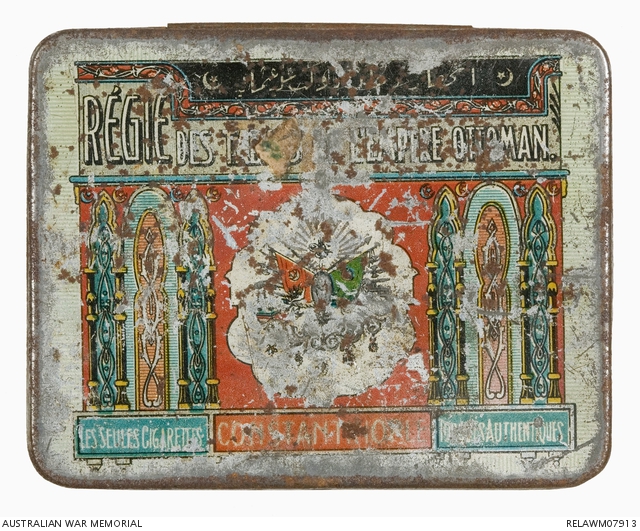 Turkish tobacco tin given to White as a parting gift by the Greeks who outfitted him in Turkish dress. C117569

I remained in this hiding place for six days, when, being discovered by a Turk who climbed up to the window, we left and went aboard the Ukranian steamer. "Batoum" which was anchored in the port. Unknown to the captain we were concealed by the ship's engineers.

For various reasons the ship did not sail for a further 33 days, during which time we had to remain below, at times having to be hidden from the Turkish police in small ballast tanks below the propeller shaft tunnel. The tanks were so small that we were unable to sit up, whilst the air was always foul. Through lying for long periods in these tanks, which admitted no light and contained a certain quantity a water and mud, and through lack of exercise, we became very weak and emaciated.

I had twice to leave the ship to visit Constantinople regarding the obtaining of money with which to bribe the Russians. On one occasion I visited Mr. J Sykes, an English civilian, who cashed some cheques for us, whilst he was at the office of the Prisoners of War Bureau, without my identity being discovered by the Turkish Officials there.

On October 6th. 1918., we reached ODESSA, after a three days trip. The journey was longer than usual, as the firemen, (some of whom were BOLSHEVIKI) were frequently drunk and their work had to be done by the engineers.

During our stay in ODESSA we collected what information we could regarding the Austrian and German Troops, (who were in occupation of the town) and of the BOLSHEVIKI. 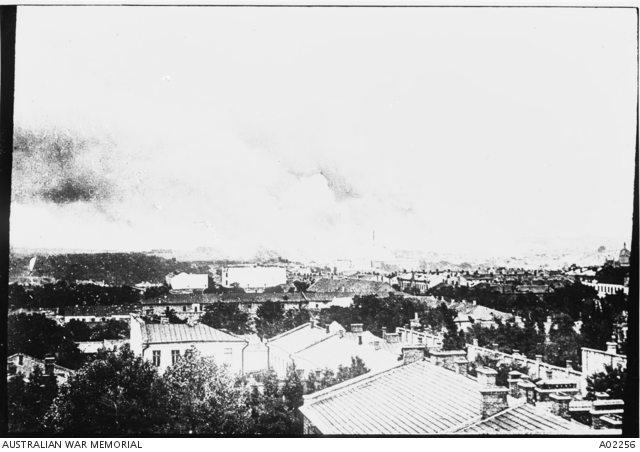 The city of Odessa. A huge Austro-German ammunition dump has recently exploded. C1004305 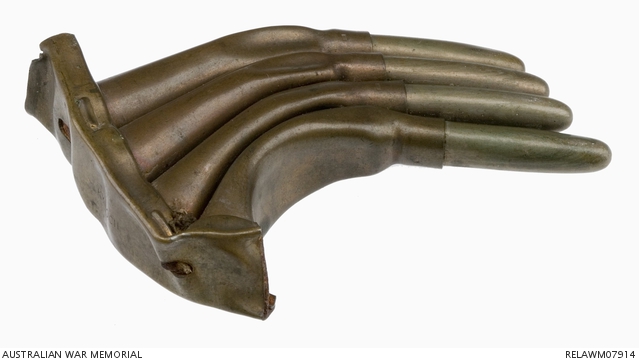 As we managed to obtained false Russian passports and as Capt. BOTT spoke German and I knew sufficient Russian (which I had studied in Turkey) we managed to evade suspicion. We spent most of our nights in ODESSA at the house of a Ukranian officer, who lived in the BOLSHEVIKI quarter, and who was glad to have two people staying with him who owned revolvers. For, owing to the BOLSHEVIKI, any civilians who carried arms could be shot by the police.

On the night of November 3rd., by arrangement with a Russian Captain of the Mercantile Marine, we went aboard the Ukranian steamer "Euphrates", which was bound for VARNA to pick up released Ukranian prisoners. We remained concealed till the ship had left ODESSA and on arrival in VARNA with the assistance of a French Officer, who boarded the ship there, we evaded an unnecessary 4 days quarantine.

At Varna we met Brigadier-Gen. ROSS, who arranged that we should go by train to SOFIA. From sofia we came by motor car SALONIKA, reaching there on the evening of November 10. We remained in Salonika for about 2 weeks, during which time we managed to obtain uniforms. We were then sent to CAIRO via Port Said.

White and Bott arrived at Port Said on 25 November 1918, with White arriving in England on 21 December.  He was gazetted a Distinguished Flying Cross on 3 June 1919 'In recognition of distinguished service rendered during the war' and was Mentioned in Despatches on 16 December 'for valuable services whilst in captivity'. White had previously been  Mentioned in the Despatches of General Sir John Nixon on 17 January 1916.

Returning to Australia via America aboard the SS Ventura, White disembarked in Sydney on 5 January 1920. His appointment in the Australian Imperial Force was terminated the following day. 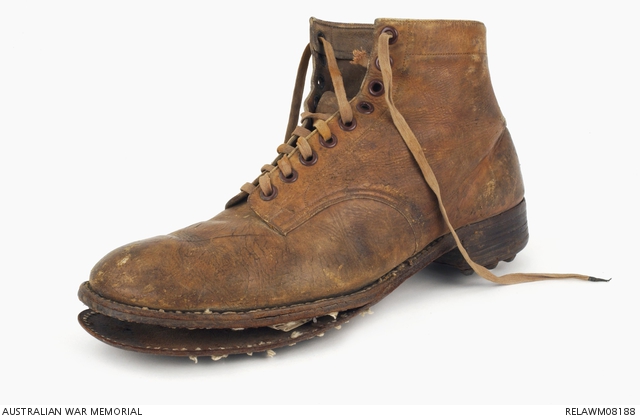 During his period of incarceration, Captain White kept a diary of his experiences. To keep it safe he concealed it in the sole of this boot. He subsequently published an account of his experience based on the diary, titled 'Guests of the Unspeakable'. C118483