Mettle and Steel: the AANS in Salonika.

Thanks to increased interest in the experiences of the Australian Army Nursing Service (AANS) during the First World War, I recently attempted to redress the lack of focus on the nursing outpost of India. It would be a great shame to then omit the service of our girls in Salonika, who likewise faced extreme difficulties with remarkable courage and professionalism. Such hardships would eventually come to mark this theatre of war as one of the most difficult for the AANS.

Salonika (also known as Salonica, Thessaloniki or Thessalonica) in Greece was a sideshow to the Western Front, but was nevertheless an important campaign to regain control of the Balkans and to prevent enemy forces from gaining control of areas leading to the Suez Canal and the Middle East. It wasn’t until September 1918 that the stalemate was broken, when the Bulgarian army, which was an ally of Germany, was forced to capitulate. Salonika was a major base in this operation.

Following the invasion of Serbia by Austro German forces and the Bulgarian Army in October 1915, Anglo French forces were dispatched north from the Greek port of Salonika to assist the beleaguered Serbian Army. A number of British and Canadian hospitals were then established in Salonika in 1916. Although there were no Australian soldiers fighting on this front, Australian nurses were sent to relieve the British, French and Canadian nurses and to provide nursing care to British soldiers and Bulgarian Prisoners of War. As Australian nurses were present in a theatre of war where they could not nurse the Australian soldiers they so desired to, they were inherently disappointed. Nursing ‘our boys’ was a major motivation for overseas service. 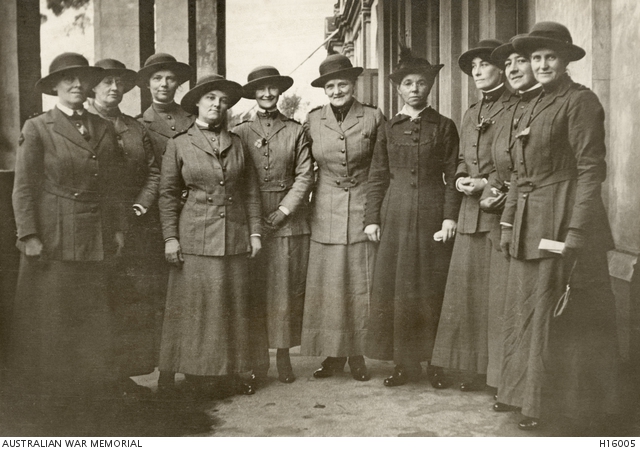 In April 1917 an urgent request from the British Director General of Medical Services called for four contingents of AANS nurses to be dispatched to Salonika to increase the hospital services there. German submarines presented a constant threat in the Mediterranean and it was deemed safer to send Australian nurses via Egypt than from England, as the route was more dangerous.  Each unit was allocated one Matron, ten AANS Sisters and eighty Staff Nurses. RMS Mooltan left Sydney in June 1917 with 215 nurses and was followed by HMAT Wiltshire in August, carrying another 52. These units contained AANS personnel from all states; however the first contingent consisted mainly of nurses from the 3rd Military District (Victoria) led by Principal Matron Jessie McHardie White. She was directly responsible for the care of these nurses, as well as the overall welfare and administrative control of all nurses in Salonika. The second contingent was mainly from the 2nd Military District (New South Wales), led by Matron Beryl Campbell. The third contingent was a composite of the remaining states and was led by Matron Ethelda Runnalls Uren from 4th Military District (South Australia). In 1918 Matron Uren returned to Australia and was replaced by Matron Christense Sorensen. The fourth contingent consisted of 61 nurses and was led by Matron Jessie Ross Gemmell.  It left Australia later and arrived in Egypt on 6 October 1917 as General Allenby’s big offensive was beginning in the Sinai Peninsula.  On orders of the Director of Medical Services, Egyptian Expeditionary Force, they were distributed to various British and Australian hospitals in Egypt. After the successful outcome of the campaign the nurses were sent to Salonika and arrived there in August 1918. 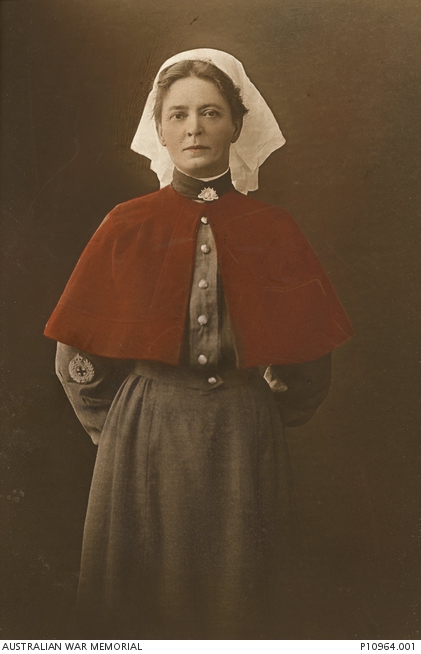 The nurses were stationed at several hospitals during the Balkan campaign. The first contingent took over No. 66 British Hospital, a tent hospital at Hortiach, about 20 kilometres from the city, high in the hills towards Bulgaria. However they moved down to No. 52 British General Hospital (BGH) at Kalamaria in about November 1917.  The second contingent took over No. 50 BGH, a hut hospital at Kalamaria. The third took over No.60 BGH at Hortiach. These nurses moved several times, spending summers at Hortiach and winters close to the coast at Lembet. The fourth took over No. 42 BGH, a tent hospital at Kalamaria, and later moved with it to Uchanta. For the duration of the campaign each contingent battled adverse conditions to ensure not just the welfare of their patients, but their own as well. AANS nurses suffered from deprivations and hardships, yet they proved their mettle and contributed to a legacy of military nursing of which we can only be proud.

To understand the privations and challenges that underscored their Salonika experiences we can look to papers kept by the nurses themselves. Matron McHardie White described the difficulties of obtaining fresh food and how the sisters drew rations just as the soldiers did (though they did not use their rum ration!) Once a week they had iron rations, that is bully beef and biscuits. At other times the ‘home sister’ allocated to each hospital for the purposes of attempting to obtain fresh vegetables, eggs or milk would be successful. Matron McHardie White mentions that once the nurses were settled on the ground, their Red Cross supplies began to arrive and were of immense value. However, the water always remained of poor quality and had to be chlorinated.

Matron McHardie White also painted a graphic picture of the climatic conditions in which the nurses found themselves, “the winter was exceedingly severe; the wind known as the Vardar wind, being almost a blizzard. There were heavy falls of snow, and very low temperatures at night”. The extreme temperatures caused drugs, ink and hot water bottles to regularly freeze in the morning. Wintery conditions were a danger to the nurses as some fainted, while others were affected with carbon monoxide poisoning as fuel was almost impossible to obtain and the only means of heating came from charcoal burnt in braziers.  Staff Nurse Lucy May Pitman wrote of the challenges of her first autumn and winter in Salonika when she was working at No. 60 BGH at Hortiach:

[21 October] Lanterns blowing out & leaving you in dark…

[2 November] Imagine me [on night duty] over my ankles in mud, dragging one foot out then other foot & standing on one leg in grim peril or sitting down hastily…feeling the rain oozing through my mack. This is the life?

Despite the harsh winters, there was little respite in the warmer months as the heat of the summers was as intense as the cold of the winters. As in India, permission was granted for nurses to wear white uniforms. Due to the scarcity of suitable material this led to improvised uniforms using white aprons and used sheets. The heat also contributed to the malaria which dominated the difficult summer months. The many ravines and streams in the area made ideal breeding grounds for mosquitos and Matron McHardie White later reported that ‘most of the nurses were affected by it [malaria] one time or another…’ By August 1918 45 nurses had been sent back to Australia from Salonika and another 14 were waiting to go, mostly on grounds of ill health. 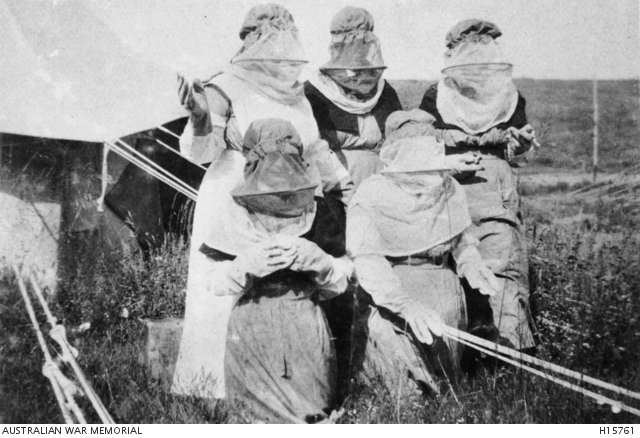 Owing to the extremes in weather and the location of the hospitals near mosquito infested ravines, modification of the AANS uniform was a necessity.  The style of uniform worn during the First World War changed according to the conditions the nurses found themselves in and Salonika was no exception. As illustrated by the mosquito net worn by Matron Uren, malaria precautions were vaguely comical. A narrative from Lucy Tydvil Armstrong in the papers of medical historian Arthur Graham Butler, vividly recalls these precautions:

In the malaria season we were supposed to wear viels [sic], long gloves & putties, which made it quite impossible to carry out our duties, when men were rigoring and vomiting all night long, we just had to do away with the precautions, & run the risk of being bitten with mosquitos.

A ‘mosquito proof’ nurse would be clad in her working dress, huge gloves, rubber boots and thick veil, making it incredibly difficult to move and nurse. Unfortunately this amount of protection still did not do the trick, as suitable leg coverings, such as long boots, were too expensive for the nurses. Although recommendation was made for the boots to be bought for them, it was made shortly before the war ended and came too late. 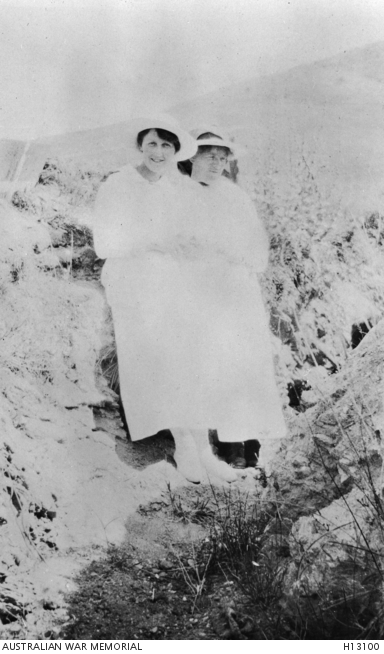 Sisters Gertrude Evelyn Munro and Amy Christie of the AANS. The photograph was probably taken at the 60th British General Hospital, Salonica.

Despite the rigours of the climate, the overall health of the expedition was good. The most serious health problem, which had long-term consequences, was malaria. Fortunately, although many sisters suffered greatly from malaria and dysentery (75 were invalided to Australia) only one was lost from the disease. This was Sister Gertrude Evelyn Munro (Munnie) who died on 10 October 1918 at the age of 36 years. She was buried with full military honours at the British War Cemetery in Salonika. 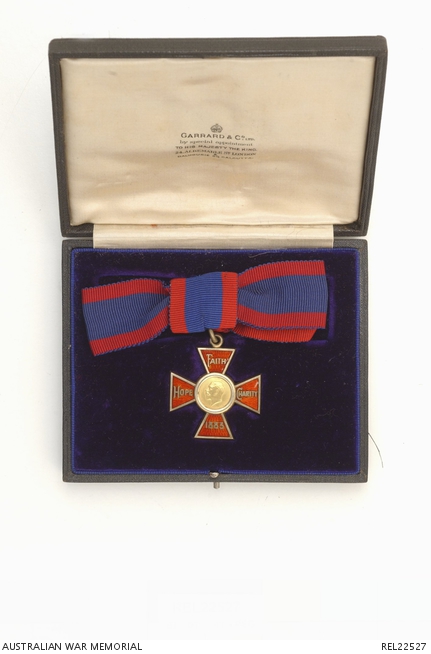 The extraordinary courage and professionalism with which nurses in Salonika faced these challenges was recognised by the high praise lavished on Matron McHardie White and the other matrons, as well as all members of the AANS.  Lieutenant General Milne, the British Army Corps Commander, wrote in a letter to Matron McHardie White, “It has been a great pleasure for me that Australia has been so adequately represented on the nursing staff of the army during the operations.” Matron McHardie White was awarded the Serbian decoration of the Order of St Sava and was made a Member of the British Empire. Matron Uren, who led the third contingent, received the Royal Red Cross (1st Class) and the Order of St. John of Jerusalem for her work at 60 BGH at Hortiach. Matron Christense Sorensen, who took over the management of 60 BGH from Matron Uren in 1918, also received the Royal Red Cross (1st Class). Two other nurses were awarded the Royal Red Cross (2nd Class), eleven were mentioned in despatches and eleven received the Medal of Military Merit awarded by the King of Greece.

Although a request from the British Director General of Medical Services for additional Australian nurses was made in February 1918, it was opposed by Major General Neville Howse, the director of the AIF's medical services. In early September 1918 Howse recommended to AIF headquarters in France that the Australian nurses be withdrawn from Salonika. He argued that the original reason for sending them (the shipping threat in the Mediterranean) no longer applied, they were not nursing AIF soldiers and could be elsewhere, and that many were suffering from ill health. Despite this, the nurses remained in Greece until after the war ended.

One compensation to nursing in Salonika was graphically described by Matron McHardie White, “…in the spring the whole countryside was covered with wild flowers and presented a beautiful appearance. The surrounding energy was fine, Mt Olympus being clearly in view across the bay.” Despite this, I imagine the hardships, which for some included long term health effects, would have been hard to forget.  I doubt the AANS nurses would have been sorry to finally leave Salonika in the first few months of 1919.