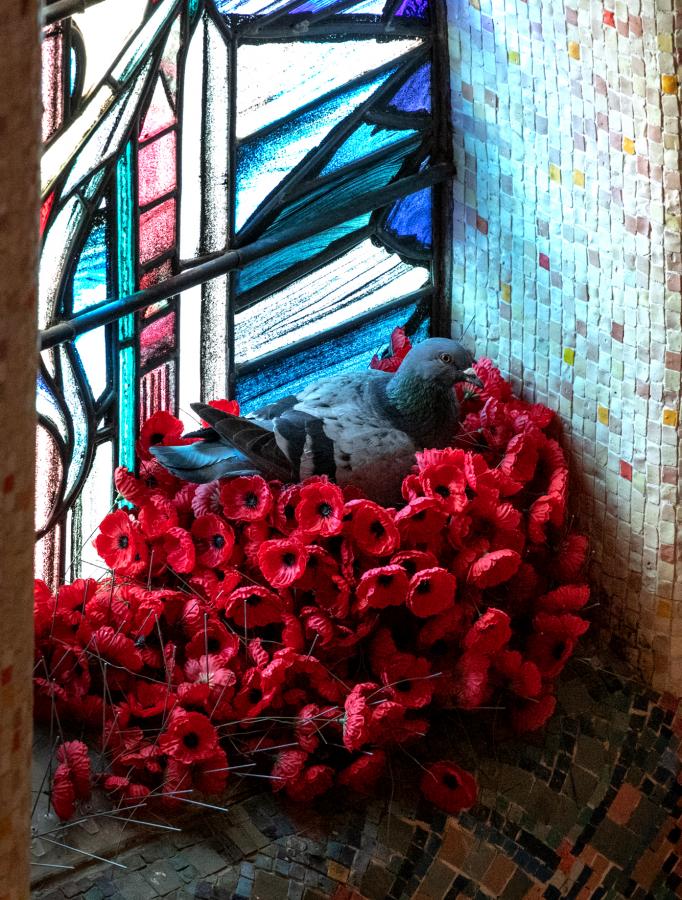 In the peace and quiet of the Hall of Memory at the Australian War Memorial, a pigeon has been busy preparing for new life in a place that commemorates death, sacrifice and renewal.

Each day the pigeon has been flying down to the Tomb of the Unknown Australian Soldier to steal poppies, carefully crafting a nest in the lead-up to Remembrance Day in an alcove above the stained-glass window of a wounded Australian soldier.

The wounded soldier symbolises the defining quality of “endurance”, and the nest of poppies nearby is a poignant reminder of the powerful bond between man and beast on the battlefield. 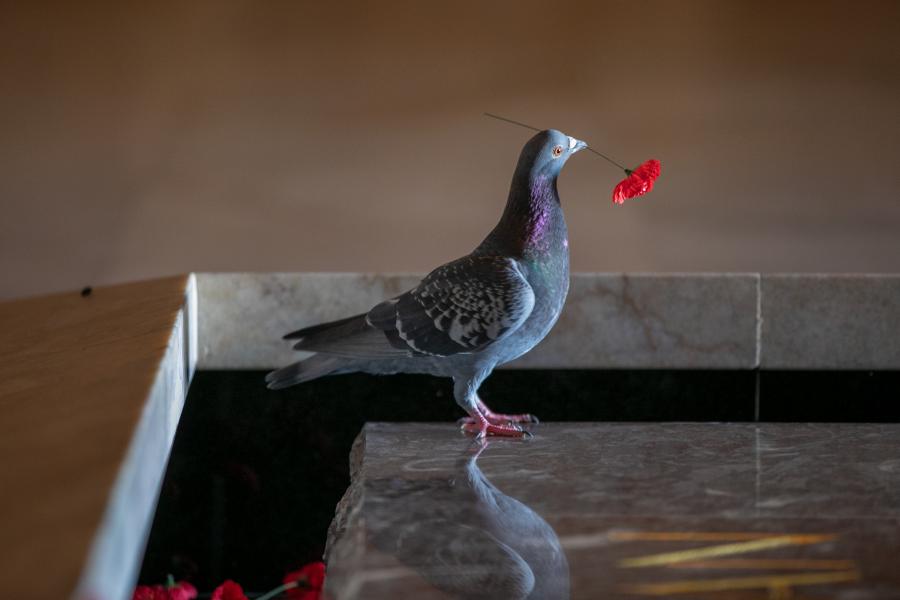 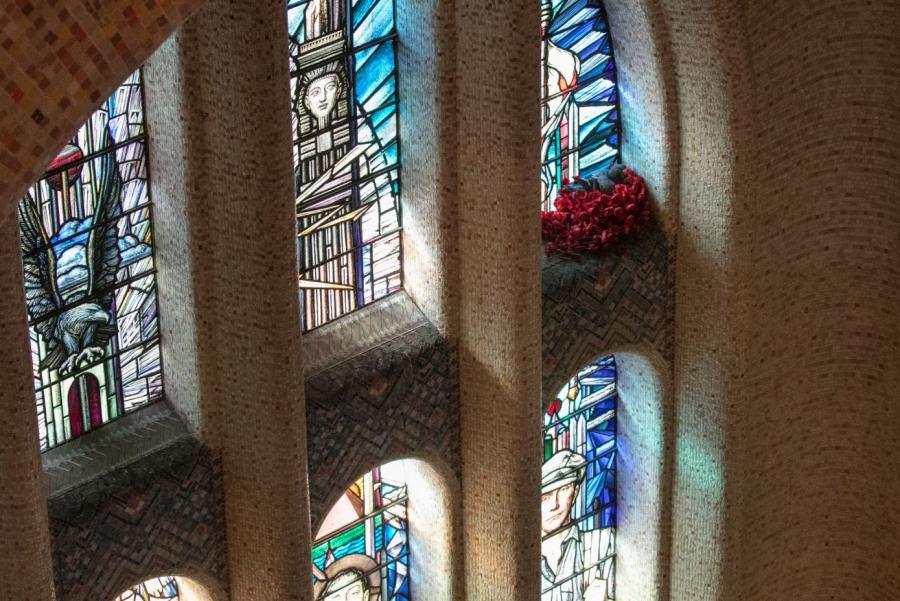 “Pigeons have been in use in both war and civilian life for centuries,” said historian Dr Meleah Hampton.

“Whenever we talk about animals in war, they are fulfilling a purpose or performing a task that people can’t do easily on their own. So we use horses for transporting people or pulling guns, and we use pigeons as an answer to our problems with communication.

“Particularly in the early wars, communication is really difficult. Wireless is in its absolute infancy in the First World War and telephone wires get broken apart in the shellfire on the Western Front. So pigeons are particularly of use in warfare when you’ve got a couple of men trying to get a message from where they are back to the backline; a pigeon can get that through sometimes when nothing else can.” 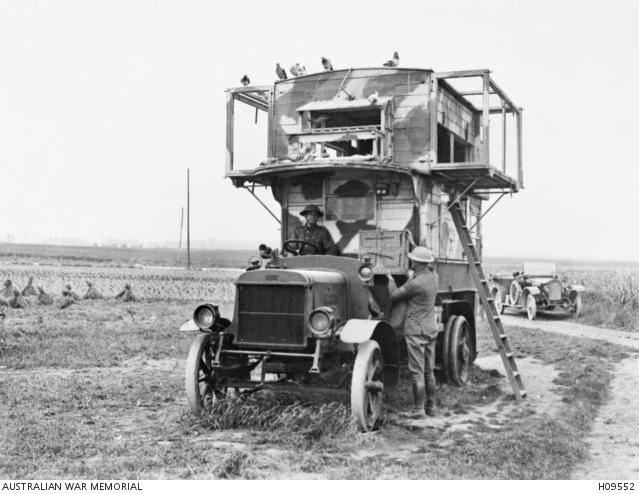 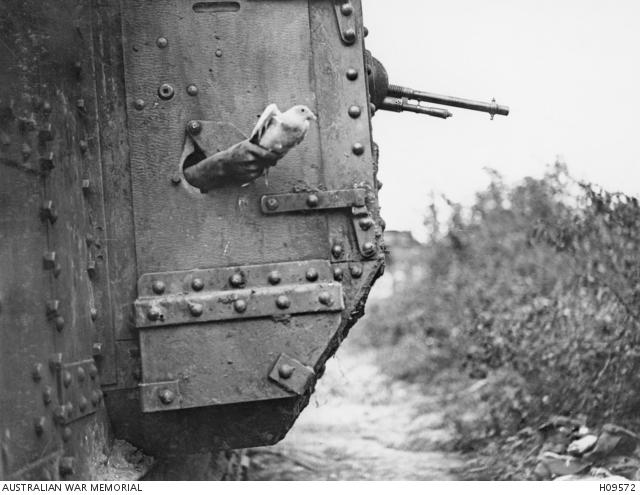 When the Second World War broke out, soldiers turned to pigeons for help once more.

“One of the surprising things about pigeons is how widely they were used in the Second World War,” Dr Hampton said.

“We often think about the Second World War as a time when technology has taken over. We’ve got our trucks instead of horses, and wireless radio, and sophisticated radar signals, and all those sorts of things. But particularly in the Pacific, the mountains and the humidity meant that the wireless radios didn’t work very well, so pigeons were actually the most effective way of getting messages up and over the Owen Stanleys, and throughout the islands.”

The Australian Corps of Signals Pigeon Service was established, and thousands of birds were used to help solve the military’s problems with communication.

“In the early years of the war, Australia decided that we should probably look at creating a pigeon service signals corps, so in 1942 they put the call out to the pigeon fanciers of Australia,” Dr Hampton said. “A lot of men enlisted to become pigeon couriers for the army and pigeon fanciers around Australia donated their birds.” 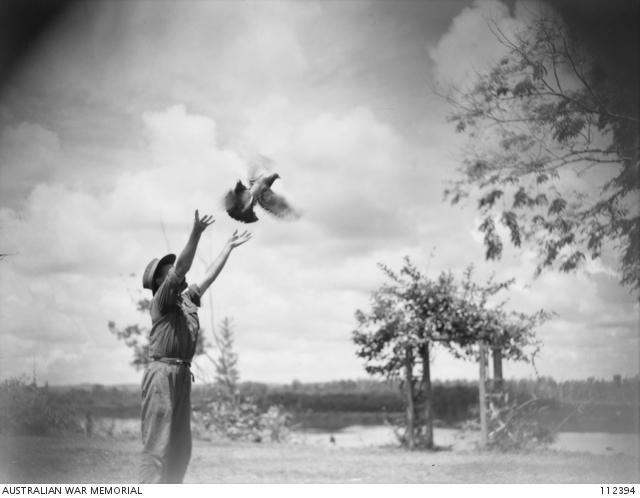 Between 1942 and 1943, pigeon fanciers across the country gave some 13,500 trained pigeons to the army for use for signals purposes.

“That was part of their war effort, to hand over these birds, and they got together as many as they could get,” Dr Hampton said.  “And that civilian effort is, I think, this little magnificent understory of the war.

“They actually become a really effective resource. They become so effective that Australia starts teaching other armies in the area, like the Americans, how we put our pigeon service together – and helping them to put theirs together and expand. It was huge by the end of the war.”

Two Australian pigeons were awarded the Dickin Medal for their actions during the war. The medal, instituted by Maria Dickin, the founder of the People’s Dispensary for Sick Animals in England, is popularly referred to as the Victoria Cross for animals and is awarded to any animal displaying conspicuous gallantry and devotion to duty in wartime. 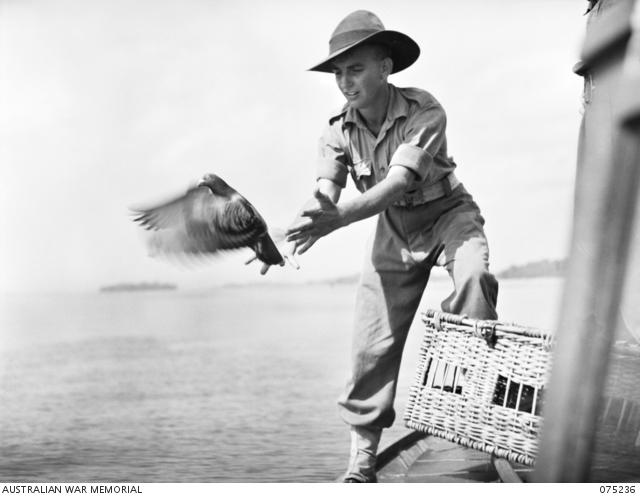 In 1944, the blue chequer pigeon known as DD43 Q879 was sent to help United States forces attempting to recapture Manus Island, north of New Guinea. A small group of soldiers headed off through dense jungle with a radio and a basket of pigeons, including Q879, to investigate reports that enemy troops were preparing for a counter-attack. They confirmed that the reports were correct and that many Japanese soldiers were camped nearby, preparing for a major attack.

As the Americans headed back to their base they were spotted by the Japanese and a fight broke out.  The soldiers needed help, but their radio no longer worked. One after another the pigeons were released, with messages calling for help rolled up in tiny canisters on their legs, but each pigeon was shot down by the Japanese troops. The Americans were surrounded by the enemy and knew that little Q879 was their last chance for rescue.

“The first two pigeons were shot down, but the third got back in remarkably quick time with the message,” Dr Hampton said. “He flew the 48 kilometres back to base in just 47 minutes and the men at the base were able to rescue the forward squadron.” 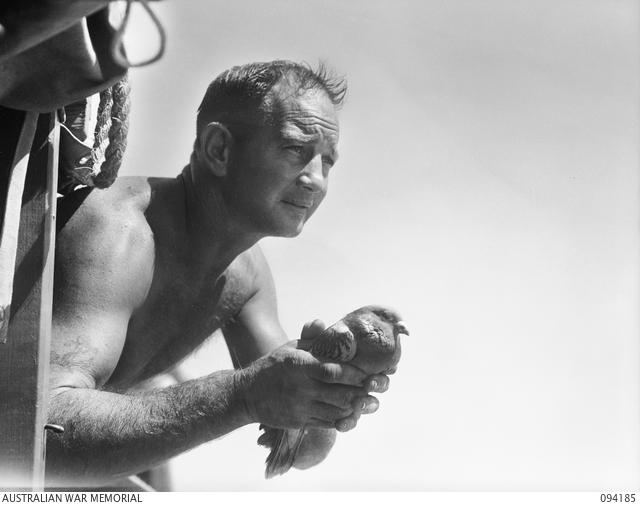 In July 1945, another Australian pigeon – a blue bar cock pigeon known as DD43 T139 – was awarded the Dickin Medal for carrying a message from a foundering boat to Madang, New Guinea, through a severe tropical storm. The pigeon flew 40 miles in 50 minutes and the boat, together with valuable stores, ammunition and equipment, was salvaged as a result and the men saved.

“Nobody really knows if they are just doing what they are trained to do, or if they are truly winged warriors. But they are a tool that we have been able to use to our advantage, and they have been incredibly valuable in wartime.

“If you look at the pigeons from an operational perspective, they’re really important and they fulfil a role that we can’t do. But now we’ve got different problems.

“Before, it was transport and communication; now it’s finding the enemy and identifying their weapons. So we’re still using animals in warfare today, but now we’re using dogs to locate the enemy and to locate improvised explosive devices.

“Eventually perhaps we will be able to do these things without animals, but in the meantime, we still need them, and we still work closely with them.” 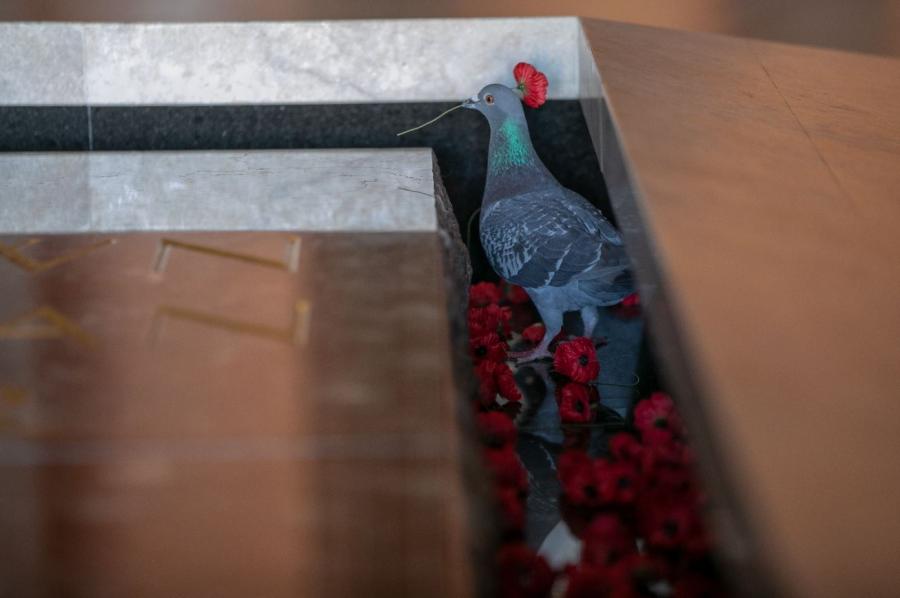 The Memorial will host the Remembrance Day National Ceremony on 11 November 2019. For more information, visit here.

Monday 24 February 2020 is National War Animals Day. A range of activities will be held at the Memorial on Sunday 23 February 2020.