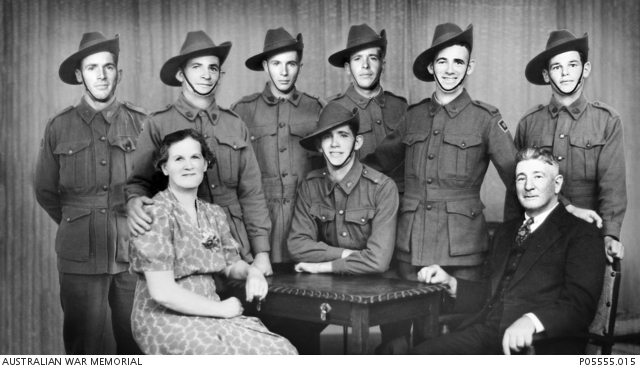 In a war that left tens of thousands of Australian families in mourning, the Hutchins family suffered more than most.

Mary Hutchins and her husband Henry saw seven of their nine sons off to war; only three came home.

The seven Hutchins brothers – Malcolm, William, David, Ivan, Alan, Fred and Eric – were aged between 17 and 30 and were working as labourers in their local community at Woorinen, near Swan Hill, Victoria, when they enlisted during the Second World War.

Four of the brothers – David, Alan, Fred and Eric – went on to serve in the ill-fated Gull and Lark Forces in Ambon and Rabaul.

Although some Australians managed to escape the overwhelming Japanese invasion forces, little was known at first about what had happened to the Hutchins brothers or the remainder of Gull and Lark Forces.

The Hutchins family heard anecdotally from one of the successful Rabaul escapees that Alan might have been shot and killed while trying to escape the advancing Japanese. 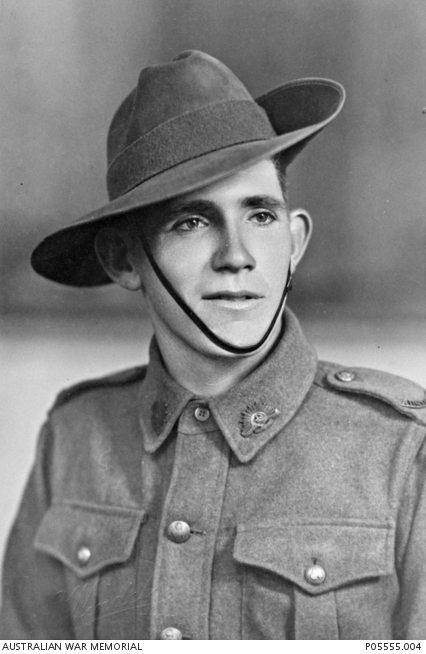 But by the end of 1945, there was still no definite word about what had happened to Alan and his three brothers.

One confirmed that Alan had been killed during the hostilities at Rabaul in March 1942. The other three: that Eric had been executed at Laha in February 1942; and that Fred and his brother David had died as prisoners of war of the Japanese in July 1945, just weeks before the end of the war.

Alan had been one of the first of the Hutchins brothers to sign up during the war. 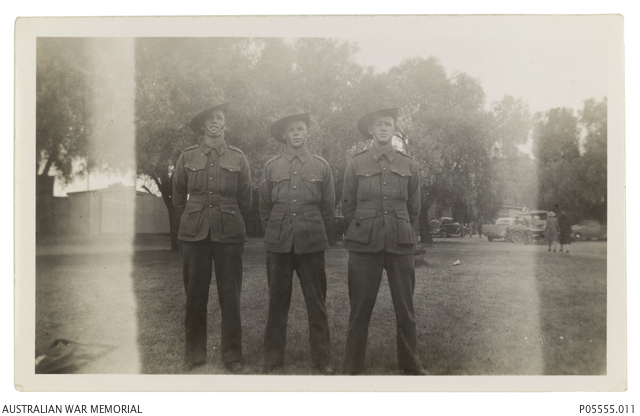 Alan, Ivan and Bill at the Swan Hill railway station, prior to leaving for service.

The older three went on to serve in the Middle East and New Guinea, but Alan went on to serve with the 2/22nd Battalion and was sent to Rabaul in April 1941 as part of the ill-equipped Lark Force.

When 5,000 Japanese troops landed as part of an invasion force in January 1942, the 1,400-strong Lark Force was heavily outnumbered, and was quickly overwhelmed. Within hours of the invasion, the Lark Force commander, Colonel John Scanlan, ordered a withdrawal, declaring it was “every man for himself”. Chaos ensued and Lark Force disintegrated. Twenty-four-year-old Alan was killed while trying to escape the advancing Japanese. His body was never recovered. 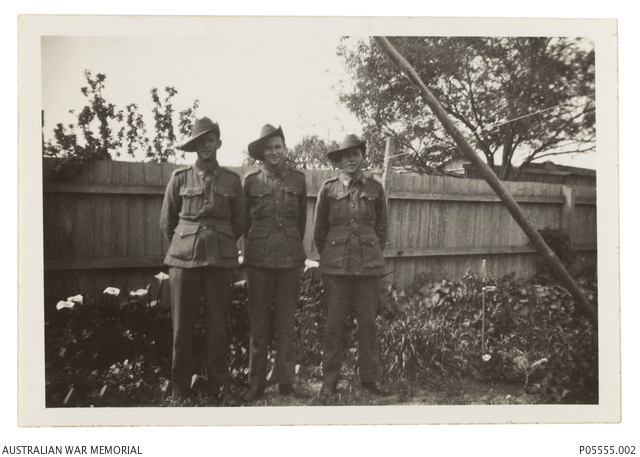 David, Eric and Fred in the yard of the family home at Woorinen North.

His brothers David, Fred and Eric had enlisted together six months earlier in August 1941. The two youngest, Fred and Eric, had put their ages up from 18 and 17 to 20 and 19. Their older brother, David, who was 28, and married with two children, with another on the way, joined up to look after his two younger brothers.

The three brothers went on to serve with the 2/21st Battalion and were sent to Ambon in December 1941 as part of the newly-formed Gull Force. Ill-equipped and heavily outnumbered, they too would be overwhelmed by invading Japanese forces in January 1942. 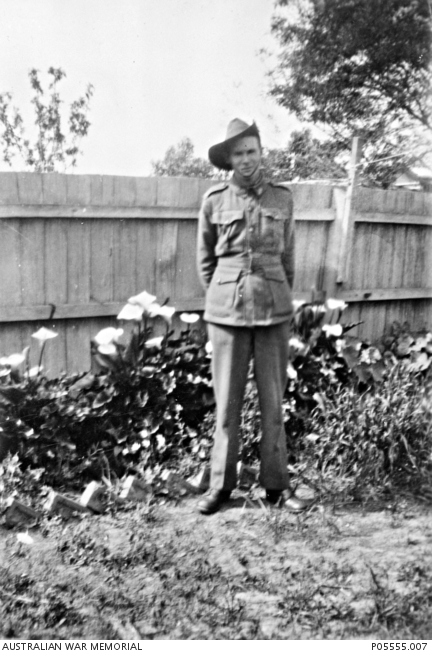 An informal portrait of Eric, taken in the yard of the family home.

Eric, aged 18, was among almost 300 Australians who were massacred around the Laha Airfield on 2 February.

The remainder of the battalion surrendered on 3 February, and were imprisoned at their former barracks on Tan Tui. Conditions for the prisoners on Ambon were harsh and they suffered the highest death rate of any Australian prisoners of war: three-quarters died during their captivity due to mistreatment, malnutrition and disease.

After surviving more than three years in captivity, Fred was beaten unconscious by a guard. He died, aged 22, on 6 July 1945. His brother David died, just a few weeks later, on 29 July 1945, at the age of 32, reportedly from beriberi. Within weeks Japan surrendered. 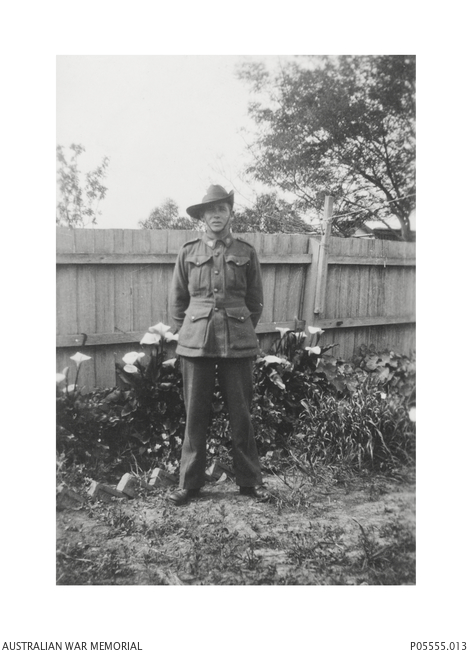 An informal portrait of Fred in the yard of the family home. 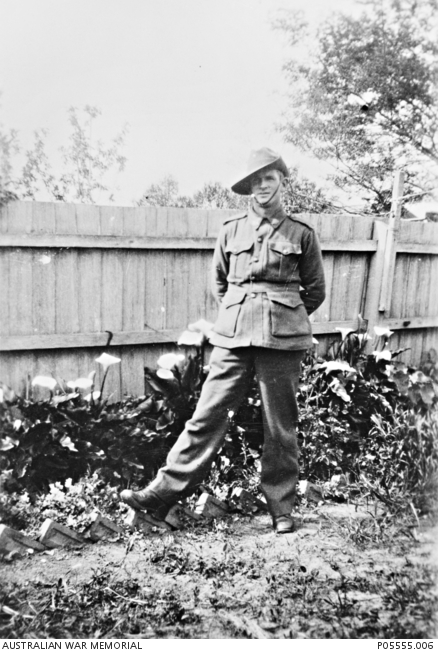 David enlisted to look after his two younger brothers.

David would never get to meet his newborn son.  His three children would grow up as orphans. His wife Anne had died of illness at home in Swan Hill in 1944, never knowing what had become of her husband. Their children, Wesley, Lorraine and Trevor, were raised by Anne's brother and his wife. 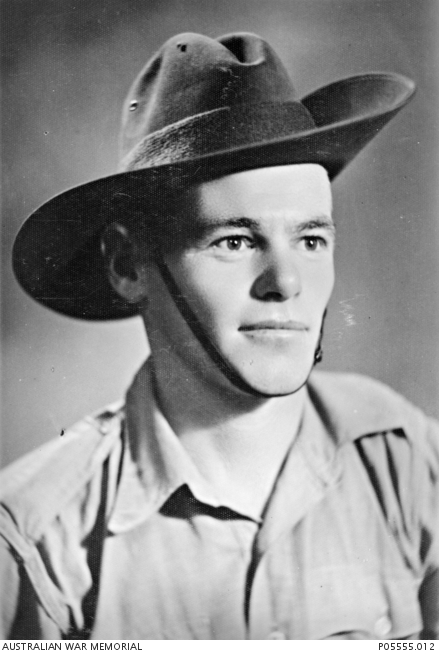 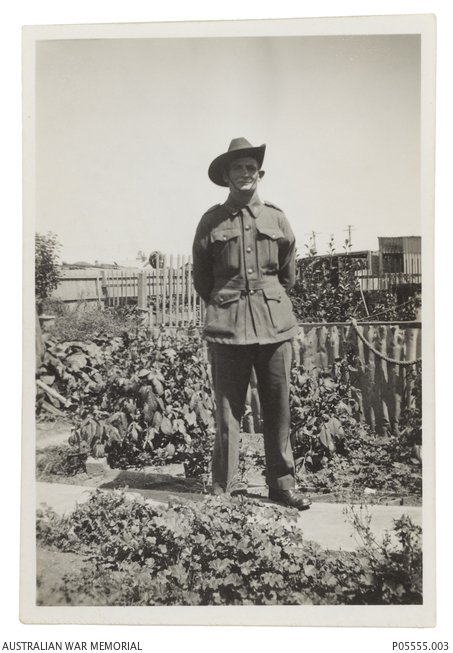 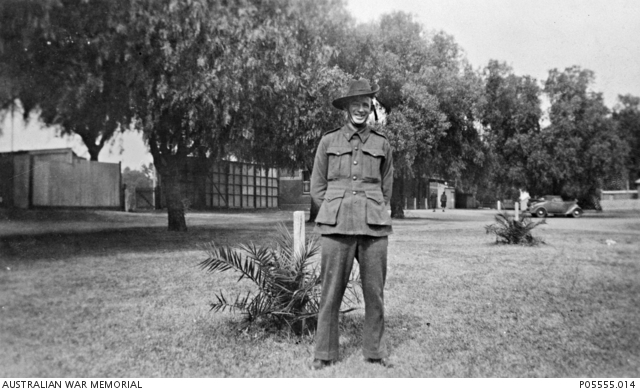 Private William 'Bill' Hutchins at the Swan Hill railway station, prior to leaving for service.

A cousin, Private Thomas Hutchins, who had served with David, Fred and Eric in the 2/21st Battalion, had also died as a prisoner of war at Ambon on 4 September 1945.

Another cousin, Sapper Fredrick Wallace, had served with the 9th Field Company, Royal Australian Engineers, and was a member of the recovery team sent to Ambon in October 1945. There he uncovered mass graves and identified remains, including those of his cousins, at Laha Airfield and the Tan Tui camp. 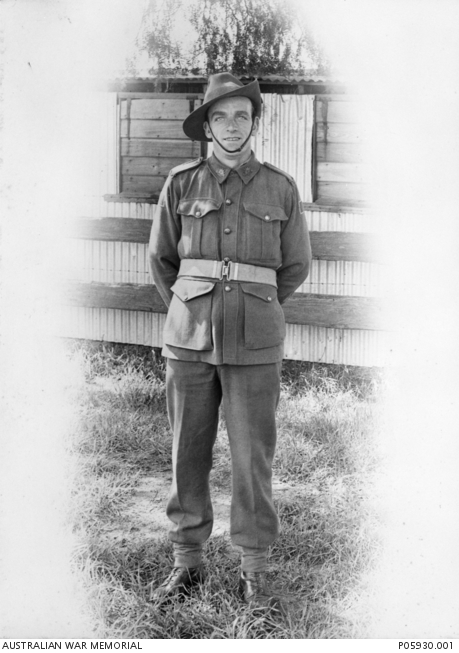 Sapper Fredrick Wallace, a cousin of the Hutchins brothers, was a member of the recovery team sent to Ambon in October 1945. 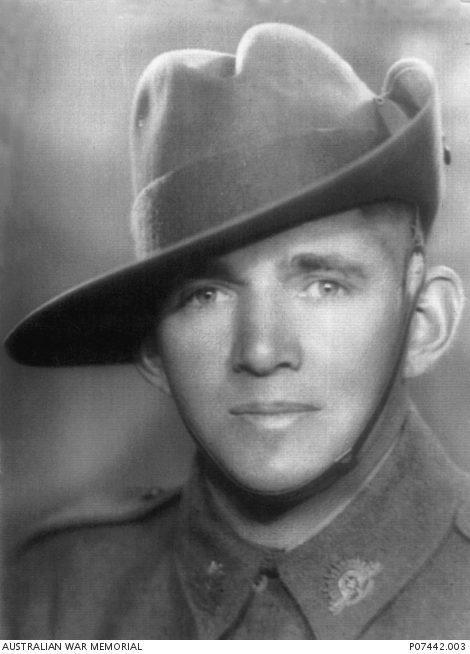 Private Thomas Hutchins, a cousin of the Hutchins brothers, also died at Ambon.

Their mother, Mary Hutchins, wore her Female Relatives Badge for the rest of her life. It was donated to the Australian War Memorial by the Hutchins family along with Mary’s Mothers’ and Widows’ Badge.

Curator Dr Kerry Neale said the badges were a powerful reminder of loss and grief during the Second World War.

“Mary Hutchins saw seven of her sons off to the Second World War, four of whom didn’t return home,” she said.

“They all died as prisoners of war at the hands of the Japanese, but it took years for their deaths to be confirmed and for Mary to learn that those four boys would never return. 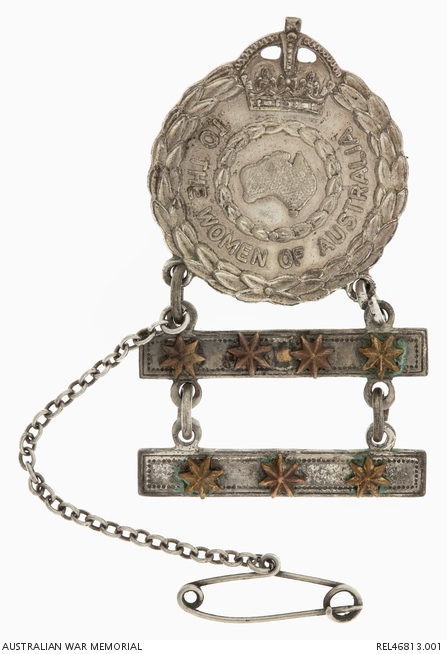 “Her Female Relatives badge has two bars worth of stars underneath it, a single star for each of the seven sons she saw off to war.

“We also have her Mothers’ and Widows’ badge, which has four stars, one for each of her four sons who didn’t make it home.

“Her family told us that Mary never wore her Mothers’ and Widows’ Badge; nor did she speak about the loss of her four sons.

“But she wore her Female Relatives Badge with pride, every day, for the rest of her life, acknowledging all seven sons who served.

“Her Mothers’ and Widows’ Badge was kept hidden away with her grief.” 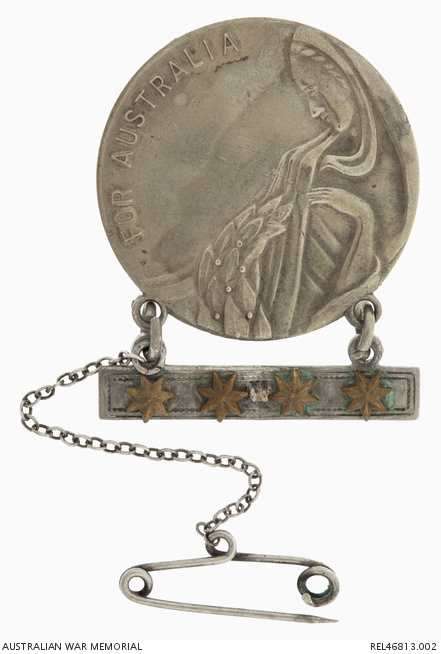 Mothers and Widows Badge belonging to Mrs Mary Hutchins. The four stars represent the four brothers who died during the war.

In December 2007, the two surviving Hutchins sisters – Myrtle Salau, 89, and Mary Coburn, 86 – unveiled a memorial plaque in memory of their brothers at Riverside Gardens, by the Murray River, in Swan Hill.

The sisters had spoken to the Herald Sun newspaper about their brothers' story ahead of Anzac Day.

“We were a big family, a happy family, until the war came," Myrtle said.

“All the boys grew up helping dad around the property ... pruning, picking the grapes.

“We all used to meet at Mum’s on Sunday night for tea. We'd play games, like hide the thimble, then we'd have a sing-along. The boys had beautiful voices.

“I idolised my brothers, they were very close, never a bad word between them.”

Malcolm, known in the family as Mike, wrote his life story in the 1980s: “Sometimes there would be a fight at a dance,” he wrote. “But pick on one of the Hutchins family and you picked on the lot.” 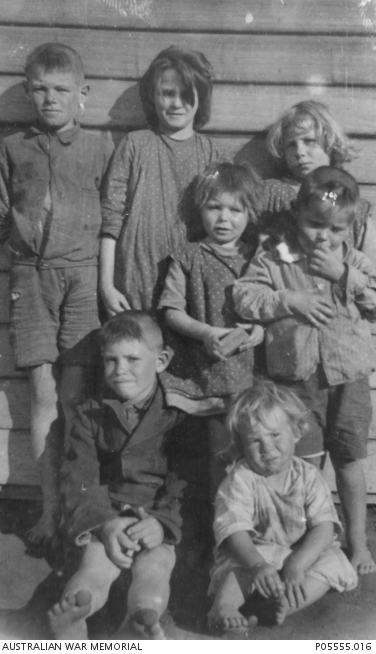 Fred’s twin sister Mary recalled how their mother had not wanted the boys to join up, and that she’d had “hell’s own trouble" with Eric, who had been pestering her to let him enlist after four of his older brothers joined up at Swan Hill.

Myrtle added that the boys “didn't want to be conscripted”.

“I know that much,” she said. “They were glad to fight for their country; all their mates were.”

The surviving brothers carried the scars of war and what had happened to their brothers with them for the rest of their lives.

“I have a letter Fred wrote to me saying they had no arms or ammunition," Malcolm wrote after the war. "They were doing guard duty with wooden guns … My officer told me that I could claim them and have them sent to the Middle East and he would arrange it ... but the Islands fell before they could be shipped out and they were taken prisoners.” 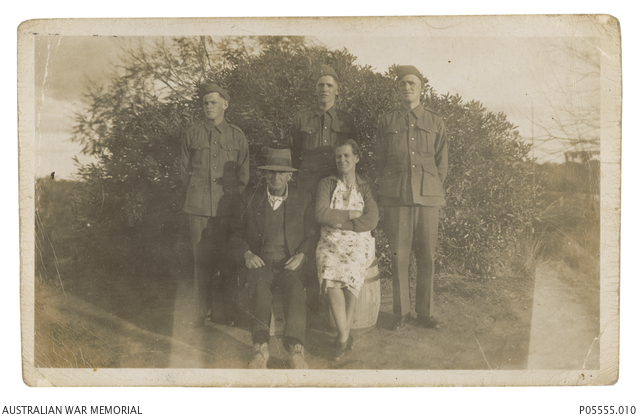 “The whole thing was wrong,” Myrtle said. “They had no hope, no hope at all.”

Nothing was known of Fred or David, except they were prisoners. The Hutchins family, along with thousands of other families, were left waiting, hoping against hope that their boys were alive.

"You never knew from one day to another what would happen, what sort of news you might get,” Myrtle said. “You just hoped for the best.”

On 24 February 1946, Alan’s wife Edna finally received a telegram confirming his death. Myrtle went with her husband Claude and her brothers Ivan and Malcolm to break the news to their parents, who had moved to Campbell’s Creek, near Castlemaine.

"That was shocking,” Myrtle said. “Malcolm did it; he broke the news to mum. It was terrible. I felt so sorry for mum. But when we got back to Woorinen that evening, there was word there to say about the three other boys, all on that one day, so we had to turn around and drive straight back to Campbell’s Creek.” 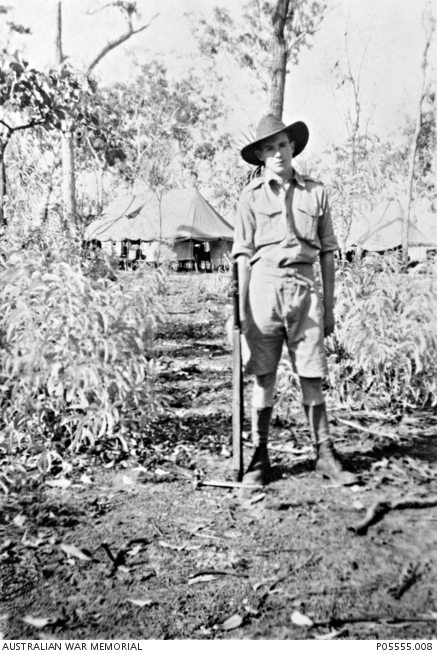 Eric Hutchins, standing at ease with his rifle, at a training camp near Adelaide River.

Myrtle could still remember the local minister at their parents' house after the three telegrams about David, Eric and Fred had been delivered.

Mary said the news almost killed her mother. “I can tell you, I cried and cried for months," she said.

Their parents never spoke of the war again.

“I think there were changes in every one of us, during and after the war." 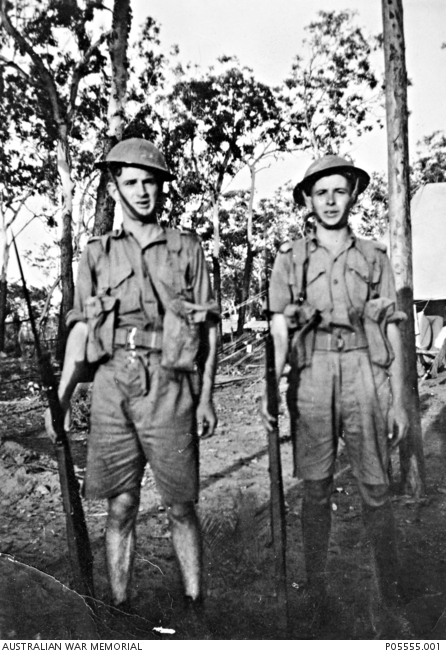 David, left, and his brother, Fred. The brothers are standing at ease with their rifles, at a training camp near Adelaide River.

Myrtle died in 2011, aged 92, the last surviving member of the Hutchins family. She never forgot the loss of her four brothers, and didn’t want to.

“It happened,” she said in 2007. “They're gone. There's nothing we can do. A lot of other families lost boys too, and you've got to stop and think about that. It's war.”

Her sister, Mary Coburn, died in 2008, aged 87. She had told the Herald Sun she still dreamt at night of her twin brother, Fred.

“I still see Fred,” she said. “I dream of him, and what the Japanese did to him.

“I would just like to see him and the boys walk through that door.”