So far from home: sending and receiving mail in the trenches

Imagine if you were unable to contact loved ones by telephone, email or via any other communication strategy now available in today’s digital age. No longer is it possible to hop in your car and drive down the road to visit friends and family. Instead, you have sailed for at least 4 weeks aboard a troopship to a foreign land. And there is no indication as to when, or if, you will see loved ones again.

In January 1915, an oft-repeated subject in the letters and diaries of Australian soldiers who had enlisted in the Australian Imperial Force and were based at Mena Camp in Egypt, was the receipt of letters from back home. A new phenomenon, referred to by Apcar Leslie DeVine on 13 January 1915 as “letter call”, had introduced itself in the training camp. DeVine goes on to mention that this new event literally brought men running to get their letters. The following observation was also made by George McCrae on 9 January 1915 about occasions such as these:

When word is passed around that a mail has arrived the whole camp buzzes with supressed excitement, they are the days to which we look forward but alas they are very irregular, and far between. 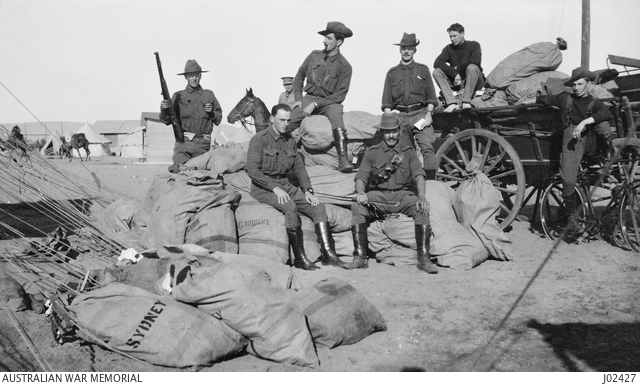 The arrival of the first AIF mail of 161 bags at Mena, Egypt. The non-appearance of this mail in Egypt caused a great deal of talk and anxiety amongst the Australian troops. It had been labelled to GPO London and subsequently returned from there, 13 January 1915.

In some cases, it had taken over two months for the first letters to be received, with the apparent cause, according to Frederick Muir, being that letters had “been to England and back…”. Commenting on the frustration that this delay was causing amongst the men, George Leslie Makin had previously informed his mother in a letter dated 4 January 1915:

I don’t know what the authorities are doing with our letters. There must be tens of thousands of them somewhere. If we do not get a mail very shortly, I am afraid there will be a lot of bad feeling among the men.

Thankfully, the “bad feeling” that Makin feared did not assert itself as mail started to arrive in the camp about two days later. Frederick Tubb, who later went on to receive the Victoria Cross, was one person who recorded with much delight the excitement that that first delivery brought with it. His diary entry of 6 January 1915 exhibits an underlined phrase to emphasise that he had received his first letter from Australia.

Two months later, the arrival of letters was still the cause of much excitement amongst the men with Norman Ellsworth describing the events of “Mail day” in a letter to his mother on 16 March 1915:

…meals are very little cared for on Mail day as everyone in the Mess goes into his corner, lies down, and reads his letters over and over again and the Mess Orderly gets that wild at us not coming to dinner, that he calls us all the names he can lay his tongue to, and it generally ends up by him clearing all the “stuff” away”.

As the war wore on, letters continued to arrive, and whilst the number and senders of letters received were recorded in many diaries and letters, the focus of many soldiers turned to the trials and tribulations of replying. Time became an issue, and Benjamin Leane, writing on 4 January 1916, was one of many who mentioned the absence of time to reply to the multitude of letters received, stating:

It’s good to get all these lovely letters – but when am I going to reply to them all!

Others simply consolidated their replies by writing one letter and requesting that messages be passed on to the named individuals, apologising that they couldn’t personally reply to all the letters they had received.

Finding paper and suitable places to compose said letters were also issues that had to be addressed. In the trenches of Gallipoli, paper was not easy to find and George Courtney Benson lamented halfway through writing a letter that he had to go and find more, returning later to write:

…- and this is the biggest sheet of paper I can find – and I ain’t got no envelope. and the ink’s indelible pencil dissolves and poured into a fount pen. without saying a word about the absence of writing desks. 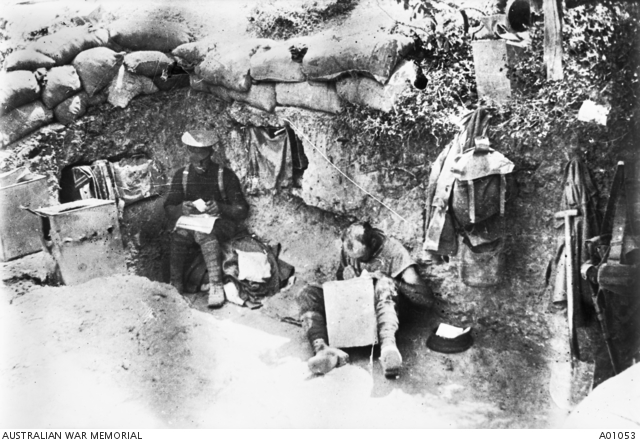 Two soldiers sitting in the 11th Battalion's Commanding Officer's dugout. The soldier on the right is sitting on the ground writing a letter using a box for support. A kit bag and jacket are hanging next to him and to the right is another jacket and a shovel. Two shrapnel damaged metal boxes are in the left foreground.

Despite the challenges that replying to letters presented in the trenches, appreciation for their arrival continued, as well as gratitude that they could still reply to letters. After receiving 15 letters in one drop alone, Vivian Noble recorded in his diary on 11 July 1915:

However I will put on record my deepest gratitude and thanks for the trouble these different people go to to let me know that altho’ buried deep down in the trenches here like a rabbit I have not been completely forgotten.

Robert Antill recognised that he was one of the lucky ones that was still able to write letters home from the trenches in May 1915. Beginning an extended passage about the nature of warfare, he writes the following:

…and as I sit in my little dugout here safe away from the shrapnel that is falling around us, I can thank my lucky stars for being able to write this letter to you.

Understandably, some people are not renowned for their talent with pen and paper.  Consequently, there were also some pointed accusations made when only particular family members were doing the writing. Ernest William Baker was one who did not beat around the bush, complaining to his father in a letter on 22 October 1915:

I say Dad! Here play the game fair. Its your turn to write to me, don’t let the girls do it all.

Some of the above quotes are featured in the Memorial’s initiative Daily Digger which narrates the events of 1915 through the words of those who were there. For every day of 1915, Daily Digger will feature a quote, selected from one of the diaries or letters digitised as part of the digitisation project, Anzac Connections. The quotes will appear on Twitter on the corresponding date in 2015 and can be viewed here.