While serving overseas Australian servicemen and women have often produced publications for their own entertainment and the Memorial collects these in the Troopship and Unit Serials collection. The collection is diverse including publications from the Boer War up to the Peacekeeping in 1980s. However, I think the First World War publications are perhaps the most interesting as they were often less regulated. This means that a lot of the character and humor of the First AIF is able to shine though. My favorite is a trench newspaper which was created during the Gallipoli campaign, The Dinkum Oil .

The Dinkum Oil is an early and unique example of trench newspapers and can be seen as an important way in which the Anzac 'legend' has been transmitted and understood as copies were sent home to families and extracts were published in various newspapers. 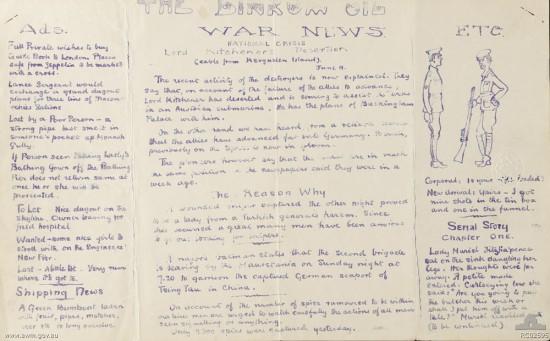 Charles Bean, then the Australian official war correspondent and later official historian, helped create The Dinkum Oil . Bean noted in his diary on 7 June 1915, and later in the official history, that Major Thomas Blamey (who would later become the Australian to attain the rank of Field Marshal) requested the production of a ‘Furphies Gazette’ to quell ‘spy-mania’ and the rumours that were developing through the circumstances of trench warfare. The idea, according to Bean, was that these damaging rumours would ‘be laughed out of court’ through comic sketches and exaggeration.

Bean saw a copy of the 6th Battalion’s humorous trench newspaper called Snipers’ Shots and thought it “really very good indeed”. He discovered that the author, Company Quartermaster Sergeant Francis 'Frank' Noonan, had produced similar newspapers on his troopship and in Egypt. Bean asked that Noonan be allowed to help with the proposed newspaper.

On 11 June, Noonan and Bean got together in Bean’s dugout to compose the first issue of The Dinkum Oil. Bean noted modestly, “I can’t say I ever helped him. All I did was to hold the pen and write clearly. He really has a remarkable wit – the thing is very good indeed.” Eight editions that humorously pointed out the absurdity of life at Gallipoli were issued in just a month.

First World War trench newspapers, especially The Dinkum Oil, were produced under difficult and often dangerous circumstances. The value attached to it by the men, who were facing hardship and horror, is clearly demonstrated by their popularity and the effort that went into their creation. Reading The Dinkum Oil today brings us a perspective of life on Gallipoli, and reveals not only the concerns and experiences of the men but their spirit and humour.