The Seabrook brothers: all three killed at Passchendaele 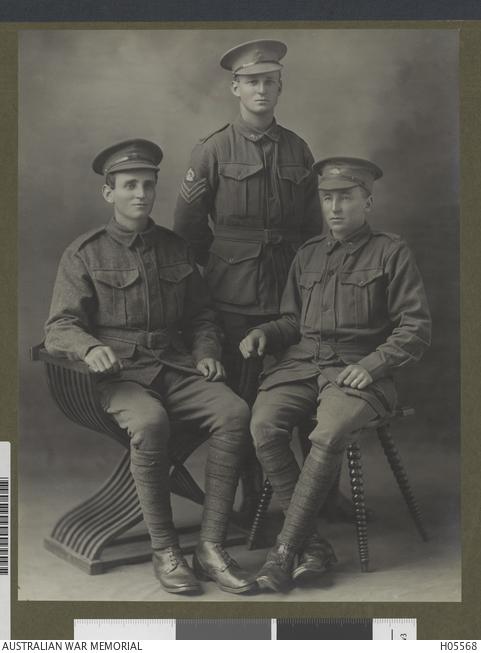 As haunting as any image of the ghosts of Passchendaele is this studio portrait photo of the Seabrook brothers, the sons of William and Fanny Seabrook of Five Dock in Sydney NSW.

Theo (age 25) and George (age 24) were both privates, while their younger brother William (age 20), with his previous military experience, soon made it to Second Lieutenant.  William had in fact joined the AIF back in August 1915, but this had somehow fallen through as he was discharged two months later.  At any rate, he joined up again with his two elder brothers in August 1916 and they left Sydney together as part of the 17th Reinforcements for the 17th Infantry Battalion.

By the time they got over to Belgium to actually join their unit it was already June 1917 and preparations were well underway for the great offensive at Ypres.  The Battle of Menin Road that began on 20 September 1917 was the first engagement of Australian infantry in this offensive and proved a stunning success.

But despite this success, for the Seabrook boys it was their first, last and only battle.  All three were mortally wounded in action, and died in the days immediately afterwards.  For some the war was very short, but the sacrifice was nevertheless the full measure.

One can scarcely begin to imagine what went through the minds of William and Fanny Seabrook, and how they might come to terms with this perhaps baffling and seemingly pointless loss of their three cherished sons.

William is buried at the Lijssenthoek Military Cemetery, just west of Ypres.  George and Theo's remains were either never identified or never found, so they  are commemorated on the Menin Gate Memorial.