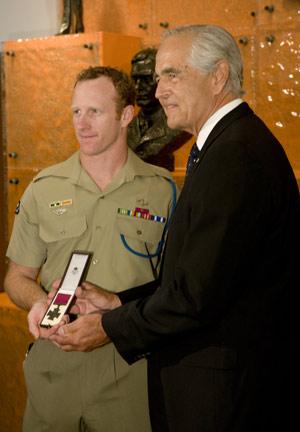 In a ceremony this morning, Trooper Mark Donaldson VC loaned his newly awarded medal to the Australian War Memorial for public display.  Trooper Donaldson, who on Friday became the first Australian serviceman in almost 40 years to be awarded the famous medal, is also the first to receive it under the title of 'The Victoria Cross for Australia', as part of the Australian system of honours and awards.   His is the first VC ever awarded to a member of the Australian Army's elite Special Air Service Regiment.  Memorial Director Steve Gower said at the presentation that "loaning his Victoria Cross to the Australian War Memorial so soon after its presentation is an incredibly generous offer and we are delighted to place it on public exhibition."

The award of the Victoria Cross was made following Trooper Donaldson's heroic actions when his patrol was ambushed in Oruzgan Province, Afghanistan, on 2 September last year.  The citation for the medal reads, in part: "In the early stages of the ambush, Trooper Donaldson reacted spontaneously to regain the initiative.  He moved rapidly between alternate positions of cover engaging the enemy with 66mm and 84mm anti-armour weapons as well as his M4 rifle.  During an early stage of the enemy ambush, he deliberately exposed himself to enemy fire in order to draw attention to himself and thus away from wounded soldiers.  This selfless act alone bought enough time for those wounded to be moved to relative safety."  As the ambushed vehicles manoeuvred to withdraw, with the unwounded members of the patrol running alongside, a severely wounded Afghani interpreter was accidentally left behind.  The citation continues: "Of his own volition and displaying complete disregard for his own safety, Trooper Donaldson moved alone, on foot, across approximately 80 metres of exposed ground to recover the wounded interpreter.  His movement, once identified by the enemy, drew intense and accurate machine gun fire from entrenched positions.  Upon reaching the wounded coalition force interpreter, Trooper Donaldson picked him up and carried him back to the relative safety of the vehicles then provided immediate first aid before returning to the fight."  The patrol was ultimately able to disengage from the action and withdraw with its wounded, all of whom survived.  As the citiation concludes: "Trooper Donaldson's actions on this day displayed exceptional courage in circumstances of great peril.  His actions are of the highest accord and are in keeping with the finest traditions of the Special Operations Command, the Australian Army and the Australian Defence Force."

It is anticipated that Trooper Donaldson's medals will be placed on public display in the Australian War Memorial's Conflicts 1945 to today galleries by the end of February.