The V2 rocket – how it worked and how we acquired it 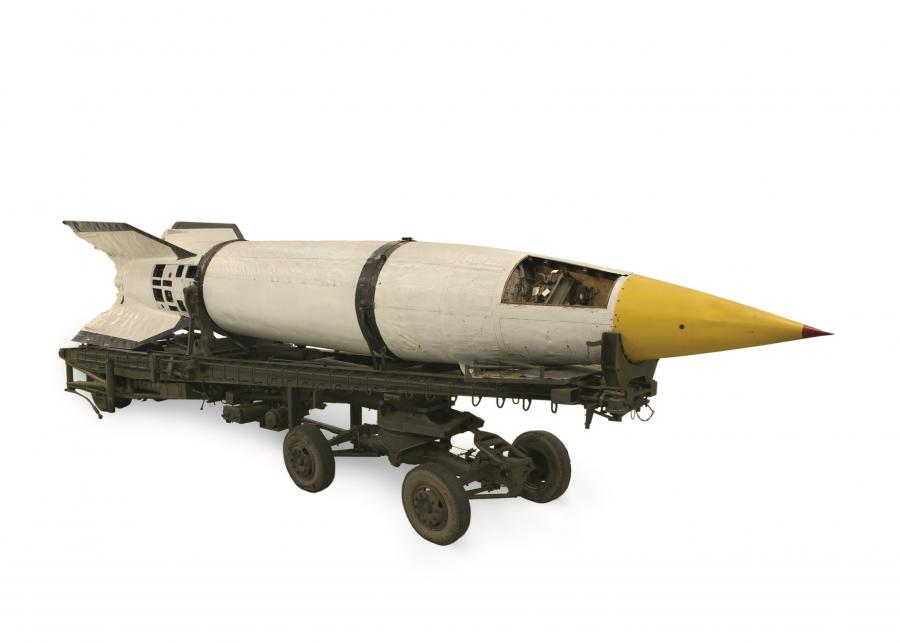 V2 on Meillerwagen in storage at the Australian War Memorial

The V2 rocket – how it worked

The V2 rocket was the first ballistic guided missile to use advanced rocket technology and to be used in war by the Nazi’s against the Allies. Developed by Wernher von Braun in 1936, it was developed from his research into liquid fuelled rockets during his time studying at the Technical University of Berlin with the Hungarian-German father of rocketry, Hermann Oberth.

The final V2 design weighed 12,500 kg, was 14 m in length and 1.65 m in diameter. It was 17 times more powerful than the largest rocket engine at the time and flew at five times the speed of sound. It was powered by a liquid propellant rocket engine of liquid ethanol (which took 30 tons of potatoes to fuel a single launch) and liquid oxygen. A mixture of 75% ethyl alcohol and 25% water and liquid oxygen were delivered into a thrust/combustion chamber by two rotary pumps. The pumps were driven by steam created by two auxiliary fuels, one made of T-Stoff (80% high-test hydrogen peroxide), the other 66% sodium permanganate and 33% water. This method of propulsion generated extreme heat, approximately 2,700˚C, inside the combustion chamber, which was cooled by the liquid ethyl alcohol flowing first to the base of the combustion chamber, then through the double-lined walls on its way to the injectors at the top of the chamber (see image 1). While combustion was taking place, the superheated exhaust gases flowed to the nozzle end of the combustion chamber and into the bell-shaped exhaust, where the rapidly expanding gases would produce the extreme thrust of the V2 rocket. 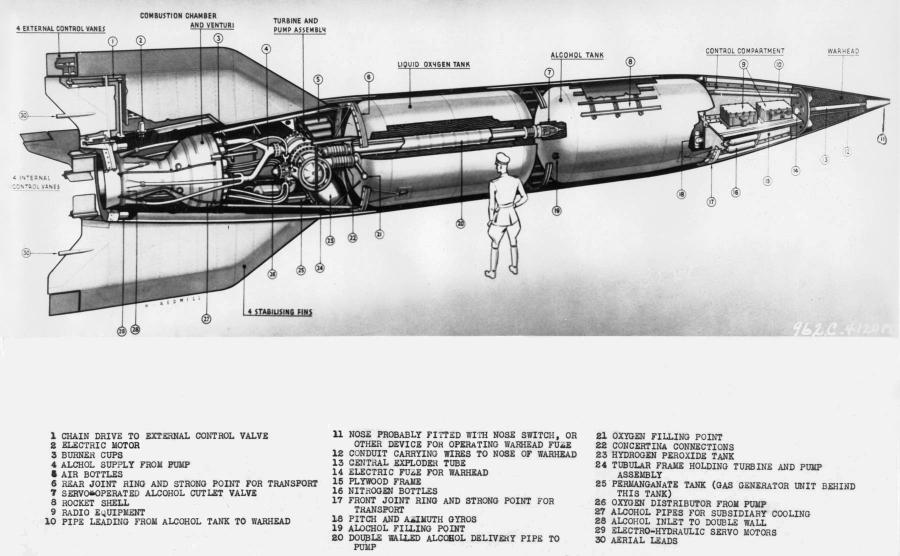 After the initial ignition the pressure of thrust would be at 3 tons, which took three seconds. This time was used to observe good ignition and look for any obvious faults. After that, pressure rose to 25 tons, lift-off would occur soon after, the fuel would burn for a further 60 seconds. At 30 seconds, the V2 would reach the speed of sound, 1,235 km/h; at 60 seconds it reached its peak speed of 5,760 km/h. Soon after this, the fuel would be exhausted and the V2 would be in free flight and subject to atmospheric conditions.

The trajectory of the V2 was only controllable during the launch period through the use of two gyroscopes, one for stabilisation and the other for guidance that would steer the four graphite rudders and vanes. The V2 would reach a predetermined velocity in which the guidance system would shut down. This would then start the parabolic free-fall back to earth and to its target. At this point there was no way to alter its course and it would be susceptible to drift, side winds, headwinds, and tailwinds – which meant it could fall anywhere within a 25 km radius from its expected target.

The V2 could be launched from a launching table at a launch site or from the six wheeled transport and launching trailer called the Meillerwagen, a reusable steel launching pad that enabled the V-2 to be transported to any location before launch and made detecting a launch site extremely difficult (image 2). This added a psychological element to the V-2 attacks as they could be launched from anywhere at any time, and being supersonic they produced no sound until impact. 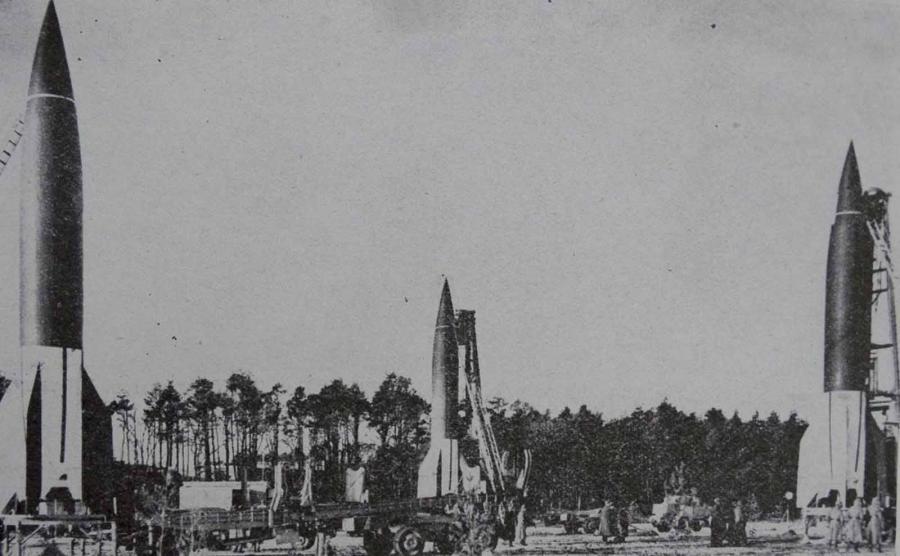 V2 rockets being prepared for launch 1944 (left and right) placed over launching tables (centre) from a Meillerwagen. Image courtesy of Rare Historical Photos

The AWM V2 rocket – History and how we acquired it

The V2 rocket currently in the Memorial’s collection was initially brought to Australia by the British Long Range Weapons Organisation (BLRWO) and the Long Range Weapons Establishment (LRWE). On 19 December 1946 it had been decided that German technology from the Second World War should be available for display in Australia for those wishing to display it and use it for research. It would have been one of the V2 rockets that the British were able to reconstruct from parts taken from three sites: the Mittelwerk factory near the Mittelbau-Dora concentration camp in the Nordhausen area; an abandoned rail shipment outside Jerxheim; and parts recovered near Lesse during Operation Backfire.

The bill of lading, dated 2 September 1947 for the SS Port Lincoln, denoted that all twenty items in the table below were loaded and to be transported to Australia. On 9 September the Port Lincoln set sail for Adelaide and arrived on 12 October 1947. From there the items were transported to the LRWE at Salisbury. The V2 rocket mentioned in item 19 and the Meillerwagen mentioned in item 17 would become the V2 rocket and Meillerwagen in the Memorial’s collection today. 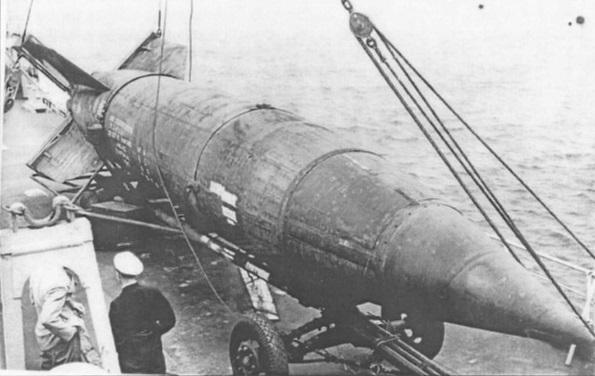 V2 arriving in Adelaide on the Vidalwagen aboard the SS Port Lincoln October 1947. Copyright: Adelaide Advertiser. 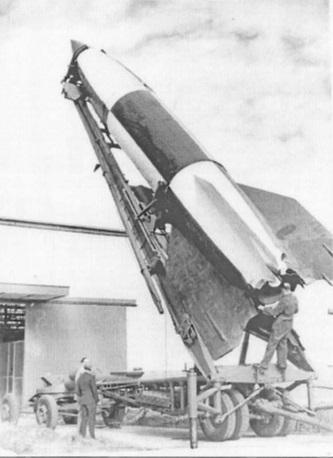 After its arrival in Salisbury, SA, the V2 and Meillerwagen were prepared to be displayed around Australia. Arriving with a dark green coating, likely from a preservative spray for the sea voyage (image 3), the V-2 was painted in a black and white chequer pattern to feature in Adelaide for the Army and Lord Mayor’s display between 4 and 7 February 1948 (image 4). The V2 and Meillerwagen were kept in storage at Salisbury between 1948 and 1957. They were periodically showcased in different displays, such as the RAAF Base Mallala for Air Force Week, 13-20 September 1954, and the Royal Adelaide Show (image 5). During its time in storage it was painted silver by the LRWE. 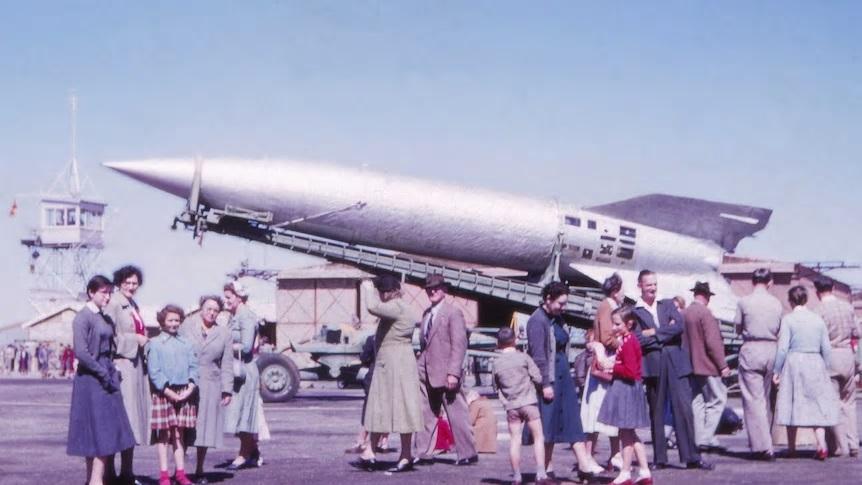 V2 on Meillerwagen on display at RAAF Base Mallala for Airforce Week, 13–20 September 1954, painted silver. Courtesy of Mallala Museum via ABC.

In the meantime, the RAAF had asked to borrow the V2 and Meillerwagen for display in Sydney during Airforce Week in August 1957. The loan was approved and on 30 July 1957 the V2 was unloaded at RAAF Base Richmond, where images taken show that the V-2 had suffered a break between the fuel compartment and engine during handling (image 6). While on display during RAAF Week it had been painted in a white and black colour scheme (image 7). This suggests that the RAAF had painted it sometime during their temporary custody of the V2, and is the colour scheme seen today.

Eventually the V2 and Meillerwagen made their way to Canberra, arriving on 10 October 1957. They were stored at the AWM Duntroon Store on today’s Duntroon site; in the 1970s they were moved to the Memorial’s Mitchell A Annex and the Treloar Technology Centre in the 1990s, where they are safely stored and undergoing conservation treatment. 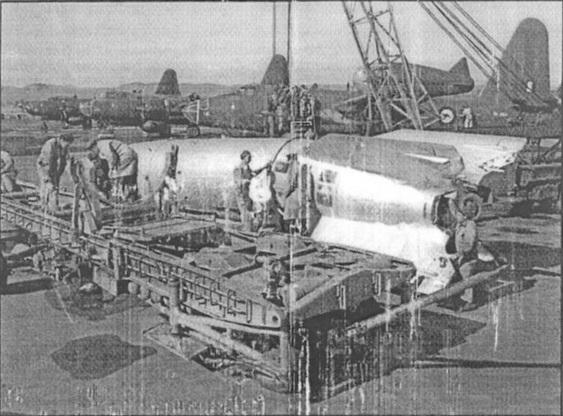 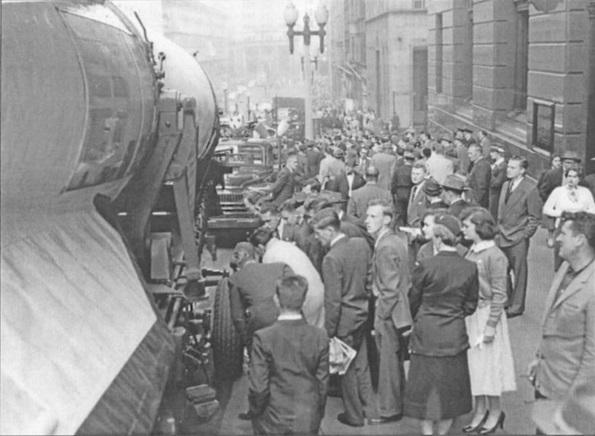 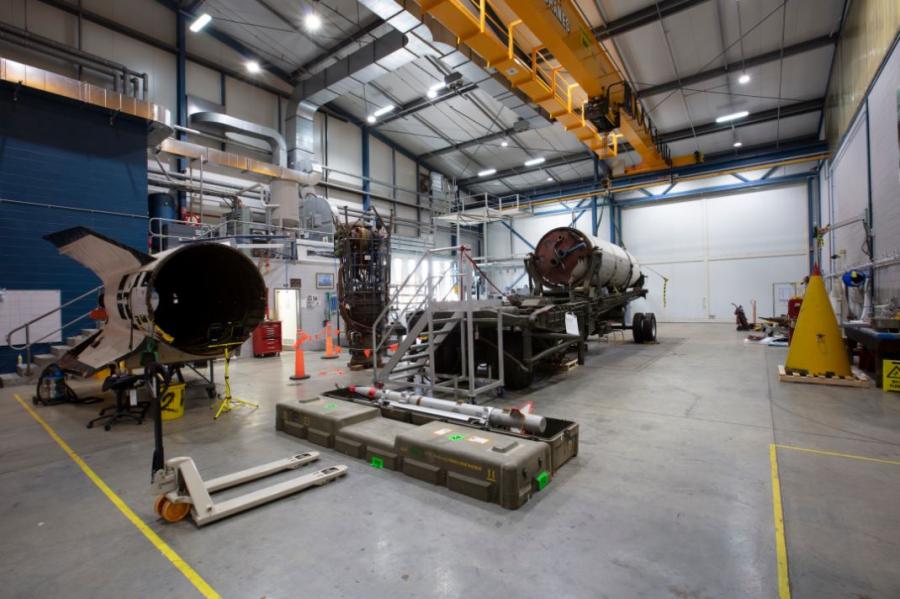 Learn more about our conservation project
Find out more