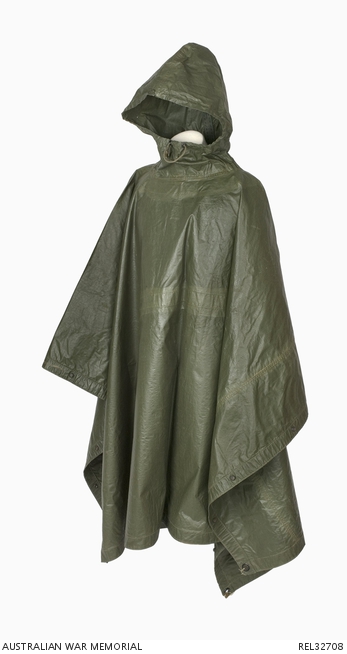 Olive drab nylon twill multi-purpose poncho with attached hood, and eyelets and press-studs for attaching to other ponchos. Around the face and head opening at the top of the poncho is a green cotton drawstring. Handwritten in black ink on the rear neck is 'LUPTON'. On the inside lower flaps is handwritten 'Steven Lupton' twice in black ink. Printed in black ink on the inside flap is 'Poncho, Coated Nylon Twill / FSN-8405-200-0550 / Kenneth M. Wilson Co., Inc. / 19 June 1964. DSA-1-4543 / Multipurpose ponchos. / Raingarment and Ground sheet. / Blanket or Sleeping bag cover (snap the two long edges together). / Tent (snap two ponchos together as side walls). Floor (third poncho will snap inside tent as a floor). Two open tents will go end to end with common center pole.'. There is a small puncture hole in the side of the poncho. Several scuff marks and stains are also visible on the object.

United States Army issue waterproof 'poncho' used by Lance Corporal Thomas William John Lupton in South Vietnam. Born on 28 March 1943, Lupton served in South Vietnam with 13 Platoon, C Company, 1 Battalion, The Royal Australian Regiment from 5 June 1965 to 3 June 1966. Official and un-official swapping and sourcing of equipment between the Australian and United States forces during the Vietnam War was common. This was particularly so for 1RAR, who were assigned to be the third Battalion within the United States Army 173rd Airborne Brigade, operating out of Bien Hoa Province, South Vietnam, during 1965 -1966.