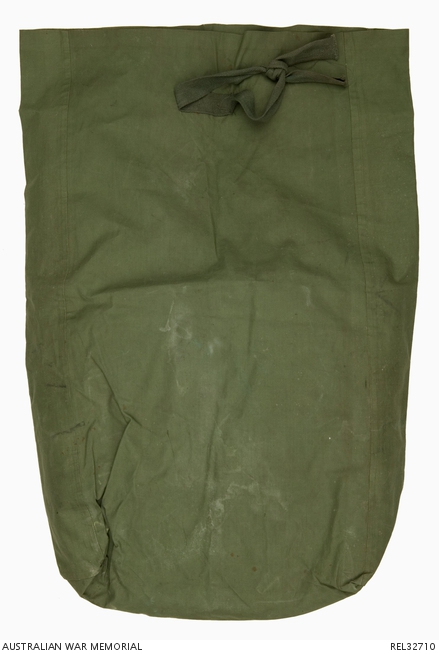 Olive green waterproof cotton kitbag with two piece tie off strap on one side. On the inside of the kitbag the manufacturer's stamp 'G.STRAUSS & SONS.' with a government issue broad arrow underneath.

This waterproof kitbag was used by 213548 Lance Corporal Thomas William John Lupton. Born on 28 March 1943, Lupton served in South Vietnam with 13 Platoon, C Company, 1 Battalion, The Royal Australian Regiment from 5 June 1965 to 3 June 1966. Kitbags were well known for their ability to carry many items of a soldiers personal equipment such as his spare uniform, toiletries and civilian clothing. Kitbags were used when transiting between bases and they were not carried on patrols or ambushes in the jungle due to their impracticability, heavy weight and size.