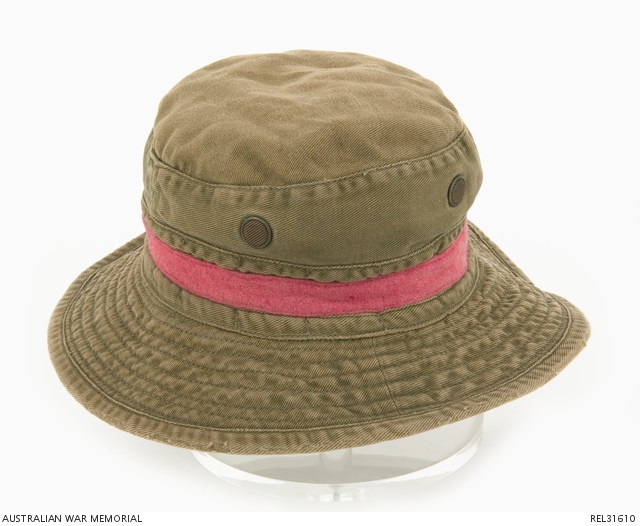 Faded olive green short brimmed bush hat with two pairs of metal eyelets in the sides of the crown. A fine gauge mesh is in each metal eyelet. An 18mm diameter band of red flannel is machine sewn around the exterior of the crown. Handwritten in faded black ink on the side of the crown is "LUPTON" in 9mm high text.

Bush hat worn by Lance Corporal T W J Lupton during his service in Vietnam. During the Vietnam war, the opposing Viet Cong (VC) fighters were regularly known to wear similar shaped hats of both local and of Chinese or Soviet manufacture. As a result, Australian troops often needed to modify their hats to differentiate them from similar hats worn by the enemy. Modifications often included particular coloured bands either interwoven through loops in the exterior of the hat or actually sewn into the exterior of crown. This particular hat has a red band of flannel machine sewed around the crown. The wearer of this hat during the Vietnam war was 213548 Lance Corporal Thomas William John Lupton. Born on 28 March 1943, Lupton served in South Vietnam with 13 Platoon, C Company, 1 Battalion, The Royal Australian Regiment (RAR) from 5 June 1965 to 3 June 1966. He later served nine years in the Australian Regular Army. He retired from the Army with the rank of corporal with 2RAR. At the time of his deployment to South Vietnam, 1RAR was the third Battalion of the United States Army 173rd Airborne Brigade. The red band indicates he was a member of a gun group. The hat was worn reversed (with no band visible) when he was not a member of the group.