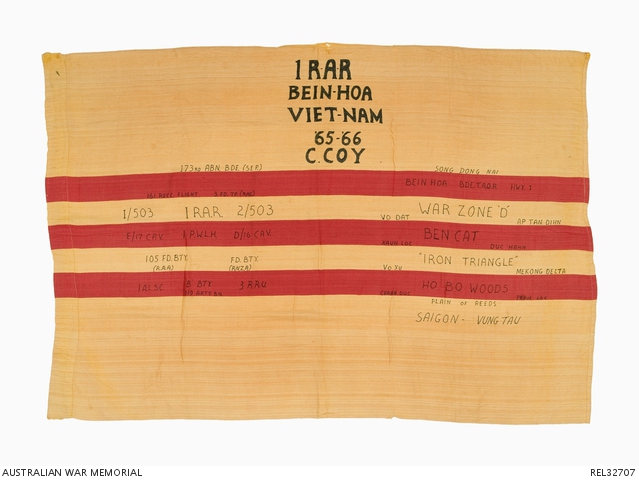 This flag has many of the locations in South Vietnam that the 1st Battalion Royal Australian Regiment (RAR) served in during their first tour of duty in 1965-1966. The location of Bien Hoa has been misspelt 'BEIN HOA' on the flag. There are also many Australian and Allied units written on this flag, such as the US Army 173rd Airborne Brigade, the New Zealand Field Artillery Battery and the Australian Army Prince of Wales Light Horse Regiment, 161 Reconnaissance Flight and 105 Field Artillery Battery. By early 1965, when it had become clear that South Vietnam could not stave off the communist insurgents and their North Vietnamese comrades for more than a few months, the US commenced a major escalation of the war, and by the end of the year it had committed 200,000 troops to the conflict. As part of the build up, the US government requested further support from friendly countries in the region, including Australia. The Australian government dispatched 1 RAR, in June 1965 to serve alongside the US 173rd Airborne Brigade in Bien Hoa province.