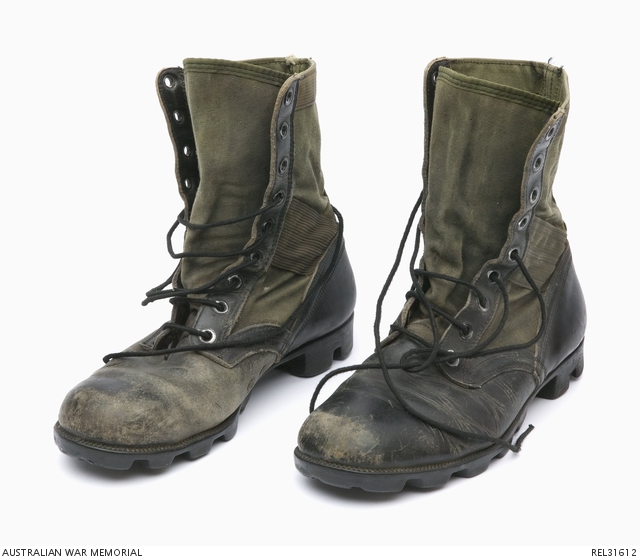 Pair of badly scuffed leather and green canvas US issue Vietnam War era jungle boots. The black laces in both boots appear to be replacements, as they are clean compared to the rest of the boots. The instep of both boots has a pair of circular brass eyelets with a several tiny holes for draining water from inside the boot. The black rubber soles on both boots have remnants of dirt in the grip. In the arch of the heel is the boot size of '(10R)' and the manufacturers stamping of '(C.I.C.)' with 'GENESCO' below. Both boots have a removable light brown mesh insert inside for increased wearer comfort.

2213548 Lance Corporal Thomas William John Lupton was born on 28 March 1943. During the Vietnam War Lupton served in South Vietnam with 13 Platoon, C Company, 1 Battalion, The Royal Australian Regiment (RAR) from 5 June 1965 to 3 June 1966. He later served nine years in the Australian Regular Army. He retired from the Army with the rank of corporal with 2RAR. These boots may be associated with his later service.