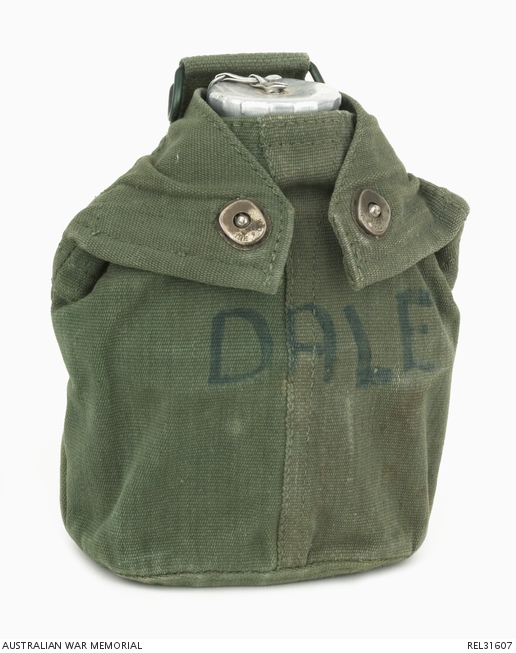 Unpainted aluminium water bottle with attached aluminium screw top lid. The lid is secured to the water bottle by an aluminium chain. An unpainted aluminium cup that fits the base of the canteen is fitted to the bottom. The cup has a two part fold out aluminium handle. This handle is pop riveted to the cup. The bottle is in its original olive green pouch. Two metal press studs are on the front of this pouch, each with 'THE LIFT DOT' stamped into them. Handwritten on the front of the pouch in dark blue ink is 'DALE'. On the rear of the pouch is a canvas flap with a metal loop for attaching to the webbing belt. On the inside of the pouch in black ink is stamped 'M.W. & S. 1966 / O.N. 973-7179' (Government broad arrow). There are no manufacturer's markings on either the water bottle or cup.

These types of water bottles were used by the Australian Army during the Korean War, Malayan Confrontation and during the early to mid period of the Vietnam War. The metal lids were often replaced with a much quieter rubber lid, as combat experience proved that the metal ones were too loud when opening or closing. This particular bottle was used by 213548 Lance Corporal Thomas William John Lupton. Born on 28 March 1943, Lupton served in South Vietnam with 13 Platoon, C Company, 1 Battalion, The Royal Australian Regiment (RAR) from 5 June 1965 to 3 June 1966. He later served nine years in the Australian Regular Army. He retired from the Army with the rank of Corporal with 2RAR.