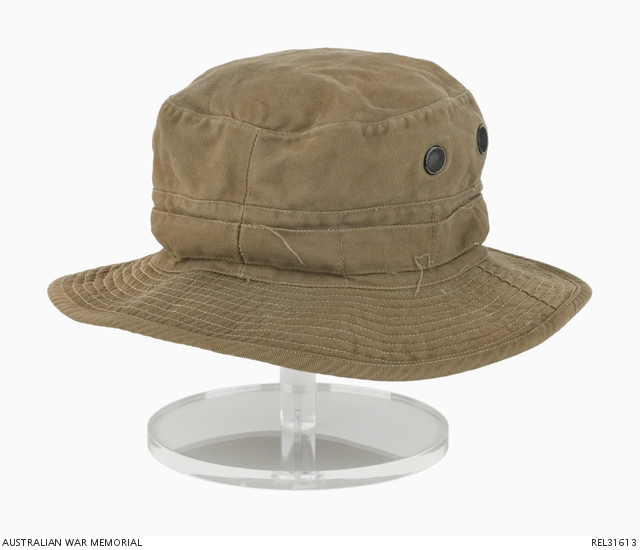 A short brimmed light brown cotton bush hat with a Chinese manufacturers tag sewn into the inside of the crown. This tag has 'Golden Paddy - MADE IN CHINA' embroidered in English with some Chinese writing in gold and silver embroidery around it. On the tag handwritten in black ink is 'G? LUPTON'. Each side of the crown has a pair of metal eyelets painted black. Each eyelet has a fine black mesh except for one which has this mesh removed.

During the Vietnam War both the Australians and their adversaries, the Viet Cong and North Vietnamese Army, commonly wore short brimmed hats on patrol and in battle. This hat is interesting as it is of Chinese manufacture and the Communist Chinese supported the North Vietnamese Army and the Viet Cong during the war. This hat was worn by 213548 Lance Corporal Thomas William John Lupton. Born on 28 March 1943, Lupton served in South Vietnam with 13 Platoon, C Company, 1 Battalion, The Royal Australian Regiment (RAR) from 5 June 1965 to 3 June 1966. He later served nine years in the Australian Regular Army. He retired from the Army with the rank of corporal with 2RAR.