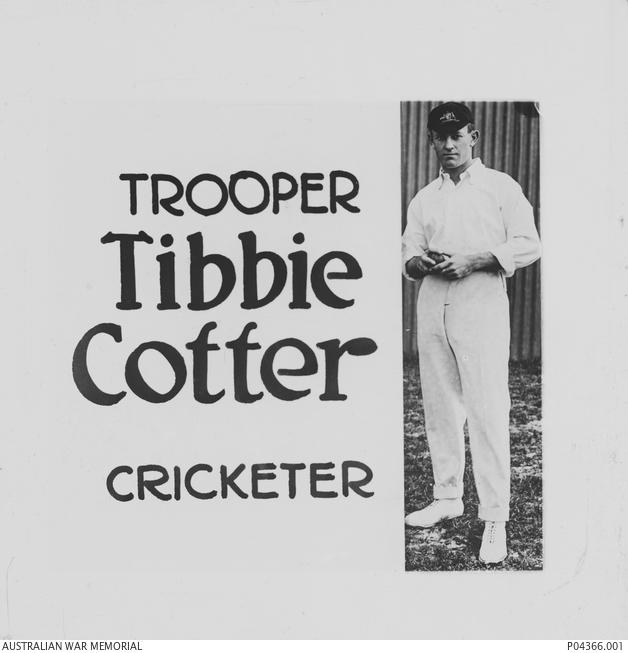 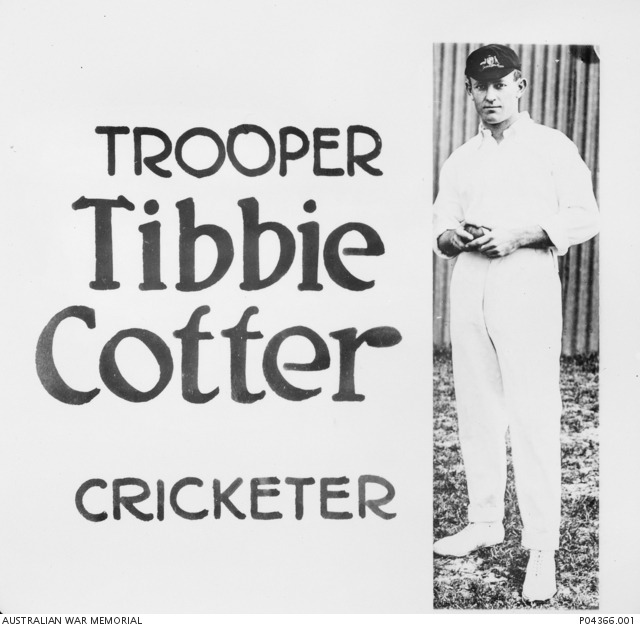 An AIF recruiting lantern slide featuring a portrait of Australian test cricketer Albert Tibbie (or Tibby) Cotter. A well known sportsman, Cotter established his cricketing ability whilst at school in Sydney, and by the age of 18 was playing for New South Wales. When he was 20 years old he was selected to bowl for Australia. In a nine-year international career he played in 21 Tests, taking 89 wickets for an average of 28.64 runs. Cotter joined the AIF in April 1915, aged 31. The enlistment of a former sporting champion was seen as powerful publicity for the AIF recruiting campaign. Despite having no great riding ability, he was accepted into the Australian Light Horse. 924 Trooper (Tpr) Cotter embarked with the 3rd Reinforcements, 12th Light Horse Regiment, from Sydney aboard HMAT Runic (A54) on 9 August 1915. After briefly taking part in the final months of the Gallipoli campaign, Tpr Cotter was deployed with his unit to Palestine, where he was commended for his "fine work under heavy fire" during the second battle of Gaza. The official history remarked "he behaved in action as a man without fear". In May 1917 he was briefly promoted to the rank of lance corporal, but reverted to trooper two months later at his own request. On 31 October 1917 the 4th Light Horse Brigade, of which the 12th Regiment was part, captured Beersheba after a brilliant cavalry-style charge. Tpr Cotter was serving as a stretcher bearer. At the end of the charge, as troops dismounted to engage the enemy, he was shot dead by a Turkish soldier at close range. Tpr Cotter's elder brother, 5678 Private John Cotter, 4th Battalion, had been killed in action in France less than a month before, on 4 October 1917. This slide is one of a series used in a 1917 recruiting campaign to encourage sportsmen to enlist in a sportsmen's unit, such as had been successfully raised in England. The concept was not as popular in Australia.