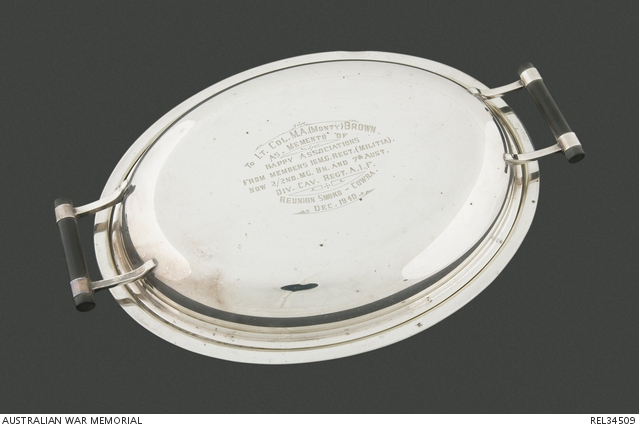 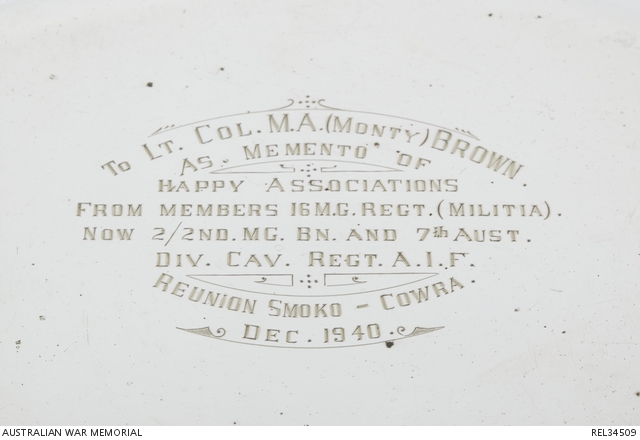 Oval shaped electro plated nickel silver dish with lid. The lid has a pair of 70 mm long by 10 mm diameter ebonite handles attached at either end. The handles are attached to the lid by a pair of electro plated nickel silver arms. On top of the lid is engraved 'TO LT. COL. M.A. (MONTY) BROWN / AS MOMENTO OF / HAPPY ASSOCIATIONS / FROM MEMBERS 16 M.G. REGT. (MILITIA). / NOW 2/2ND. MG. BN. AND 7th AUST. / DIV. CAV. REGT. A.I.F. / REUNION SMOKO - COWRA / DEC. 1940.' The lip of the base has a small dent on one side. Further along this lip on the reverse is stamped 'HECWORTH / E.P

This presentation dish is associated with the Second World War service of Montague Ambrose 'Monte' Brown. Brown was born near Bega, NSW in 1899 and was educated at St Joseph's College, Hunters Hill. On leaving school he returned to the New South Wales south coast where he was active in the pre-war Australian Army militia, serving with 1 Light Horse as a trooper from 31 December 1909. On 1 April 1910 he was promoted to corporal and three months later to sergeant. In July 1912 he transferred to 28 Light Horse where he promoted to regimental sergeant major on 1 January 1913. Brown was offered a commission to 2nd lieutenant on 1 August 1913.