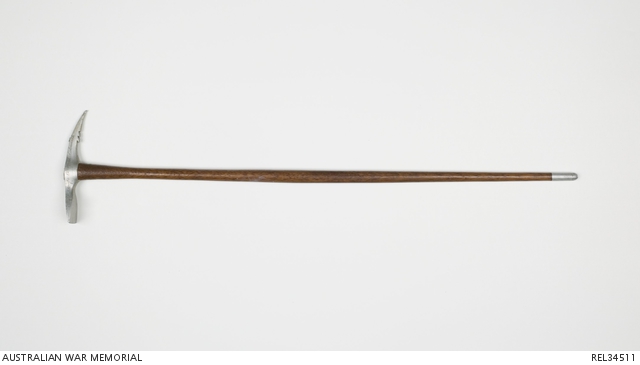 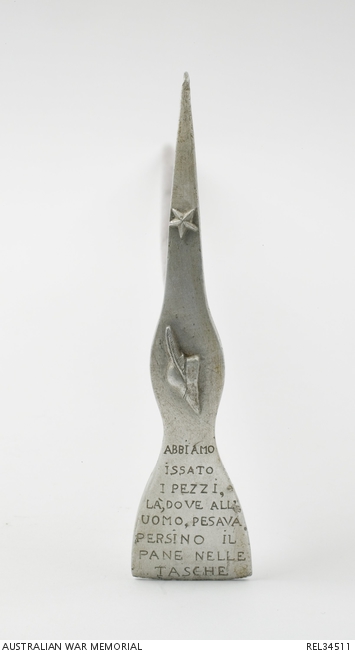 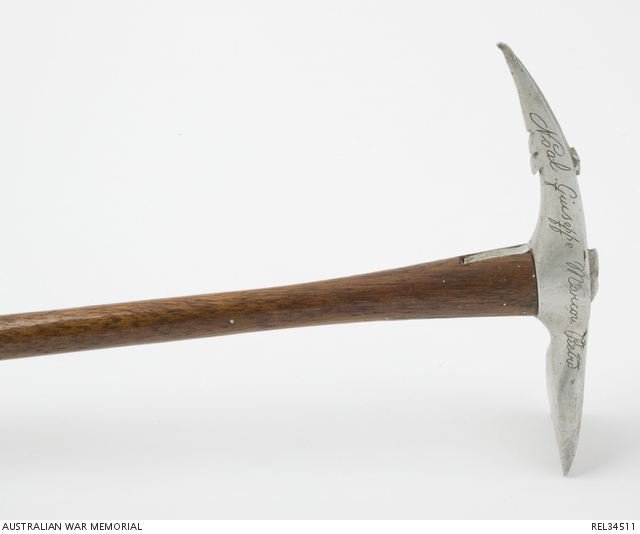 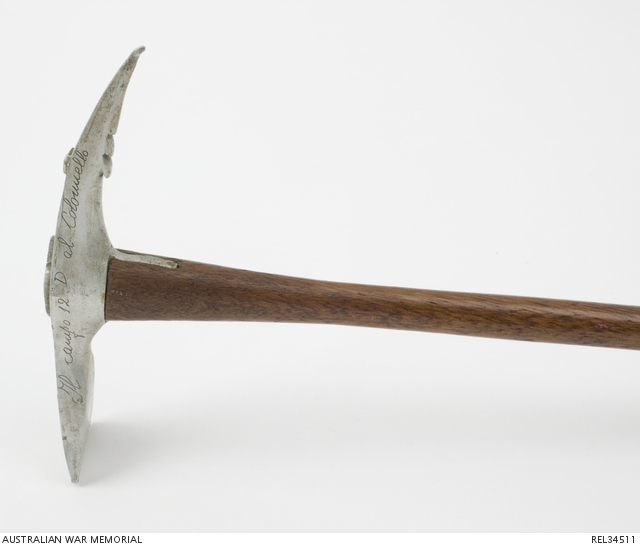 A trench art miniature Ice axe consisting of an aluminium head and polished wooden shaft. The head consists of a blunt shaped adze and a pick including three serated edges on the bottom surface. The head of the ice axe is natural aluminium and features an embossed 'alpini' style feathered head dress of the Italian Mountain Infantry and a five pointed star. The side of the head is engraved the name 'Noal Giuseppe Morcon Pietro'. On the opposite side is engraved 'Il campo 12 D al Colonnello". On top of the adze is engraved 'ABBIAMO ISSATO I PEZZI, LA, DOVE ALL' UOMO, PESAVA PERINO IL PANE NELLE TASCHE'. On the base of the shaft is an aluminium tip measuring 28mm long by 8mm diameter.

This trench art ice pick was made by Italian prisoners of war, Guiseppe Noal and Pietro Marcon, interned in Camp 12 at Cowra, NSW and was given to the Group Commandant of 22 Garrison Battalion, Montague Ambrose 'Monte' Brown.

Private Guiseppe Noal was a fitter and mechanic born in Piove di Sacco, Padova Italy on 12 April 1920. He was taken prisoner at Greece on 10 February 1942 while serving with the artillery.

Private Pietro Marcon was a butcher born in Rosano Veneto, Vincenza on 13 June 1918. He was taken prisoner at Libya on 13 February 1941 while serving with the Alpine Corps.

They were held as prisoners in the Middle East until they were sent to Australia arriving in October 1941 and were interned in the Prisoner of War Camp at Cowra, New South Wales, where this pick was made. In February 1944 they were transferred to Gaythorne Camp in Queensland, and then Home Hill, before returning to Gaythorn, and back to Cowra in January 1946, before being repatriated to Italy on board Alcantara on 23 December 1946.

Lieutenant Colonel Brown was born near Bega, NSW in 1899 and was educated at St Joseph's College, Hunters Hill. He had an extensive service with the Australian and Indian armies.

Considered too old for active service upon the declaration of the Second World War in September 1939, his first posting saw him serve at the Prisoner of War and internment camp at Berrima in the Southern Highlands of NSW. After this he became the Group Commandant of the 22nd Garrison Battalion at the newly built Prisoner of War Camp No.12 at Cowra NSW. Brown left the military in 1947 and died in 1975.