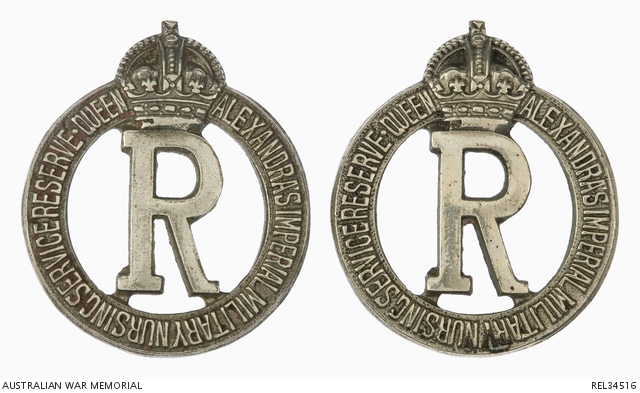 This pair of badges associated with the service of Margaret Mary Byrne who was born at Wilga Park Morongla, near Cowra New South Wales on 18 January 1908, one of nine children born to Charles and Elizabeth Byrne. At an early age she was sent to live with her grandparents Daniel and Margaret Byrne in Mosman, Sydney. Later she followed her older sister Ada to the Dominican Convent school in Moss Vale.

After finishing school she decided upon a nursing career. She spent some time in the Maitland district of NSW with her sister Ada, whom by then had met and married Montague 'Monty' Ambrose Brown. Brown served in the First World War and spent five years attached to the Indian Army from 1917-1922. He later served in the Second World War and was the Cowra Prisoner of War Camp Commandant during the infamous Cowra Breakout in August 1944.

In 1934 Byrne started her nursing studies at Sydney Hospital, finishing there in 1938. After graduating she nursed private patients around the Potts Point area of Sydney, NSW. In 1939 with a group of friends she decided to go to the United Kingdom and Europe and she obtained a private nursing position at the Kingston Hospital near Putney. When the Second World War broke out in September 1939 Margaret with her other Australian friends went to Australia House enquiring about enlisting. After being told that they would have to pay their own fare home to Australia to enlist in the Second AIF, they instead travelled to Whitehall where they were immediately accepted into the British Army's Queen Alexandra's Imperial Nursing Service Reserve. They were all immediately allocated the rank of lieutenant.

Margaret was transferred to Marseilles in France, but due to the deteriorating situation caused by the German Blitzkrieg attacks on France in May to June 1940, she returned safely to London. She then sailed by troop ship to Egypt via Cape Town in 1940. After arriving in Egypt she served around Cairo, Moascar and Ismailia on the Suez Canal. After injuring her knee while diving into a trench during a practice air raid drill in 1942 she was sent home via hospital ship and spent six months recuperating and six months on loan to the Australian Army. She returned to the Middle East in 1943 to No.1 British Hospital Kantara.

Byrne was later posted to various hospital ships, evacuating and treating the wounded from the Italian campaign, and also returning the sick back to India. When the war ended in 1945 she was based in India, from there she travelled to Germany with the occupying Allied forces. In 1946 she returned to the United Kingdom where she was discharged and resumed her pre-war nursing career. In 1949 Byrne decided to return to Australia. She approached Australia House for some financial assistance with her return fare. At Australia House, Byrne found that, as she had lived outside of Australia for many years and served with the British Forces, she was eligible to emigrate to Australia as a 'Ten Pound Pom'!

On her return to Sydney Byrne went back to nursing private patients. While nursing a private patient she met her future husband Billy Plunkett and they were married at Saint Canices Church, Elizabeth Bay. Monty Brown gave Byrne away at the wedding. The Plunketts celebrated almost thirty years of marriage and when Billy Plunkett died, Mrs Plunkett chose to retire to Albury. Margaret Mary Plunkett nee Byrne passed away on 11 April 1996.