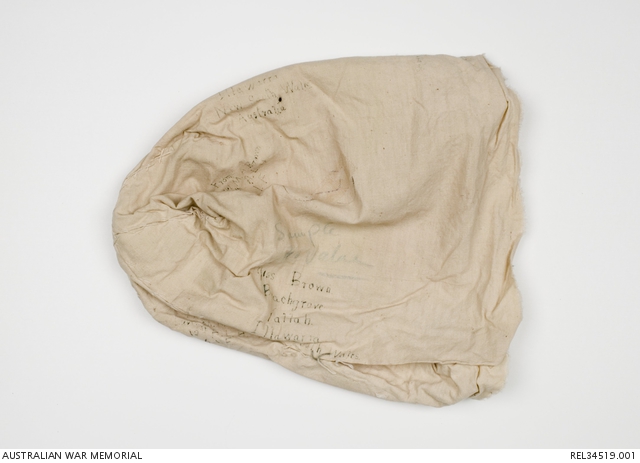 White unhemmed calico bag with hand writing and stamp marks on outside surfaces. This writing consists of 'Miss Brown / Beachgrove / Yallah / Illawarra / New South Wales / Australia' repeated in three different locations, and 'From / Lieut M.A.Brown / 12th A.L.H / A.I.F' is repeated twice elsewhere on the bag. A pair of circular ink stamp marks are also on the exterior surface of the bag. In faded blue ink is hand written 'Sample / no value' with the word value underlined. The bag has been hand stitched with white cotton along the base of the bag and along one side.

This calico bag relates to the service of Montague Ambrose 'Monte' Brown. Brown was born near Bega, NSW in 1899 and was educated at St Joseph's College, Hunters Hill. On leaving school he returned to the New South Wales south coast where he was active in the pre-war Australian Army militia, serving with 1 Light Horse as a trooper from 31 December 1909. On 1 April 1910 he was promoted to corporal and three months later to sergeant. In July 1912 he transferred to 28 Light Horse where he promoted to regimental sergeant major on 1 January 1913. Brown was offered a commission to 2nd lieutenant on 1 August 1913.