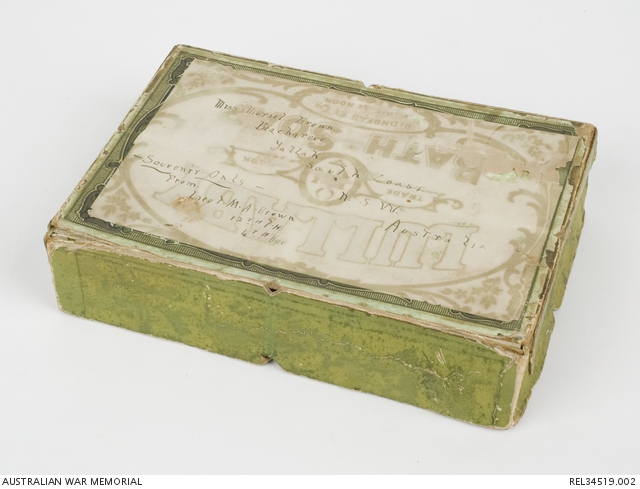 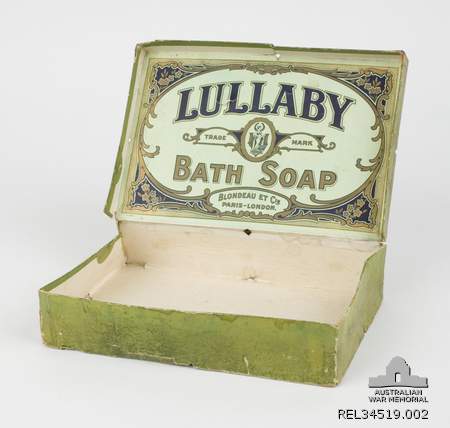 Decorative green cardboard soap box originally made for Lullaby bath soap. The front of the box has a small piece of paper glued over the 'LULLABY BATH SOAP' folding lid. On this piece of paper is hand written : 'Miss Muriel Brown / Beachgrove / Yallah / South Coast / N.S.W. / Australia' Below this is written '-Souvenir Only - / From / Lieut. M.A. Brown / 12 TH L.H / 4 TH Bde'. The original cover has leached through this piece of paper leaving a ghost like effect. The bottom of the box also has a piece of paper glued over the original box face. Hand written in faint lead pencil is 'To Miss Muriel Brown / Beachgrove / Yallah / Illawarra Line / N.S.W. / Australia'. On the left hand side of this writing at ninety degrees is also hand written in pencil 'From / Lieut M.A.Brown / 12th L.H. / 4th Bde / Egypt'. The inside of the folding cover is printed in blue, green and gold the logo for Lullaby Bath Soap, 'LULLABY / TRADE MARK / BATH SOAP / BLONDEAU ET Cie / PARIS-LONDON.' Within the bottom left margin of this design is printed in small text 'V 1319' possibly indicating a batch number.

This soap box relates to the service of Montague Ambrose 'Monte' Brown. Brown was born near Bega, NSW in 1899 and was educated at St Joseph's College, Hunters Hill. On leaving school he returned to the New South Wales south coast where he was active in the pre-war Australian Army militia, serving with 1 Light Horse as a trooper from 31 December 1909. On 1 April 1910 he was promoted to corporal and three months later to sergeant. In July 1912 he transferred to 28 Light Horse where he promoted to regimental sergeant major on 1 January 1913. Brown was offered a commission to 2nd lieutenant on 1 August 1913.

Brown used this Lullaby brand soap box to send a cream coloured shawl to his sister, Muriel Brown, in Australia. This shawl is held within the collection of the Australian War Memorial (REL34519.003 ).