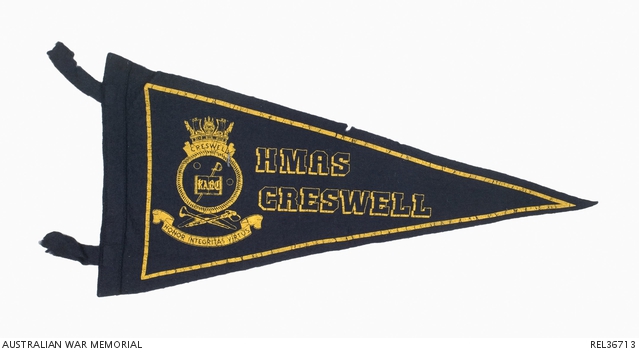 Triangular navy felt souvenir with two suspension loops on the hoist. Screen printed in yellow with 'HMAS CRESWELL' and the ship's badge showing a cutlass blade surmounted by an open book with the letters 'RANC' (Royal Australian Naval College) all within a rope circle surmounted by a naval crown with Creswell underneath the crown. Beneath the circle is a boomerang with surmounted crossed clubs and a scroll bearing the motto 'Honor Integritas Virtus'

This Pennant was a souvenir from HMAS Creswell. In November 1911 Parliament chose the site of Captain's Point, Jervis Bay, NSW for the Royal Australian Naval College (RANC). In 1958 it was commissioned as a shore establishment and named HMAS Creswell, after Vice Admiral Sir William Creswell, KCMG, KBE, the first Naval Member of the Naval Board (Chief of Navy) from 1911-1914.