This image was published in the Sydney Morning Herald on Friday 13th October 1961 with the ... 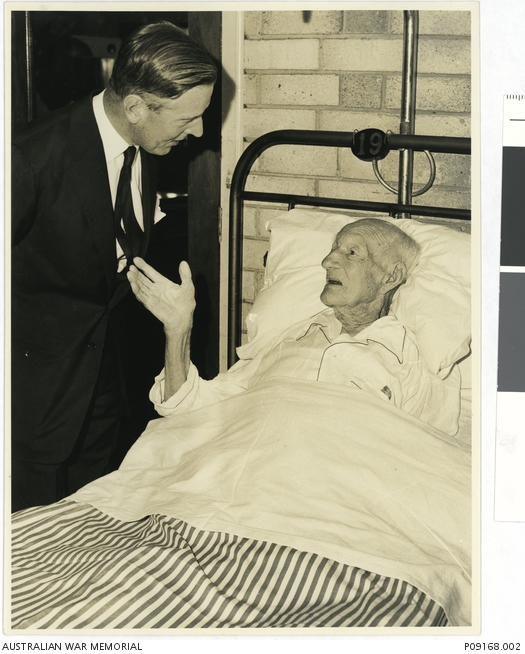 This image was published in the Sydney Morning Herald on Friday 13th October 1961 with the caption "Serviceman's greeting were exchanged when the Governor General Lord De L'Isle met Mr Septimus Greentree at the Narrabeen War Veterans' Home yesterday. Mr Greentree, a South African War veteran, is 92". Septimus Greentree was born on 22 January 1872 at Freeman's Reach, Hawkesbury New South Wales to Robert Greentree and Hannah Greentree (nee Bushell). He travelled to South Africa at the turn of the 20th century where he joined an irregular British South African unit known as Brabant's Horse. This highly mobile Light Horse unit was formed by then Brigadier General Edward Brabant, the South African Colonial commander of the Colonial Division. It had at its peak strength approximately 600 South African colonials, Australians, British and Canadian soldiers. It was heavily involved in fighting irregular Boer Commando units, in particular in the Transvaal. Whilst with Brabant's Horse he attained the rank of Corporal. At some stage in 1901 he discharged from this unit and later served in 1901 and 1902 as an Agent with the South African Field Intelligence Division (FID). The FID conducted a diverse range of field intelligence activities and was considered highly effective at combating the Boers in South Africa. At the conclusion of the Boer War it appears that he stayed in South Africa. When the First World War broke out in September 1914 he was still living in South Africa. He joined the Cape Garrison Artillery (CGA) on 17 September 1914 at Cape Town at the age of 42. His assigned regimental number with this unit was A/51164 and his rank was Gunner. With this unit he travelled to German South West Africa (today known as Namibia) where his unit saw action. He was discharged from this unit in Cape Town on 29 July 1915 after the cessation of hostilities in German South West Africa. He re-joined the South African forces in Cape Town on 22 April 1916, this time with the 11th South African Infantry at the age of 44. His rank was Private and his assigned regimental number was 11681. His unit was raised for service in German East Africa After their successful campaign the unit returned to South Africa. He was honourably discharged from this unit 13 December 1916 in Durban. At some stage after the cessation of the First World War Septimus returned to Australia. Septimus passed away in Sydney NSW in 1961 at age 90.