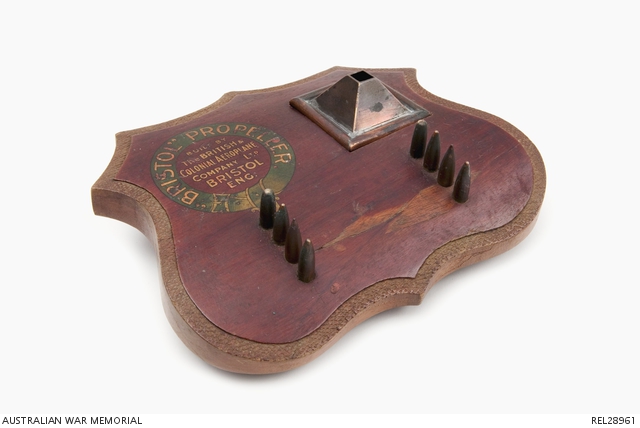 Trench art laminated wood and brass pen and ink desk set in the shape of a shield. The base of the desk set is fashioned from a piece of wooden aircraft propeller, with the original maker's details still attached on a transfer reading 'BRISTOL PROPELLER. BUILT BY The BRITISH & COLONIAL AEROPLANE COMPANY LTD. BRISTOL ENG.' The brass inkwell to the right of the transfer is in the shape of a pyramid on a square plate with a small square opening at the top. Underneath this are two rows of four equally spaced bullets, designed to hold pens and pencils. The round-top bullets at the top of each row are British Mk VI projectiles. The remaining bullets are British Mk VII projectiles. Some of the projectiles have been spent as indicated by the small grooves along the visible length of the bullet. The underneath of the set has four cartridge cases set into the base at varied heights, to act as feet. The two on the right side are of Turkish manufacture, 7.65 X 53 calibre and the two on the left are of German manufacture, 7.92 X 57 calibre.

Made by Lieutenant William Charles Thompson of 'C' Flight, 1 Squadron, Australian Flying Corps (AFC). Thompson was born in Melbourne in October 1894. He was an apprentice turner and fitter with Grinrod & Carter Engineers and Machinists in Victoria from 1913 to October 1915. He enlisted in the AFC on 2 February 1916 as an air mechanic No 325 and was posted to 'C' Flight, No 1 Squadron. He sailed from Melbourne on 16 March 1916 on the troopship RMS Orsova arriving in Egypt on 14 April 1916. On 25 September 1916 he was promoted to 1st Air Mechanic. On 29 November 1917, Thompson began training as a pilot flying DH6, AVRO, BE2E, BE2C, RE8, Martinsyde and Bristol Fighter aircraft. He graduated as a pilot on 25 January 1918 and was promoted to the rank of 2nd Lieutenant. Further training with the School of Aerial Gunnery and the Aerial Observation School followed and he was promoted to the rank of Lieutenant on 25 April 1918 and finally finishing his training on 5 June 1918. Thompson returned to 1 Squadron AFC on 15 June 1918 where he continued to fly Bristol Fighters. He was engaged in patrol, reconnaissance, escort, bombing and despatches in places such as Kutrani, Biara, Waddy Fara and Haifa. Thompson ceased flying on 15 January 1919 and he returned to Australia shortly afterwards. Thompson is mentioned in Vol. VIII AFC, The Official History of Australia for his efforts on an escort and reconnaissance mission on 14 August 1918. The wooden propeller used to fashion the desk set was manufactured by The British and Colonial Aeroplane Company Limited (later Bristol). This company produced the Bristol Scout D (1914), the Bristol Scout Type F1, the Bristol Monoplane, the Bristol F2B Biplane (Fighter), and the Bristol all-metal M.R.I Biplane during the First World War.