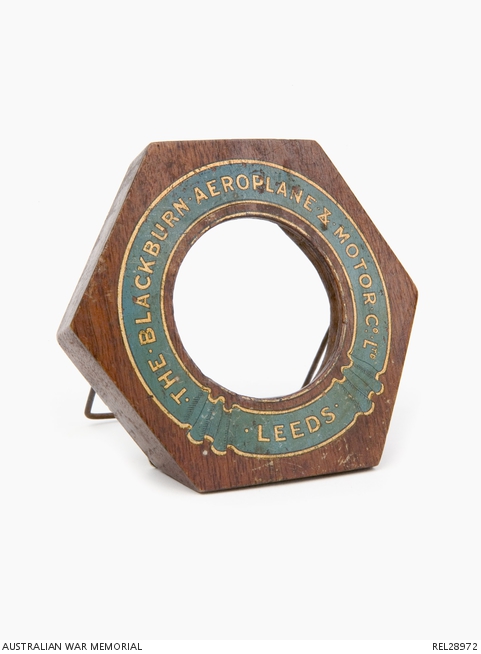 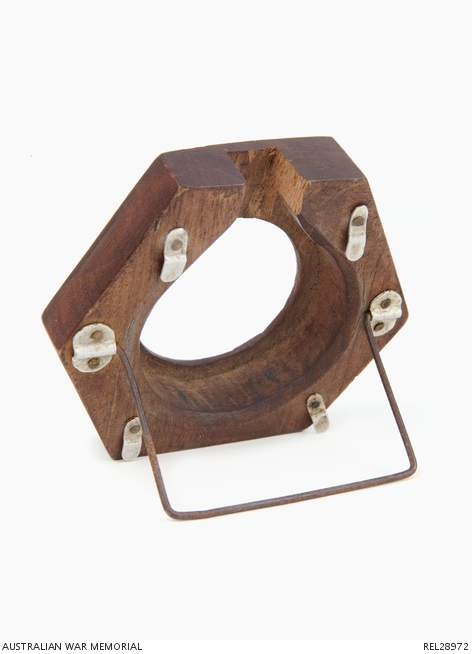 Trench art fob watch holder made from a wooden propeller. The hexagonal shaped holder has a small opening at the top designed to allow access to the watch winding device. The holder rests on a thin square metal stand that is fastened to the back with small aluminium plates that are screwed in to the wood. There are four aluminium backing retainers, two at the top and two at the bottom that are adjustable. A blue and gold transfer containing the details of the original aircraft manufacturer forms a border around the circular opening for the watch. The transfer reads 'THE BLACKBURN AEROPLANE & MOTOR CO. LTD. LEEDS'.

Made by Lieutenant William Charles Thompson of 'C' Flight, 1 Squadron, Australian Flying Corps (AFC). Thompson was born in Melbourne in October 1894. He was an apprentice turner and fitter with Grinrod & Carter Engineers and Machinists in Victoria from 1913 to October 1915. He enlisted in the AFC on 2 February 1916 as an air mechanic No 325 and was posted to 'C' Flight, No 1 Squadron. He sailed from Melbourne on 16 March 1916 on the troopship RMS Orsova arriving in Egypt on 14 April 1916. On 25 September 1916 he was promoted to 1st Air Mechanic. On 29 November 1917, Thompson began training as a pilot flying DH6, AVRO, BE2E, BE2C, RE8, Martinsyde and Bristol Fighter aircraft. He graduated as a pilot on 25 January 1918 and was promoted to the rank of 2nd Lieutenant. Further training with the School of Aerial Gunnery and the Aerial Observation School followed and he was promoted to the rank of Lieutenant on 25 April 1918 and finally finishing his training on 5 June 1918. Thompson returned to 1 Squadron AFC on 15 June 1918 where he continued to fly Bristol Fighters. He was engaged in patrol, reconnaissance, escort, bombing and despatches in places such as Kutrani, Biara, Waddy Fara and Haifa. Thompson ceased flying on 15 January 1919 and he returned to Australia shortly afterwards. Thompson is mentioned in Vol. VIII AFC, The Official History of Australia for his efforts on an escort and reconnaissance mission on 14 August 1918. The wooden propeller used to fashion the fob watch holder was manufactured by the Blackburn Aeroplane & Motor Co. Ltd. based in Leeds. The company produced its first machine in 1910, the Blackburn Monoplane and went on to produce the B.E. 2.C. Biplanes, the Blackburn Kangaroo (Twin Tractor biplane), the Baby Seaplane, the Blackburn Three-Seater Seaplane (Blackburn Twin Seaplane) and the Blackburn Blackbird.