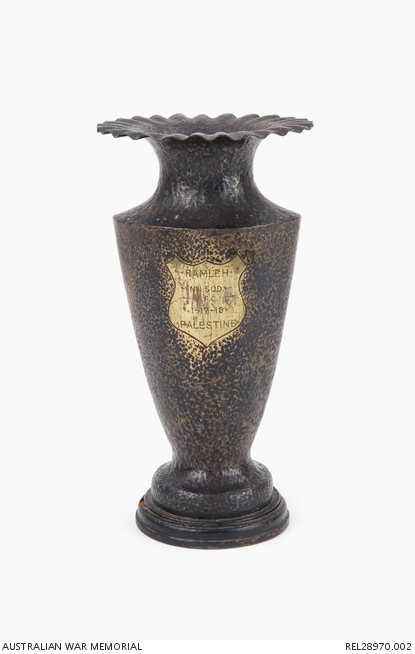 Trench art brass vase made from a 75 mm German shell case, with a separate circular laminated wooden stand. The base of the vase is unaltered and takes the form of the original shell base. The shell has been hammered to produce a textured pattern over the brass surface. The vase narrows slightly a few centimetres from the base, flares out, then narrows again before flaring out into a crimped rim. The main body of the vase is coloured dark brown, faded from the original black shoe polish finish. There is a shield engraved into the front side of the vase. This is uncoloured and shows the original brass. The shield bears the engraved words 'RAMLEH No. 1 SQD. A.F.C. 1917-18 PALESTINE'. The original shell base is impressed with the following details '16 POLTE SEPT 1916 MAGDEBURG SP252'. The wooden stand is painted black around the edge of the circumference. Its laminated wood suggests that it was cut from an aircaft propeller.

Made by Lieutenant William Charles Thompson of 'C' Flight, 1 Squadron, Australian Flying Corps (AFC). Thompson was born in Melbourne in October 1894. He was an apprentice turner and fitter with Grinrod & Carter Engineers and Machinists in Victoria from 1913 to October 1915. He enlisted in the AFC on 2 February 1916 as an air mechanic No 325 and was posted to 'C' Flight, No 1 Squadron. He sailed from Melbourne on 16 March 1916 on the troopship RMS Orsova arriving in Egypt on 14 April 1916. On 25 September 1916 he was promoted to 1st Air Mechanic. On 29 November 1917, Thompson began training as a pilot flying DH6, AVRO, BE2E, BE2C, RE8, Martinsyde and Bristol Fighter aircraft. He graduated as a pilot on 25 January 1918 and was promoted to the rank of 2nd Lieutenant. Further training with the School of Aerial Gunnery and the Aerial Observation School followed and he was promoted to the rank of Lieutenant on 25 April 1918 and finally finishing his training on 5 June 1918. Thompson returned to 1 Squadron AFC on 15 June 1918 where he continued to fly Bristol Fighters. He was engaged in patrol, reconnaissance, escort, bombing and despatches in places such as Kutrani, Biara, Waddy Fara and Haifa. Thompson ceased flying on 15 January 1919 and he returned to Australia shortly afterwards. Thompson is mentioned in Vol. VIII AFC, The Official History of Australia for his efforts on an escort and reconnaissance mission on 14 August 1918.