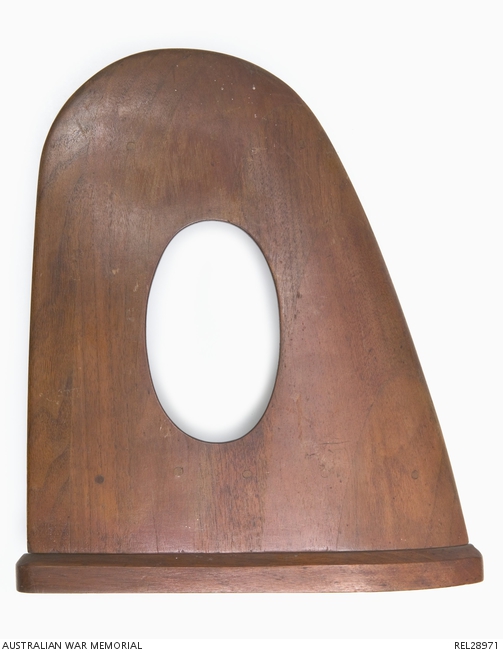 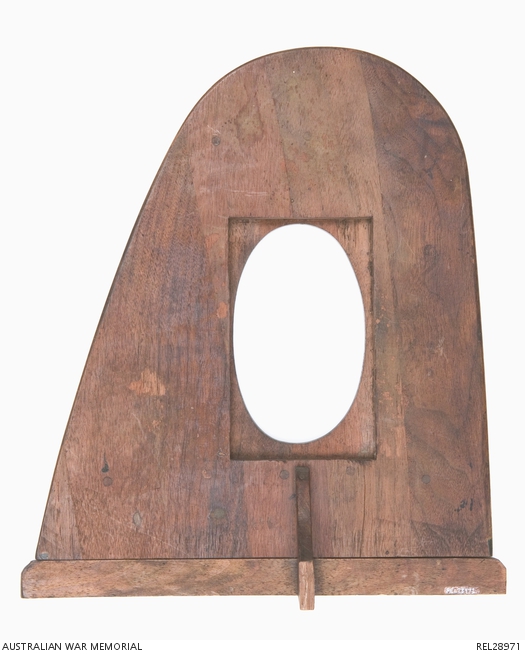 Trench art photograph frame fashioned from the tip of a wooden propeller. The original shape of the tip has not been altered. It is composed of five panels of wood that have been joined together and rounded at the end. The front side is varnished and has a smooth finish. The frame rests on a small wedge of wood fastened to the back by a nail. A wider flat piece of wood is screwed to the bottom of the frame as extra support. The area designed to hold the photograph is cut as a rectangle from the back and an oval in the front, the photograph rests above the oval.

Made by Lieutenant William Charles Thompson of 'C' Flight, 1 Squadron, Australian Flying Corps (AFC). Thompson was born in Melbourne in October 1894. He was an apprentice turner and fitter with Grinrod & Carter Engineers and Machinists in Victoria from 1913 to October 1915. He enlisted in the AFC on 2 February 1916 as an air mechanic No 325 and was posted to 'C' Flight, No 1 Squadron. He sailed from Melbourne on 16 March 1916 on the troopship RMS Orsova arriving in Egypt on 14 April 1916. On 25 September 1916 he was promoted to 1st Air Mechanic. On 29 November 1917, Thompson began training as a pilot flying DH6, AVRO, BE2E, BE2C, RE8, Martinsyde and Bristol Fighter aircraft. He graduated as a pilot on 25 January 1918 and was promoted to the rank of 2nd Lieutenant. Further training with the School of Aerial Gunnery and the Aerial Observation School followed and he was promoted to the rank of Lieutenant on 25 April 1918 and finally finishing his training on 5 June 1918. Thompson returned to 1 Squadron AFC on 15 June 1918 where he continued to fly Bristol Fighters. He was engaged in patrol, reconnaissance, escort, bombing and despatches in places such as Kutrani, Biara, Waddy Fara and Haifa. Thompson ceased flying on 15 January 1919 and he returned to Australia shortly afterwards. Thompson is mentioned in Vol. VIII AFC, The Official History of Australia for his efforts on an escort and reconnaissance mission on 14 August 1918.