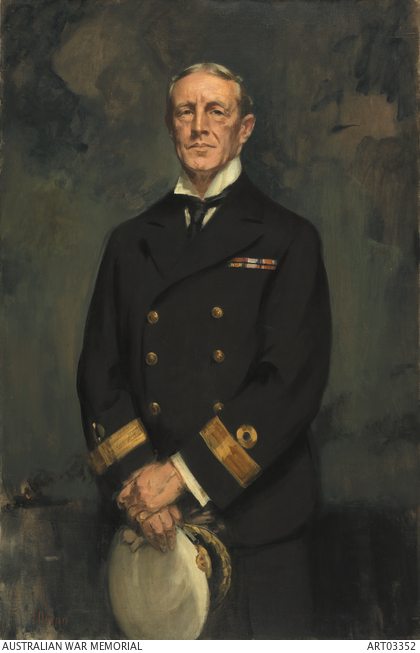 John Glossop was a naval officer who commanded HMAS Sydney for much of the First World War. He was born on 23 October 1871 at Twickenham in England. As a young man he served in the Royal Navy, and in 1888, at the age of 18, first visited Australia as a midshipman on HMS Orlando, flagship of the Australia squadron.

Glossop served in the Pacific and reached the rank of lieutenant in 1893. He returned to the Australian Station in 1896 as the Navigation Officer on HMS Royalist. In the early years of the 20th century, Glossop's career brought him back and forth from England to Australia and the Pacific several times. In June 1911 he was promoted to captain and in 1913 was given command of a new light cruiser, HMAS Sydney. Sydney was given an enthusiastic reception when she steamed into Sydney Harbour in October that year.

Just over a year later Glossop was in command of Sydney as she escorted the first AIF convoy to the Middle East. He had already served off New Guinea and participated in the capture of Rabaul, but Glossop's first significant action was against the German cruiser Emden off the Cocos Islands in the Indian Ocean. The Emden, outgunned and slower than Sydney, managed to hit the Australian ship with her opening salvo but thereafter came under sustained and accurate fire. Damaged beyond repair, she ran ashore. Sydney then sank her collier, Buresk, and returned to finish off Emden. Rejoining the convoy, Glossop received the congratulations of the Australian Naval Board, though he later recalled that firing on the enemy ship, particularly once she had run ashore but refused to surrender, made him feel "like a murderer."

For Glossop, the remainder of the war was relatively peaceful as he commanded Sydney on patrol in the Caribbean, the Atlantic, and the North Sea. He was relieved in February 1917 and returned to Australia to accept the position of Captain-in-Charge of Naval Establishments in Sydney. Glossop married Ethel McPhillamy in January 1918.

His had been a successful war: Glossop earned the Japanese Order of the Rising Sun and the French Legion d'Honneur, as well as having been Mentioned in Despatches and appointed Commander of the Bath after destroying the Emden. After the war, on 1 March 1919, he was promoted to commodore 2nd class; in June he presided over the court martial of mutineers from HMAS Australia, handing down severe sentences that led to his being attacked in parliament.

Glossop returned to the Royal Navy in 1920 and was promoted to rear admiral on 21 November 1921, and retired the next day. He remained in England, where he died on 23 December 1934.