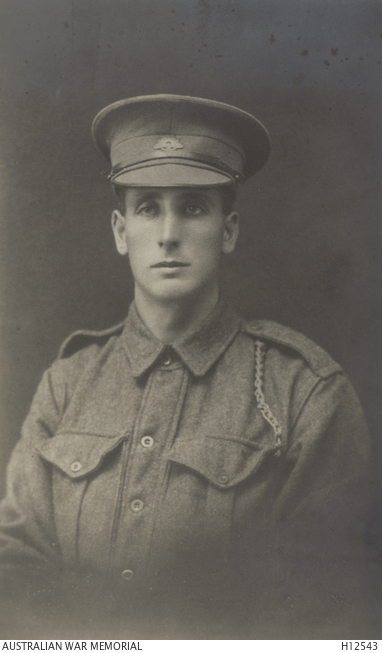 Hugh Barr was born in 1886 at Larne, Ireland. After attending Olderfleet National School at Larne he trained as a fitter’s helper. Barr moved out to Australia in his mid-twenties and took up work as a seaman, working out of Fremantle on the Western Australian Government steamer Western Australia. After the outbreak of the First World War he continued working as a seaman until 18 January 1916 when he enlisted with the Australian Imperial Force (AIF) at Perth. The 30-year-old was allotted the service number 337 and the rank of private and assigned to the newly-formed 44th Infantry Battalion. The battalion left Australia on 6 June 1916, embarking from Fremantle upon the troopship HMAT Suevic.

Barr and the battalion arrived in England on 21 July and spent several months in further training. The men finally arrived in France on 27 November and entered the front line trenches of the Western Front for the first time on 29 December. They spent the bleak winter of 1916-1917 alternating between front line service, and training and labouring in the rear areas. In January 1917, Barr was hospitalised with a septic foot and the following month tonsillitis. The battalion fought in its first major battle at Messines in Belgium between 7 and 10 June 1917. In the months that followed it was heavily employed in the Ypres sector in costly defensive operations. In letters home to his mother, Barr wrote of the strain the battalion was under in the sector, including the high casualties and incessant mud. In one letter in August he wrote that there were not many “old boys” left in the battalion. That same month Barr was promoted to the rank of corporal. In September he was promoted to the rank of lance sergeant and the following month was promoted temporarily to the rank of sergeant. Barr always demonstrated a deep concern for his mother in Ireland, writing that he would be sending her the extra money he gained from his promotions.

The next major attack the battalion participated in took place at Broodseinde Ridge on 4 October. Just over a week later, on 13 October 1917, Barr was killed in action between Ypres and Passchendaele. He was killed instantly by a shell and was soon after buried by his comrades. Barr was 31 years old. In letters to his mother, his company commander and battalion adjutant both wrote of his devotion to duty, bravery and conscientiousness, lauding him as a true soldier. Of the 992 men of the battalion who were involved in operations around Ypres, only 158 emerged unwounded when the battalion was finally relieved on 21 October. On 28 January 1918, Barr was posthumously awarded the Military Medal. Hugh Barr is commemorated at the Menin Gate Memorial, Ypres, Belgium. 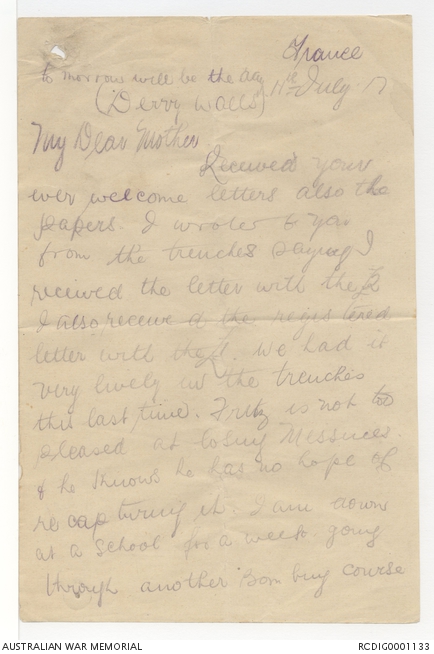 Letters from Hugh Barr to his mother, 1917

Letters from Hugh Barr to his mother, 1917 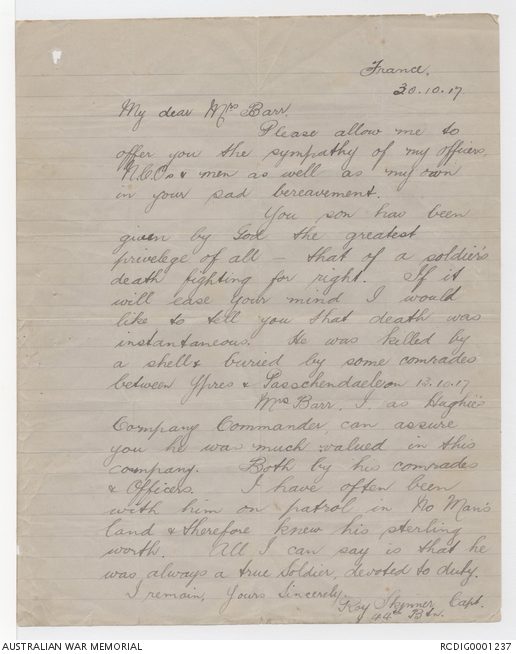