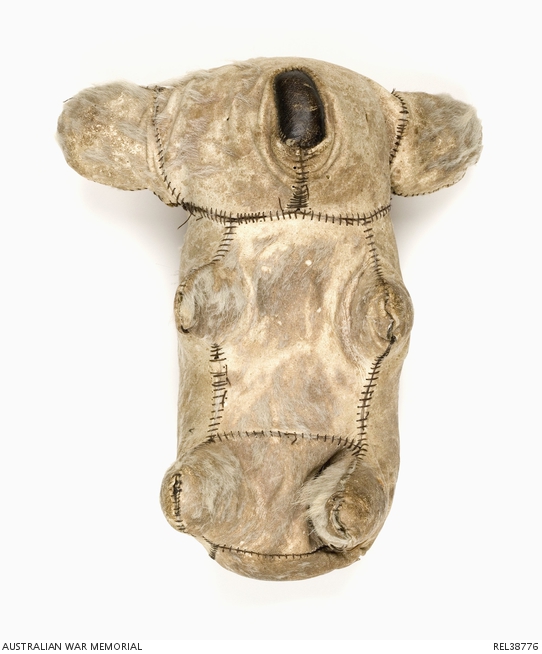 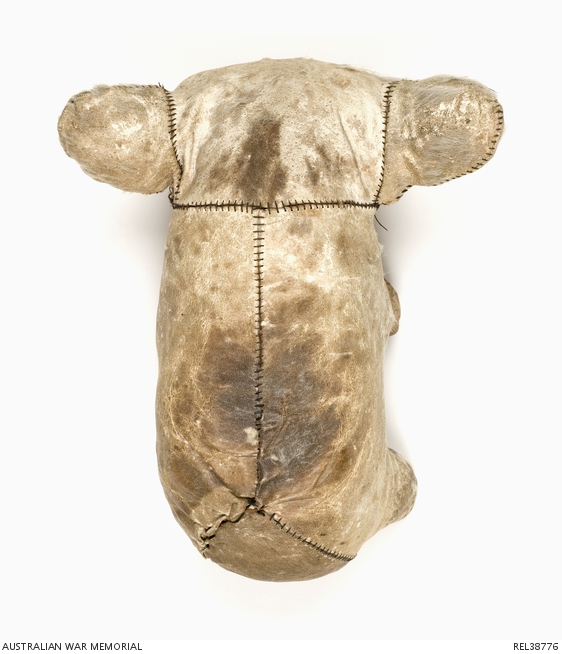 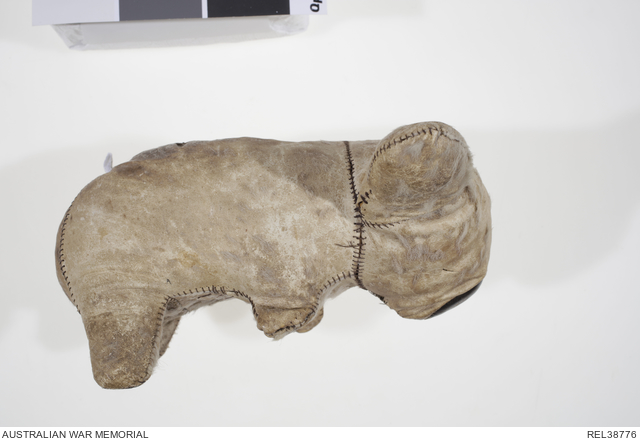 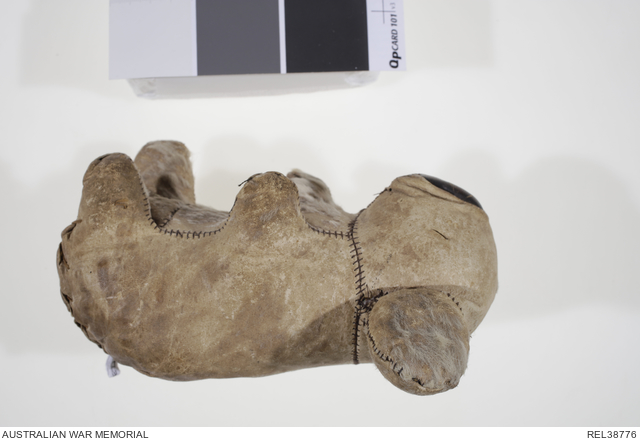 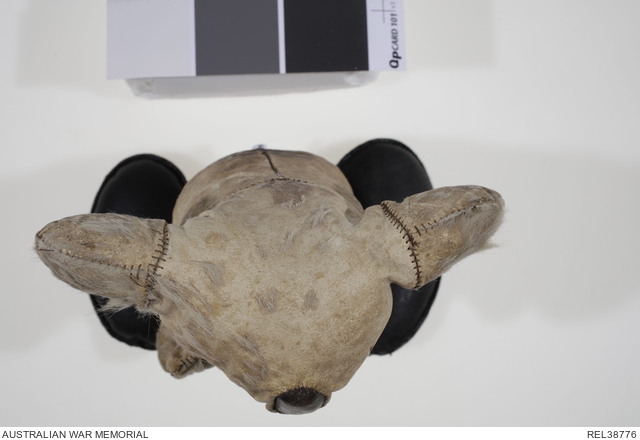 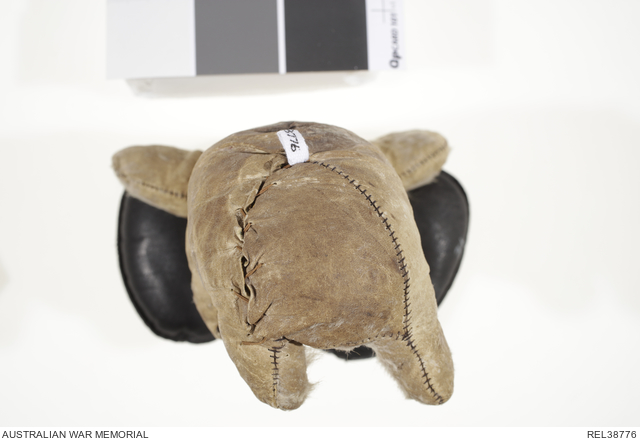 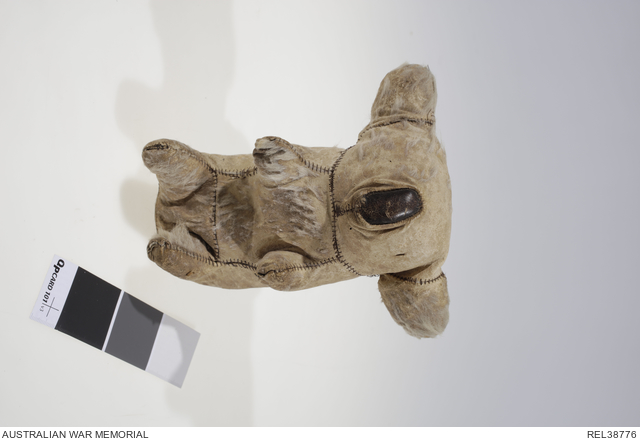 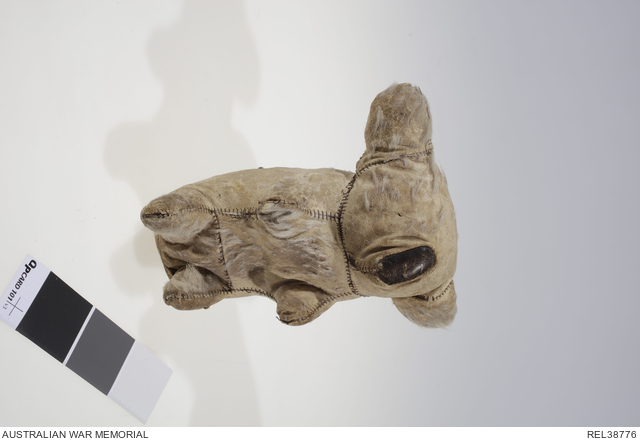 Toy koala made from panels of kangaroo hide, with a black leather nose. Most of the grey fur is now missing, as are the original glass eyes.

After initial pilot training at 5 Elementary Flying Training School at Narromine, NSW, Hibbens was sent to Canada for further flying experience with the Empire Air Training Scheme, arriving there in April 1941. Ethel Hibbens, then living in Orange, NSW, picked gum leaves before writing messages on them and sending them to her son in Canada (see REL38775) and it is thought that she may have sent Anzac the koala at the same time. Hibbens graduated as an airman pilot on 13 September 1941, after training at Camp Borden and Halifax, and was promoted to sergeant. He subsequently carried Anzac in his cockpit on every flight he made, as a lucky mascot. Shortly afterwards he moved to the United Kingdom to undertake training as a Spitfire pilot, attached to 234 Squadron at Ibsley in Hampshire.

In April 1942 he was posted to service in the Middle East to fly Spitfires with 145 Squadron RAF. He travelled to his destination in Egypt via Sierra Leone. After completing only eight operational sorties with his squadron, Hibbens was detailed to transport a Hawker Hurricane fighter to 33 Squadron RAF, at Landing Ground 154 near Alexandria during the First Battle of El Alamein, on 18 July 1942. Hibbens encountered a sandstorm, turned to the east to avoid it, and was then blown off course by wind and attacked by 13 German Me109 fighter aircraft. His aircraft was badly damaged and running out of fuel when he crashed close to German tanks near the El Alamein front line. He was not injured, and took Anzac with him as he left the aircraft. He was immediately captured and taken to Mersa Matruh on the coast, before being transported to a prisoner of war camp at Frankfurt-am-Main in Germany.

In August 1942 he was transferred to Stalag VIIIB (later Stalag 344) at Lamsdorf, where he remained until January 1945. It is thought that Anzac was given by Hibbens to a British prisoner being repatriated to England on humanitarian grounds in 1943, with instructions to return him to his family in Australia with a message that he was alive and well. The Englishman apparently forgot the address and instead left Anzac at RAAF House in London, where he was placed behind the counter and reunited with his owner after the war in Europe had ended. Hibbens was twice promoted while a prisoner, to flight sergeant in May 1943, and to warrant officer in May 1944.

In January 1945, during an exceptionally cold winter, the Germans began moving many of their Allied prisoners across Germany in a series of forced marches, later called by the survivors, the 'Death Marches', or 'The March'. It was during the march of prisoners across Czechoslovakia that Hibbens made his final, and successful, bid to escape, the fifth he had attempted. Sheltered by members of the Czech resistance for three weeks he eventually reached the US Lines of the Air Signals Corps attached to the US 2nd Army at Kdyne, near the Austrian-Czech border, and accompanied them to Berlin, from where he was evacuated to Britain. Despite his request to be repatriated to Australia as soon as possible to fight the Japanese Hibbens returned home after the end of the war in the Pacific. He was discharged on 20 November 1945.

Anzac was again used as an aircraft lucky mascot in the early 1970s when Hibbens' daughter, Jenny, learned to fly and obtained her pilot's license.