Captured in colour: rare photographs from the First World War - The French autochromists

In the short time between its creation and the outbreak of war, the new colour technology had been eagerly adopted by a growing number of amateur and professional photographers in France. The “autochromists”, as they called themselves, found a ready market for their work.

The war photography of autochromists such as Paul Castelnau, Fernand Cuville, Albert Samama-Chikli, Jules Gervais-Courtellemont and Léon Gimpel continued the photographic styles and traditions of the preceding years. France’s rapid colonial expansion had generated a growing public demand for views of exotic lands and people. Such images were also collected eagerly by enthusiasts interested in the study of social geography. The new colour technology had been welcomed by photographers interested in using photography as an art form, believing it offered greater potential for rendering natural detail. The work of the autochromists often combined this interest in both geography and art, producing charming, carefully composed views of French national life.

The autochromists on the Western Front brought the same concern for scenic detail and artistic expression to the task of recording the war’s senseless devastation. Their work paid homage to the beauty of what had been destroyed, and expressed the hope that it would one day be rebuilt after victory. 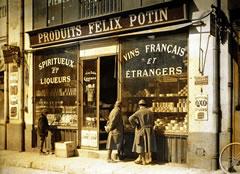 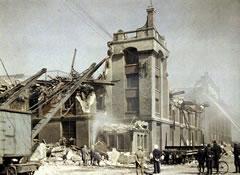