Gervais-Courtellemont had a passion for travel and photography. A contemporary described him as having “a head full of dreams and two feet on the ground”. He was born in the province of Seine-et-Marne, near Paris, but grew up in Algeria, and devoted most of his professional career in search of the exotic. Images collected in Turkey, Palestine, Egypt, Tunisia, Spain, India, Morocco and China formed the basis for his popular illustrated lectures, which he illustrated with lantern slides.

Courtellemont returned to his home province to record the war. His work reflects the photographic traditions of the autochrome. Landscapes are carefully composed, with due attention to lighting and placement within the picture frame. He used symbols such as the lonely cross and the charred tree for dramatic effect. Judging from the popularity of his lectures in Paris during the war, and the series of publications featuring the battles of Marne and Verdun, his autochromes had the ability to attract a great deal of public interest. 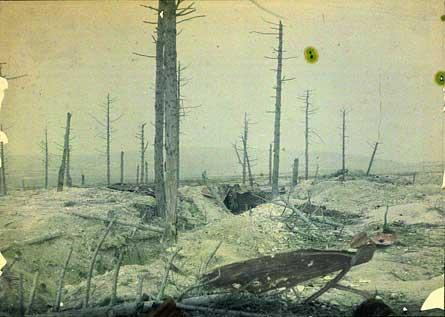 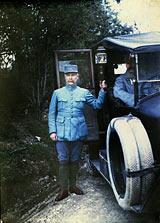 Henri-Philippe Pétain was a 58-year-old colonel in 1914. He gained rapid promotion early in the war and commanded a French army group at Verdun. He became commander-in-chief of the French army in May 1917 and was promoted to field marshal in November 1918. Pétain led the Vichy French government in the Second World War. In August 1945, he was condemned to death as a collaborator, but the following year his sentence was commuted to life imprisonment by General Charles de Gaulle. He died in 1951. 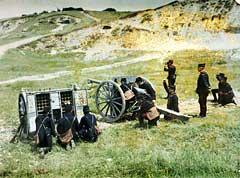 The famous 75-millimetre quick-firing field gun was the mainstay of French field artillery throughout the First World War. 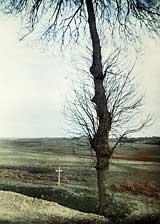