In 1915 Gimpel befriended a group of children from the Grenata Street neighbourhood in Paris who had established their own “army”. He began to visit them regularly on Sundays, helping them to build their arsenal from whatever was to hand, providing direction in “casting”, and recording with his camera the army’s triumphs over the evil enemy, the Boche.

Gimpel was charmed by these children and came to know each of them well: the “chief”, the eldest in the garrison; his friend, who was conscripted to play the unenviable role of the Boche; and Pépète, who was “small, slightly misshaped, rather scrofulous, looking somewhat like a gnome” but who nonetheless played the part of an ace aviator. At the end of each session, Gimpel would reward the troops with barley sugar, causing all to shout with one voice, “Long live the photograph!” 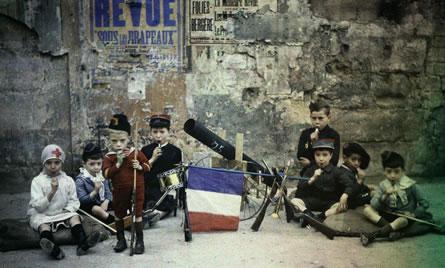 The troops enjoy a well-deserved rest while savouring the barley sugar sticks offered by the photographer, SFP 806/259-A

On one occasion I parodied the famous painting “The Dream” by [Edouard] Detaille … All around, the army at rest, licking the barley sugars provided from the photographer’s stores, behind, the artillery, and in the background, a wall covered with posters, from which was glaring, like a true accomplice, a most fitting music hall poster entitled “Review under the flag!” 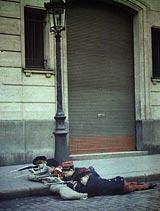 I recorded all the Grenata Street Army’s manoeuvres and operations first in black, then on hypersensitive autochrome plates. The neighbourhood where I was working was perfect for this purpose: adjoining and akin to the “Senitier”, its main activity consisted almost exclusively of wholesale trading firms: it thus offered, on Sundays, the calm of a little provincial town. 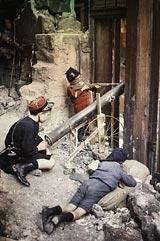 The defence of the house in ruins provided me with a shot full of the picturesque, with my soldiers taking cover in house corners and the 75 gun in full view, as always. 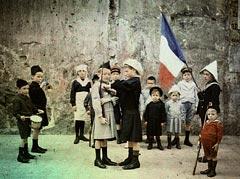 Troops receiving their decoration, SFP 806/251-A

My Army possessed nothing but a Belgian flag … with due respect for the colours of valiant Belgium, we could not possibly fly this flag. I was just going to add a tricolour to my shopping list when the chief confided that such a flag did already exist, but that one of the mothers had taken it out of circulation so it would stay intact until Victory Day.

Gimpel was able to retrieve the desired flag. 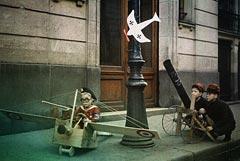 Its fuselage was made of a box; the machine-gun of a coffee grinder, to which was added a section of a broom handle, and a propellor which could be rotated.

In mid-flight, Pépète’s plane is up in the sky, hanging from a street light, and, with a magistral machine-gun sweeping (a coffee grinder, as you remember), the famous pilot has just brought down his enemy, who is now nosediving towards the ground. 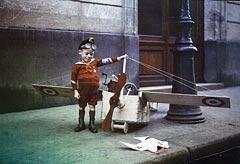 The famous pilot Pépète triumphs in front of his victim, SFP 806/252-A

In a flattering pose, one hand on his plane’s wing, Pépète, with an expression of triumphant joy impossible to describe, contemplates his panting victim, crashed on the ground.

The Boche is captured 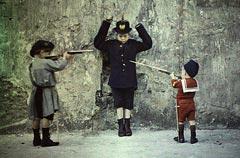 The Boche … on his head, an old bowler hat embellished with a two-headed paper eagle and topped with a carrot in lieu of a tip. For him to accept to play this role, we had to proceed by surprise and put on his head this fancy pointed helmet quite unexpectedly … after each session the tip of the helmet was devoured with enthusiasm. 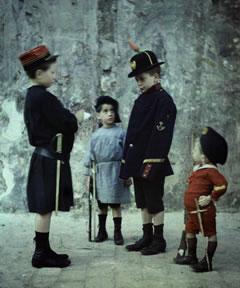 The prisoner, framed by two privates, one of whom is Pépète, is being interrogated by the chief. 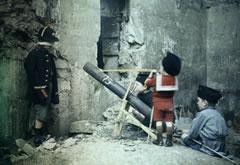 The condemned prisoner had already been blindfolded, and I was ready to put the classic firing squad into its classic position, when the chief interrupted … A few minutes later he was back … with the cannon. “To execute a Boche”, he said, “nothing but a cannon will do.”