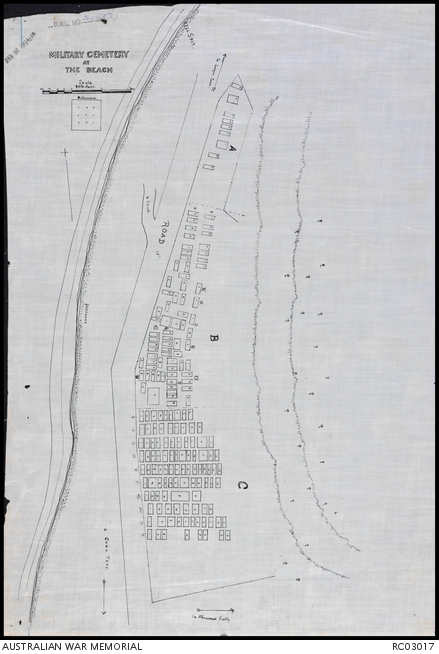 Situated at Hell Spit, south of Ari Burnu, the Beach Cemetery (also known as Hell Spit Cemetery) was used from the 25 April 1915 until near the end of the campaign. The cemetery was very dangerous as it was within range of the Turkish gun called “Beachy Bill”. This gun was credited with causing over a thousand casualties on the beach at Hell Spit. All the crosses and headstones at Beach Cemetery had been riddled with bullets, and some were completely destroyed by shell fire.

After the evacuation, the crosses were used for firewood by the remaining Turks and the cemetery vanished from view. When Pope Benedict XV sent an envoy to check on the cemeteries in 1916, the Turkish War Office remade the Beach Cemetery so that it appeared to be well-tended. They created burial mounds with rock borders, but these mounds did not match the direction of the original graves underneath. In 1919, when the Graves Registration Unit tried to find the graves, this plan of the cemetery helped them locate the general positions and directions of the graves underneath the remade cemetery.

One of the more famous members of the Australian Imperial Force – Private John Simpson Kirkpatrick (“the man with the donkey”) is buried at Beach Cemetery. He served under the name John Simpson and was one of the soldiers at Gallipoli who used donkeys and mules to assist men with leg wounds to reach medical assistance. After he died from a sniper shot, he became an Australian icon for his work.