Out in the Cold: Australia's involvement in the Korean War - Korea and the Cold War

The Cold War is the name given to the conflict that developed between the United States and the Soviet Union after the Second World War. Simply put, the Cold War was a conflict of opposing ideologies - capitalism and communism. Although there were no actual battles or physical conflicts, the fear and hostility it produced on both sides made it a war as dangerous as any other.

The US/USSR antagonism began in postwar Europe, when the Soviet Union brought Eastern Europe under its control and the United States exerted its influence in Western Europe. Germany had been divided into two nations; the wall that separated its former capital Berlin, came to symbolise the mutual exclusion of the two ideologies. The fall of the Berlin Wall in 1989 signalled the end of the Cold War; the breakdown of the Soviet Union soon followed, in 1991. For more details see the list of significant Cold War events.

The fight over Korea in the 1950s was a turning point, when the ideological conflict extended beyond Europe and broke out in open warfare. It transformed a civil conflict into an armed confrontation between the major powers of the world. 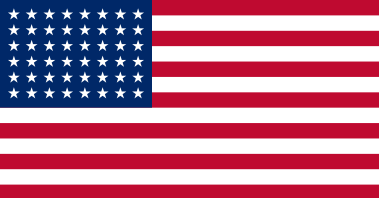 Flag of the United States in 1950. There are only 48 stars, as Alaska and Hawaii had not yet been granted statehood. 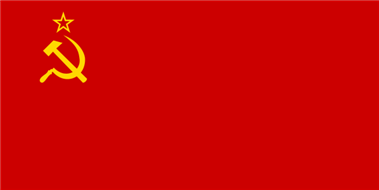 Berlin Blockade - July 1948-May 1949
Berlin, isolated in the Soviet zone of occupied Germany, was blockaded by the Russians in an attempt to force the western allies from the city or to compel them to abandon plans for West German integration. In response the allies began an airlift of food and supplies to Berlin which lasted for eleven months until the Soviets backed down. RAAF aircraft took part in the airlift.
Communist victory in China - February 1949
Civil war between the nationalist Kuomintang and the communists had raged in China since the defeat of Japan in 1945. In 1949 after driving the nationalists from the mainland to the island of Taiwan the communists established government in China.
First Soviet atomic test - September 1949
The United States had possessed a monopoly in nuclear weapons for four years after the end of the Second World War. In 1949 Russia successfully tested a nuclear device, thus beginning the nuclear stand-off which was to characterise the Cold War for the next 40 years.
Korean War - 1950-1953
The Korean War began when the armed forces of North Korea invaded South Korea across the 38th parallel in June 1950. Three years later the war ended where it had begun after forces from the South Korea and the United nations had fought North Korean and Chinese troops to a stalemate.
Australian forces sent to Malayan emergency - June 1950
The Malayan Emergency was declared in June 1948 in response to Communist insurgency. Australian involvement began in June 1950 when RAAF units arrived in Singapore. By 1955 when Australian ground forces became involved the Emergency was winding down but much mopping-up remained to be done.
Australia, Communist powers referendum defeated - September 1950
The Menzies Government was elected in 1949 with a platform which included banning the Communist Party. A Bill for this purpose was passed, but later declared by the High Court to be constitutionally invalid and a Referendum to amend the Constitution giving the Commonwealth the power to ban communism was narrowly defeated.
Atomic weapons tests
A series of atomic weapons tests were conducted in Australia at the request of the British Government between 1952 and 1956. Twelve weapons were exploded in Australia, three at the Monte Bello Islands off north Western Australia and the remainder in the central desert regions of South Australia, at Emu Field and Maralinga. Hundreds of minor trials, mostly involving components of nuclear weapons, also took place in South Australia 1953 and 1963.
Petrov defection - 19 May 1954
Vladimir Petrov, a Soviet diplomat and spy, sought and was granted asylum in Australia. Petrov provided documents and oral information about Soviet espionage activities in Australia to the Australian security service and a Royal Commission was established to inquire into the affair.
Anti-Soviet uprising in Hungary - 1956
In October 1956 demonstrations in Budapest led to the overthrow of the Communist Government. The new administration announced Hungary's withdrawal from the Warsaw Pact. Soviet troops entered Budapest on 1 November to quell the uprising and install a new pro-Soviet government.
Berlin Wall constructed - August 1961
By 1961 thousands of people were fleeing East Germany for the West Berlin every day. To prevent this exodus the government built a wall dividing the two halves of the city. In ensuing years 190 people lost their lives trying cross the wall.
Cuban missile crisis - October 1962
In 1962 the Soviet Union deployed nuclear missiles in Cuba. The United States blockaded Cuba and demanded that the missiles be withdrawn. The crisis was resolved when Russia agreed to withdraw the missiles in exchange for lifting the blockade and agreeing to withdraw missiles from Turkey. In the aftermath of the crisis a hotline was established between the White House and the Kremlin to facilitate communication between the leaders of the two countries.
Australia announces initial military involvement in Vietnam - May 1962
Following representations by the United States, the Australian Government announced in May 1962 the commitment of 30 military advisers to assist the Army of the Republic of [South] Vietnam. The Australians were initially deployed as instructors and were not permitted to accompany the South Vietnamese into combat. In 1965, Australia's commitment to the war was stepped up to include combat troops.
Australian forces engaged in Confrontation - March 1965
Confrontation was a small undeclared war fought between 1962-1966 during which Indonesia sought to destabilise the newly independent Malaysia. After two Indonesian raids on the Malayan peninsula in 1964 the Australian government deployed a battalion in Borneo. Indonesia and Malaysia signed a peace treaty in 1966.
Soviet invasion of Czechoslovakia - 1968
The Soviet Union, concerned that a reformist Government in Czechoslovakia would lead to Czechoslovakia's withdrawal from the Soviet bloc, invaded on August 20 1968 deposing the president and replacing him with a pro-Soviet leader.
Arms-reduction talks - 1969 to 1993
Arms control talks were a feature of the final two decades of the Cold War. The Strategic Arms Limitation Talks (SALT) between the United States and the Soviet Union resulted in two arms reduction treaties in the 1970s. After the Cold War had ended the Strategic Arms Reduction Treaties (START 1 and II) resulted in limitations being placed on the ability of either side to launch a successful first strike.
Detente - 1970s
During the 1970s Cold War tensions between the United States and the Soviet Union eased. The period of détente included political summit conferences, economic agreements leading to increased trade, and strategic arms limitations agreements. Détente ended with the Soviet invasion of Afghanistan in 1979.
Soviet Invasion of Afghanistan - 24 December 1979
Russia intervened in Afghanistan in 1979 to support a pro-Soviet government. Ultimately the Soviets were unsuccessful in restoring the government's authority and in 1989 withdrew their armed forces leaving behind a civil war which persists to the present day. The war resulted in 15,000 Russian and over a million Afghan deaths.
Berlin wall demolished - November 1989
With Soviet control over Eastern Europe breaking down, thousands began fleeing to the west through the newly opened border between Hungary and Austria. When the East German/Hungarian border was closed to prevent the exodus demonstrations broke out. The East German Government was unable to stem the popular uprising and within three weeks the Berlin wall was destroyed.