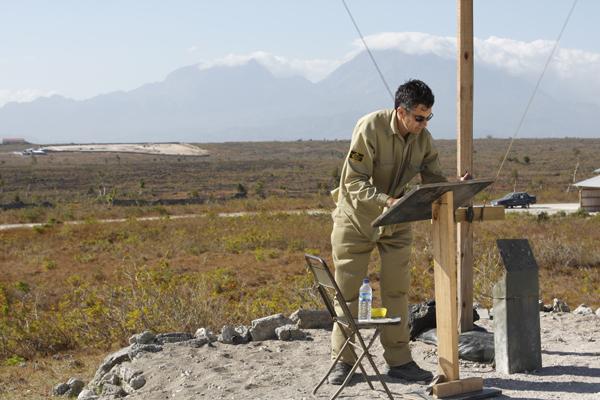 Jon Cattapan is a Melbourne based artist whose works deal primarily with political and social representations of the urban environment.  He was born in Melbourne in 1956 and began studying art at the Royal Melbourne Institute of Technology in 1975 after transferring from the first year of a computer science degree.

In 2006 The Potter Museum of Art, University of Melbourne held The Drowned World: Jon cattapan works and collaborations, a major thirty year survey. In 2008 a monograph Jon Cattapan: Possible Histories written by Dr Chris McAuliffe was published by Miegunyah Press. Cattapan has also been the recipient of several of several prestigious travelling scholarships and grants. 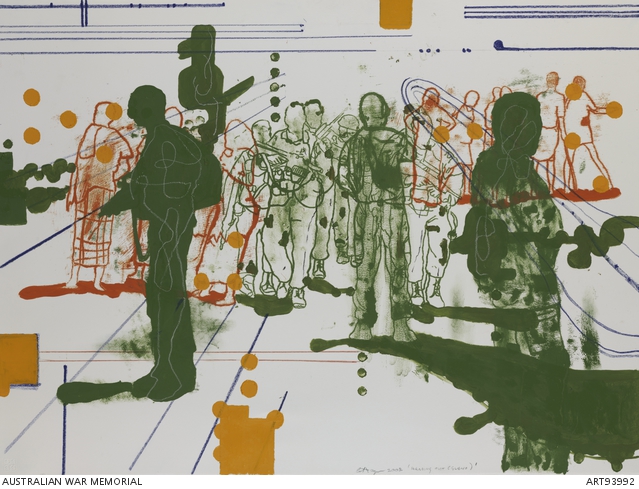 Heading out (Gleno), 2008, oil and coloured pencil on paper, by Jon Cattapan

Jon Cattapan has always been interested in the human condition: in particular, he believes it is the role of artists to bear witness to what happens in the societies, and communities, in which they live. The works Cattapan has produced from his experiences in Timor–Leste offer an excellent opportunity to study his creative process and the visual vocabulary he has been able to achieve in his artistic practice.

Cattapan works in the traditional mediums of painting and drawing, yet his starting point is often digital technologies. The monoprint drawings he calls the Carbon group are composites of digital photographs taken by the artist during his time in Timor–Leste. The works are created by a process which mimics the use of old-fashioned carbon copies. The images are not exact replicas, but drawn freehand from printouts of the digital photographs and traced onto paper. This transfer process gives the resulting works a heightened sense of removal from the events the artist witnessed, so that they become, in effect, an imaginative retelling of these events.

While they are highly subjective, Cattapan’s works evoke a clear sense of being in Timor–Leste and of the magnitude of the task the soldiers have taken on. The different layers in the works reflect broader political and ethical themes: the relationship between Australia and Timor–Leste, Australia’s role as a peacekeeper, and recent instances of violence and unrest. The uncertain future of this fragile state and its tentative steps towards becoming part of a global community are echoed in the works.

Jon Cattapan has been interested in night scenes and the nature of nocturnal light since the mid-1980s. The Timor–Leste night vision works continue this fascination; they arose from his experience of viewing the landscape and soldiers through night vision goggles:

When you go out at night – and it’s very still and it’s very dark because there’s very little street lighting – there is this sense of the unexpected … this sort of slight anticipation … Those night vision goggles … had that glowing green look which automatically says to you surveillance, military … covert, potential danger.

Night vision goggles cut off the wearer’s peripheral field, which can create a sense of unease, the suspicion that something is about to happen just outside one’s field of vision. The paintings in this series are imbued with notions of anxiety and surveillance, and evoke in the viewer feelings of voyeurism and invasion of privacy. The soldiers here are both the observers and the observed. And there is a surreal quality to their experience of an unfamiliar land, heightened by the use of lush greens and luminous figures. This hints at the complex problems faced by peacekeepers as they try to communicate with people and integrate into their surroundings.

Dots and lines are overlaid on the night vision canvases, a technique Cattapan has used for more than 20 years. These represent codes, maps, or systems of unknown data. Yet for all their layered meanings, the night vision paintings, with their saturated colours, are seductively beautiful works that draw the viewer into a deeper engagement with their content.