The earliest sculptures made for the Memorial’s galleries reflect the desire to show Australian figures as literal but idealised examples of servicemen, drawing heavily on late 19th century models. Sculpture in Australia after the First World War was almost exclusively a public art intended to expand civic pride and promote national myth-making. Such work typically focused on narrative or moral content rather than experiments with form, materials and surfaces.

At this time some sculptors were engaged primarily to work on the dioramas – experimental, three-dimensional illustrations, combining painting and modelling. However, they sought other opportunities to make formal sculpture, creating symbolic tributes to the Australian experience of war that would show their skills to best advantage. The collection also includes the work of sculptors who chose to focus not on heroic deeds, but on other human qualities, such as compassion, vulnerability, isolation, and humour, all of which contribute to a sense of the experience of war from differing perspectives. 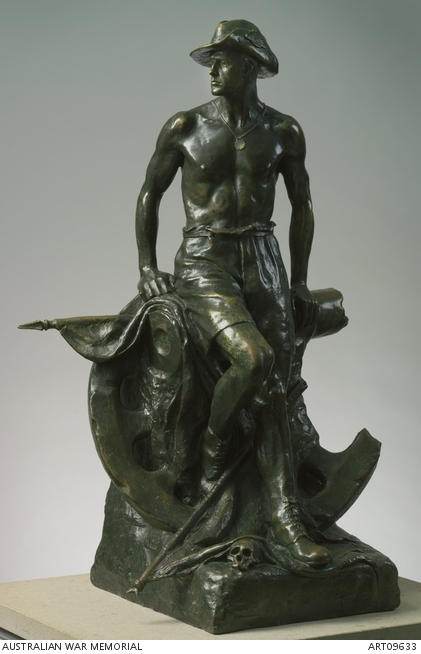 Wallace Anderson
Evacuation
Wallace Anderson served with the AIF in France from 1915 and later worked in the War Records Section, collecting artefacts for the Memorial, before becoming head of the modelling team for dioramas, touring France, Egypt and Palestine. From 1920 he worked on the administration, painting and modelling of dioramas, supervising their installation in 1936, and alterations from 1940 to 1946.
During this time he also produced bronze figurative sculptures that demonstrate his belief in the need to show the public the qualities of Australian servicemen, rather than just the details of war. Although initially enthusiastic for Charles Bean’s vision for the dioramas as high art, he came to feel that they were nothing more than coloured illustrations and that the mediums of painting and sculpture should be treated separately rather than mixed. He created Evacuation as an example of the way he thought sculpture could be used as a dignified form of commemoration, to elevate the spirit. 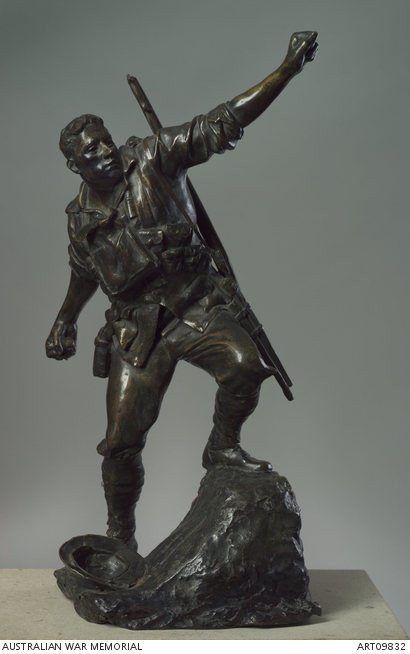 Web Gilbert
Bomber
Web Gilbert was the first head sculptor for the diorama scheme, but at the same time he continued to make other sculpture and memorials. Some of his figurative sculptures are similar in subject matter to the smaller figures he completed for the dioramas. Ideas for figurative compositions, such as Bomber and Over the top, that were later produced as finished bronze sculptures can be seen in the Mont St Quentin diorama, on display in the Western Front Gallery. 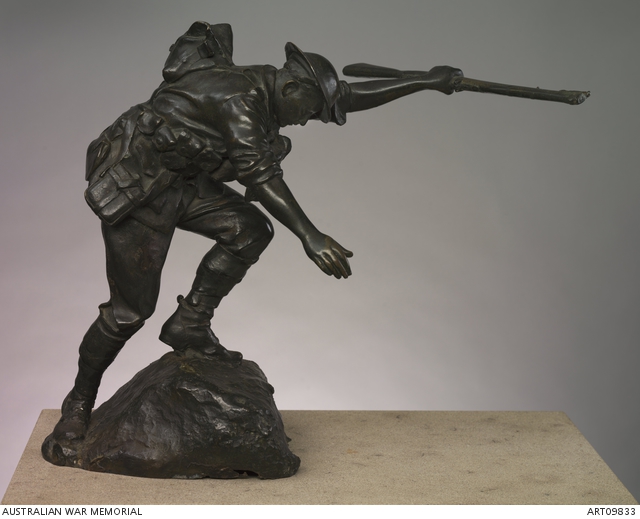 Web Gilbert
Over the top
Many of the sculptures acquired for the First World War galleries were produced by artists already employed for the diorama scheme, which saw them sent to battlefields to record details at first hand, and then engaged, some for over a decade, to re-create these scenes in three dimensions. For sculptors, this was an extraordinary commission, providing a rare opportunity for full-time work, but also leading to the production of additional sculptures for the galleries. 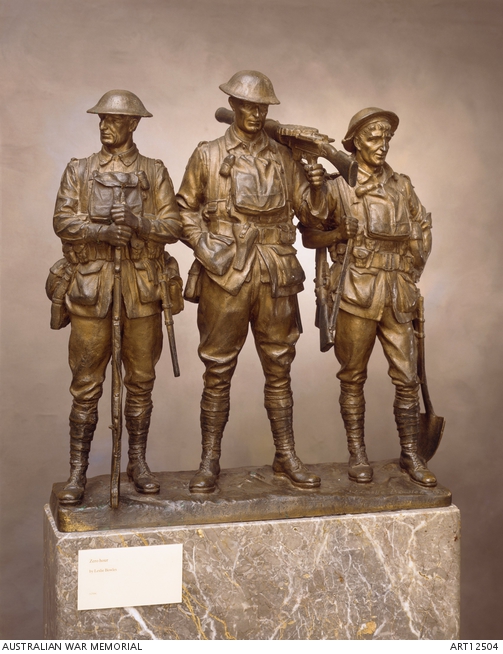 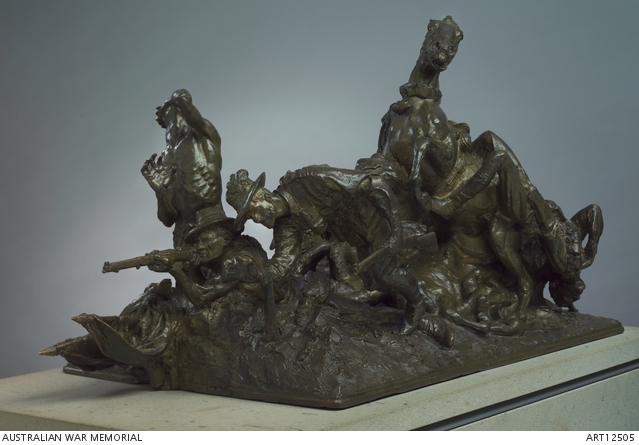 George Lambert
The ANZACs [maquette for Desert Mounted Corps memorial]
In 1917, the painter George Lambert was appointed as an official war artist to record the activities of the Australian Light Horse in Palestine. Later, at the age of 46, he began to work also in sculpture, and entered this maquette, The ANZACs, in the competition for the design of the memorial at Port Said to the Australian and New Zealand forces who fought in Sinai and Palestine. The competition was won by his contemporary, Web Gilbert, indicating the Australian preference at the time for a classical style over the naturalism evident in Lambert’s work.
This is the only sculpture in the collection apart from the dioramas that explicitly portrays the horrific reality of war, going so far as to show the moment of death in a manner designed to elicit a strong emotional response. 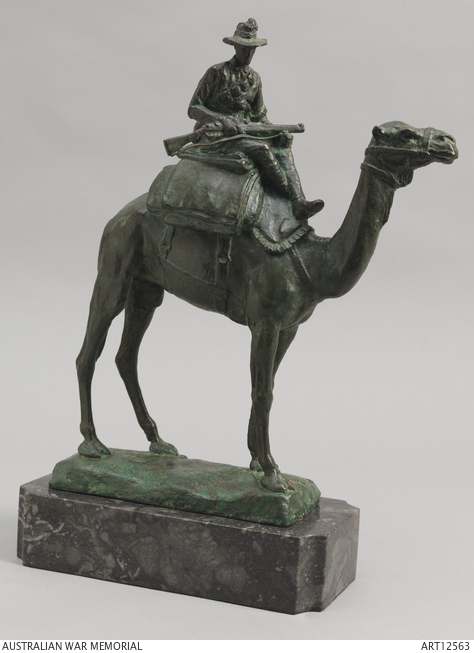 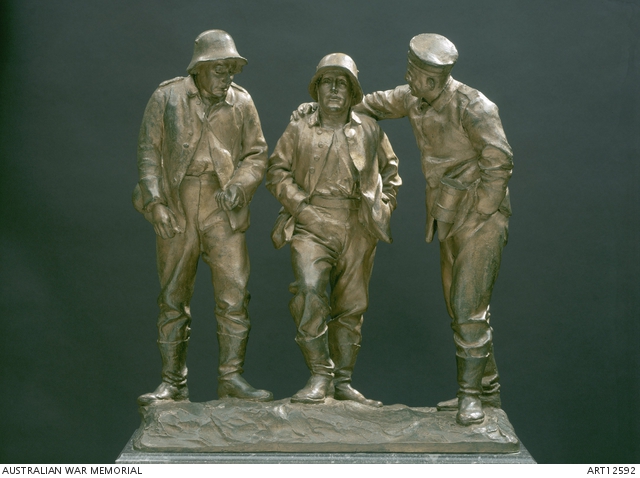 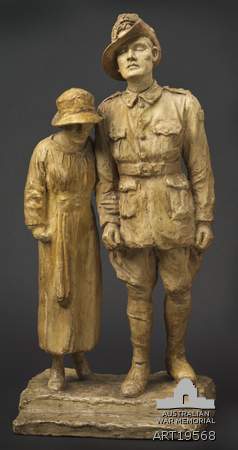 Clare Sheridan
Woman leading blind soldier
In her life, English writer and sculptor Clare Sheridan challenged convention and crossed many social boundaries. In her art, she also bridged ideologies: she sketched Mussolini, and sculpted busts of Gandhi, Lenin, Trotsky, as well as her cousin Sir Winston Churchill, whose politics she had come to appreciate just as he respected her creativity: Yes, my dear, we had to fight those Nazis it would have been too terrible had we failed. But in the end you have your art. The Empire I believed in has gone.’
Woman leading blind soldier was commissioned by the National War Museum in London, where a special sub-committee was set up to collect and display items pertaining to the women’s war effort. Sheridan made this second cast and gave it to the model, Trooper Ernest Charles Matheson, an Australian who served with the 9th Light Horse in Gallipoli and convalesced at St Dunstan’s Hospital for the Blind during 1915-17, where Sheridan met him. 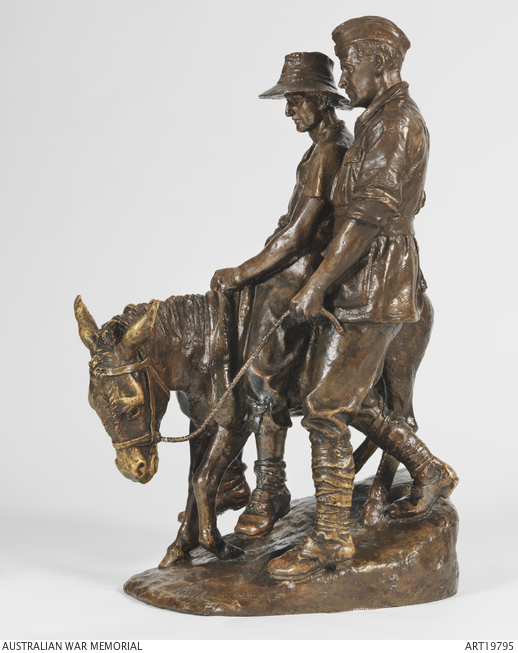 Leslie Bowles - The man with the donkey
A founding member of the Australian Academy, Bowles studied in Brisbane and London, where he became a studio assistant for Bertram McKennal. He enlisted in London after war broke out and served in Palestine and France in the Royal Tank Corps. Returning to Australia, he succeeded Web Gilbert, taking charge of sculpture for dioramas between 1924 and 1931. He also repaired and cast Web Gilbert’s Light Horse memorial and George Lambert’s Port Said memorial maquette, and completed the General Sir John Monash memorial and the King George V memorial in Melbourne. His belief that art should have a strong narrative and moral content is demonstrated in works like The man with the donkey. 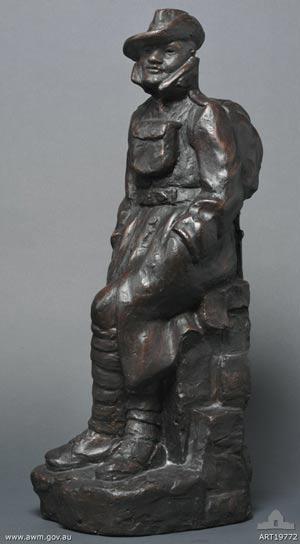 Merric Boyd
The old digger
Although known as a maker of pots who pioneered pottery as a fine art in Australia, Merric Boyd was also a sculptor. He worked prolifically for over four decades from the studio he built at Murrumbeena, near Melbourne. Boyd enlisted in the Australian Flying Corps in 1917. As part of a post-war rehabilitation scheme, he studied pottery at Wedgwood Potteries at Stoke-on-Trent, in Britain, absorbing new ideas and techniques. The old digger depicts an Australian soldier of the AIF, wearing slouch hat and great coat, with a gas mask and box respirator on his chest and canvas haversack on his back, resting on blocks of masonry at the front.

Boyd’s personal and expressionist work was largely ignored during his lifetime, as the mainstream’s critical interest in modernism saw his arts-and-crafts-inspired approach neglected. 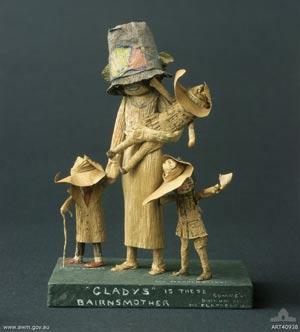 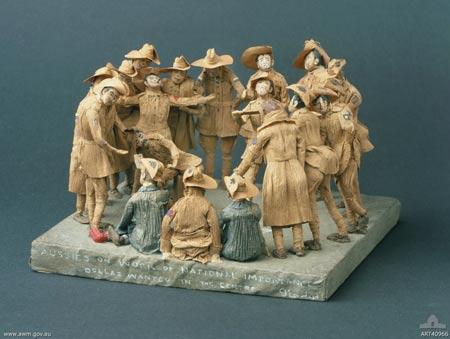