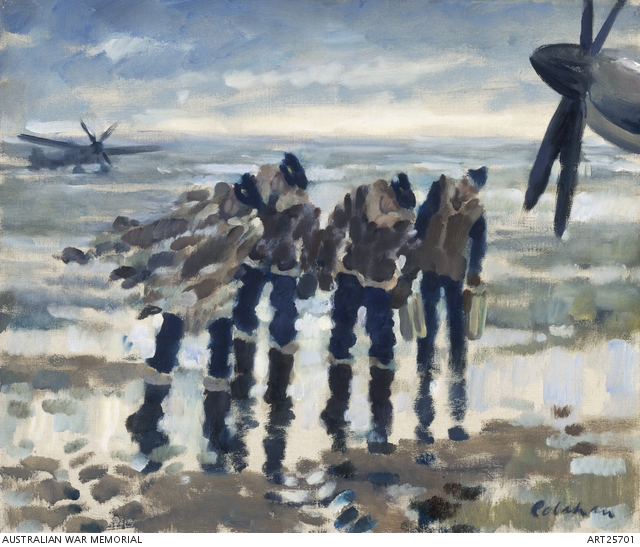 The experiences of Australia, Canada and Britain during the Second World War were shared ones. These countries were, after all, allies fighting a common enemy; they were also nations profoundly and historically linked politically, economically and socially; and, on notable occasions, they were involved in joint military operations. Geography, politics and military events created and shaped threats which demanded responses that were unique to each country. However, the common ground of Art and War - Australia, Britain and Canada in the Second World War is the impact the war had on individual lives: the men and women that feature in these works are shown waiting, preparing, fighting, suffering, celebrating.

The Commonwealth – Britain and the self-governing “dominions”, including Australia and Canada – entered the Second World War in September 1939. They all fought until the war’s end in 1945.

Theirs was a shared experience. British Spitfire pilots defended Darwin; Australians crewed landing craft taking Canadians to the beaches of Normandy, and Canadians became prisoners of the Japanese. Airmen of all three nations served together in the air war over Europe, and especially in the bomber offensive.

This exhibition recognises that the nations of the British Commonwealth shared the experience of the Second World War, and recorded that joint endeavour through art.

Shared Experience was an exhibition of paintings from the Australian War Memorial, Canadian War Museum and Imperial War Museum (UK), from 5 November 2005 to 26 February 2006.