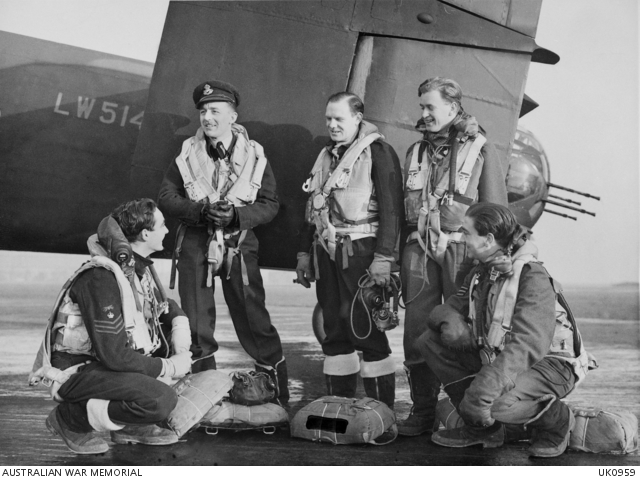 The crew of a Halifax aircraft of No. 466 Squadron RAAF, at RAF Station Leconfield.

There were usually seven men in a heavy bomber aircrew. Each was an essential element of a team, and had been selected for his particular skills. RAAF members came to England after extensive training in Australia, Rhodesia (now Zimbabwe), or Canada. A crew normally arrived at a squadron complete, having earlier formed and trained together. Men came from different parts of the Commonwealth. At first, Australians went to RAF squadrons, a practice that continued even after RAAF squadrons were formed. There were also many RAF aircrew in the Australian bomber squadrons. Supporting the aircrew was an extensive ground staff. The men most familiar with each aircraft were the engine and airframe fitters, electrical and instrument fitters, and armourers.

Aircrew tended to be young men; captains of aircraft were often only 20 years old. Each would be usually required to fly “a tour” of 30 operations before being posted to training or other units. Many flew further operations, often with the Pathfinders. Young airmen had to face death constantly on operations, and repeatedly, being called on to fly at every opportunity. They had to ignore risks, and relied upon their ability, training, teamwork and determination – and not a small amount of luck – to get through.

The pilot was the captain of the aircraft, responsible for flying it, while the navigator’s vital role was to get the aircraft to the target and on time. As the war went on, he was assisted more and more by a range of radio and radar aids.

The wireless operator had an essential role in a bomber. In a Lancaster, he sat in semi-darkness at his T1154/R1155 wireless, known as the Marconi, or “rainbow” set (because of its multi-coloured knobs), with his code book and air log, for recording all messages. Most communication with the outside world was by Morse code and, except for regular wind speed and direction reports, this was minimal. He was also kept busy assisting the navigator by establishing the bomber’s position from base radio transmissions, and it was his task to drop bundles of “window” – foil strips intended to confuse the German radar.

The flight-engineer kept a watch on the aircraft’s condition, monitoring the engines and conducting checks. The bomb aimer directed the pilot as the aircraft made its run up to the target; then, at the right moment, he released the bombs. He also manned the rarely used front turret guns. The rear and mid-upper gunners had machine-guns to fight off attacks, although their main role was to watch and provide warning of enemy fighters, the approach of other aircraft, or falling bombs. 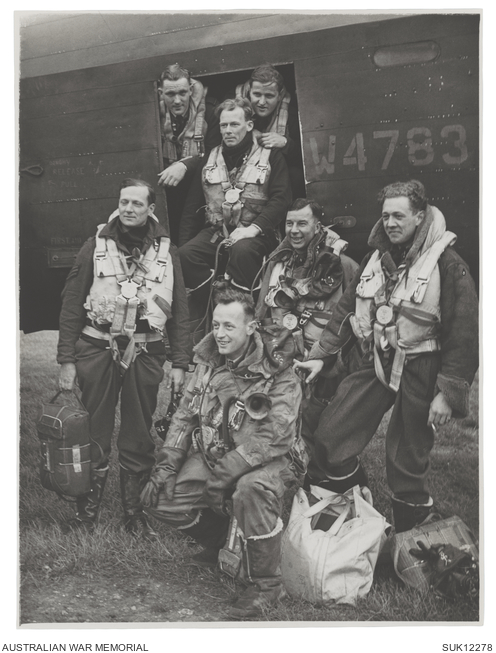