Operation Overlord and the Battle of Long Khanh

By June 1971 Australia had been involved in the Vietnam War for nine years. With no end in sight to an unpopular war, the Australians – like the Americans – were reducing their forces as they prepared to pull out of Vietnam.

The withdrawal would take time and would not be easy. Viet Cong and North Vietnamese Army forces began preparing to move troops from Long Khanh Province back into Phuoc Tuy Province, hoping to lure the Australians into a large-scale ambush in order to inflict a heavy defeat and a propaganda victory.

Aware of the enemy movement, the Australians launched Operation Overlord ­– named after the 1944 invasion of Normandy – aimed at destroying the enemy forces and preventing them from interfering with the province’s security and the Australian withdrawal.

On 5 June the Australians deployed by helicopter and armoured personnel carriers north to the province border of Phuoc Tuy, near the Courtenay Rubber Plantation. 3rd Battalion, The Royal Australian Regiment (3RAR) would take the lead in assaulting enemy positions, while 4RAR/NZ and American troops held blocking positions to trap enemy forces looking to escape. Australian armoured personnel carriers (APCs) from 3 Cavalry Regiment, tanks from 1 Armoured Regiment, artillery from 12 Field Regiment and sappers from 1 Field Squadron would also be in support. 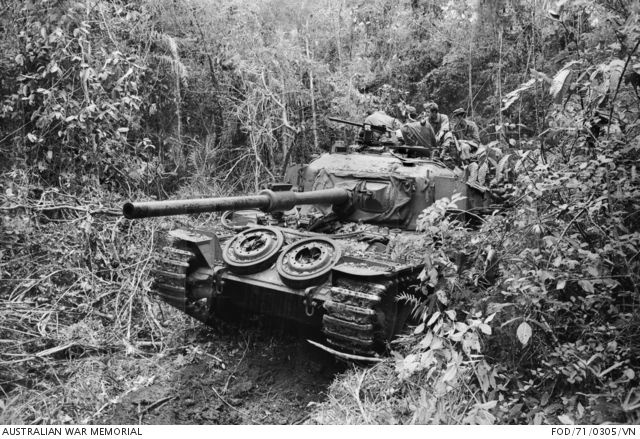 After two days patrolling, B Company, 3RAR had found what they thought was the main enemy position, just across the border in Long Khanh province. The next morning, 7 June, B Company’s 5 Platoon led by Lieutenant Graham Kells began a morning assault on the enemy positions. They had not gone far when automatic fire spewed from at least four enemy positions and the understrength platoon was pinned down, unable to move and with several men wounded. Trapped on the edge of a cleverly concealed bunker system, they called for artillery and air support. The Battle of Long Khanh had begun. Sergeant Eddie Desfontaines recalled:

In the initial burst of fire the platoon took a few casualties, the most serious being Private Mitchell who was shot through the throat. The platoon deployed; we realised that we were in deep poo. The platoon was receiving fire from the front as well as from the flanks (English, p. 33). 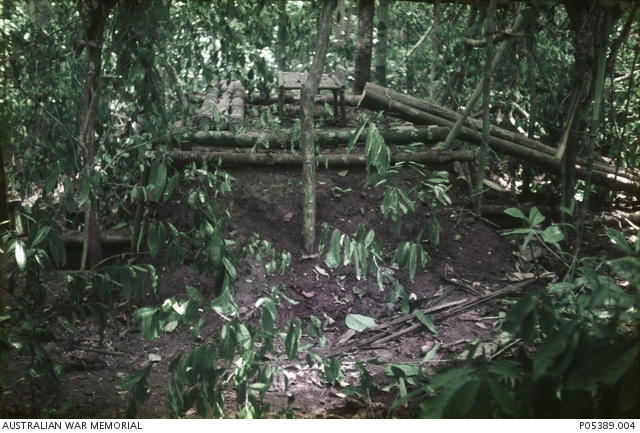 A typical enemy bunker encountered by the Australians on Operation Overlord. Most were very stoutly constructed and well concealed.

Without waiting for orders or infantry support, Centurion tanks of 5 Troop, C Squadron, 1 Armoured Regiment went forward, commanded by Second Lieutenant Bruce Cameron. At 07:15 the three tanks and one armoured recovery vehicle contacted the northwest edge of the enemy complex and immediately launched their attack. To fight their way through to the infantry platoon trapped 800 metres away on the opposite side of the bunker system would not be easy. The enemy bunkers were so sturdily constructed that the tanks couldn’t collapse them. Another problem was ammunition - there were more bunkers than the tankers had shells. The solution was to drive the Centurions on top of the bunkers where the crews could lean out of their hatches and drop grenades into them. A US helicopter gunship firing 50 metres in front of the tanks helped the advance to continue.

An hour later, another troop of tanks (3 Troop), arrived and joined the attack. As the tanks increased pressure upon the enemy, they were no longer able to concentrate their efforts on wiping out the infantrymen of 5 Platoon. Around 09:30 the rest of B Company reached 5 Platoon, and moved to shore up the flanks. Soon afterwards, D Company joined with the tanks, which had now been ordered to halt for resupply, and the Australians consolidated their positions.

By mid-morning the infantrymen were also running low on ammunition. RAAF helicopters were called in to deliver more and evacuate the wounded, bravely hovering low over the battle raging below. Later that morning one was shot down. Two men were killed in the crash and others were wounded. As air support and artillery kept the enemy at bay, other Australians managed to reach their comrades and bolster their defences. That afternoon the tanks, supported by D Company, swept through to finally link up with B Company. But all was now quiet. A tense night holding a defensive perimeter followed, but the Battle of Long Khanh was over. The enemy had in fact quietly withdrawn the previous afternoon.

Private Don Hannaford remembered the scene as they mopped up the following morning:

… we moved through the bunker system with the tanks. Once we left where the platoon’s position had been the day before, the jungle was just obliterated. I remember there were bits and pieces of human flesh and limbs all over the place, and blood trails everywhere. The enemy was obviously a very large force and they had taken every dead body they could carry with them, leaving virtually none behind (English, p. 54).

The enemy force encountered were elements of 3 Battalion, 33 North Vietnamese Army Regiment, comprised of some 40 members of its C10 Company, and some additional men from its C12 Heavy Weapons Company.

In this battle three Australians had been killed; one artillery forward observer hit during the initial firefight (Second Lieutenant Ian Mathers), and two RAAF men in the chopper crash, Flight Lieutenant Everitt Lance and Corporal David Dubber. Ten more men were wounded, including two of the chopper crew. While artillery and air support had been excellent, infantry-tank cooperation had been outstanding. Without the armoured support right there on the ground, the outcome for 5 Platoon might have been far more grim.

Operation Overlord continued and on 12 June the enemy ambushed Some Australian armoured personnel carriers patrolling the area of operations. A rocket propelled grenade hit an external storage bin on one vehicle containing 12-15 claymore mines, causing a massive explosion that killed seven on board and wounded others – the greatest number of Australian casualties in a single incident during the war. Overlord concluded two days later.

The operation was successful in driving the enemy from their bases in the area and thwarting plans for further incursions into Phuoc Tuy – at least temporarily. But the enemy force had not been destroyed; only six dead were found but likely more would have been carried away by their comrades. Ten Australians had been killed in action and 24 wounded. This was a stark reminder that the enemy was still dangerous and would fight to the bitter end. For their bravery under fire, eight Australians were recognised with awards including Lieutenant Kells who won a Military Cross. Second Lieutenant Bruce Cameron, commanding the tanks of 5 Troop was also awarded the Military Cross for this action, combined with another later in June. 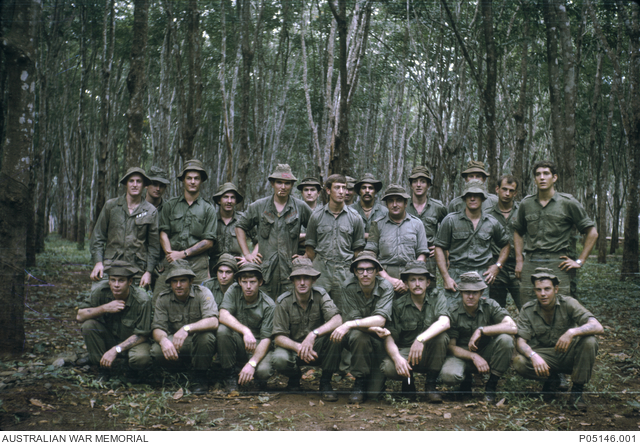 Survivors of 5 Platoon, B Company, 3 Battalion, The Royal Australian Regiment (3RAR) a fortnight after the Battle of Long Khanh in June 1971.